A new model of active engagement between villagers, the implementing non-profit and a corporate philanthropic foundation in Varoti village in Maharashtra shows a new way forward for development interventions through the corporate social responsibility route 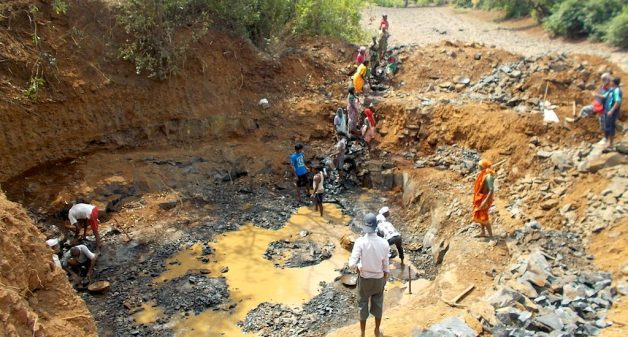 The villagers of Varoti contributed voluntary labor to build a well for drinking water. (Photo by Sunil Jorkar)

Varoti is like a desert in the proximity of an ocean. Situated just about 70 km from the fledging smart city of Pune, several high capacity storage dams such as Panshet, Varasgaon and Khadakvasla are in the vicinity of Varoti. Unfortunately, the dams were built to respond to the growing water requirements of city dwellers but never had the villages around them as the prime users.

Varoti is in the Velha block of Pune district, the most underdeveloped administrative block in the district. There was only one state transport bus that was plying daily to this village, but it has stopped recently. Of the 55 families, at least one man has migrated to either Pune or Mumbai for work.

While Velha and Varoti village receives an annual average rainfall of 2,000 mm to 2,500 mm during the monsoon, being in the mountain ranges of Western Ghats, the Sahyadris, the months between March and June are months of drudgery and a familiar scene of long trudge for village women and girls to fetch drinking water from a water source. The routine to fetch drinking water could take between two to three hours of an arduous trek that entails climbing a steep mountain.

Successive governments have addressed the problem. About 25 years ago, the government designed and implemented a piped water supply scheme for drinking. The scheme functioned for a few years but lack of maintenance made it dysfunctional. Efforts were made to revive the defunct scheme but all efforts remained either on paper or did not get approval from government departments.

Beginning 2015, the villagers came together and took lead in addressing this long persisting issue. Eleven of those youth staying in the cities contributed Rs 1,000 each as initial contribution to begin work on construction of a well. The site of the well was the dried up bed of the stream. It was agreed to dig deeper on the streambed to catch flowing water and store water after excessive rain.

However, the budget for dredging was close to Rs 5 lakh. It was around this time that the villagers approached Jnana Prabodhini (JP), a non-profit that has been present in the area for over 30 years and undertakes several developmental interventions.

JP decided to facilitate fund-raising only on the condition that the villagers had to be in the forefront of all efforts. The villagers readily agreed. Relevant sums were mobilized from the alumni of JP school and Persistent Foundation, the corporate social responsibility initiative of an IT firm in Pune.

Over three seasons of 2015 to 2017, a well with a depth of 33 ft and diameter of 30 ft was constructed. The representatives of Persistent and the JP alumni came together in March 2017 in a function to inaugurate the well. The occasion was aptly called as Lokarpan Sohala (function to dedicate to the community). It was an occasion to celebrate a new model of CSR engagement.

From passive CSR to active engagement

The Varoti model has demonstrated a different and active kind of qualitative engagement of all the three stakeholders, active in the real sense of the term. Firstly, it is the villagers who have led the activity right from the beginning till the end. Secondly, it is the efforts of the facilitating NGO that insisted right from the beginning that it will play a subordinate role and that it was NOT under pressure to spend money if there was not sufficient support and participation from the community if the issue was not central to them.

Thirdly, the corporate foundation did not see its role merely as a funder. It saw an opportunity in the engagement to educate its employees to be more responsive and participate actively, through the offering of voluntary labor.

For the Varoti village community, it took close to three years of patient waiting till everyone was willing to contribute and saw the benefit of having this activity in their village. For the facilitating NGO, Varoti was one among 15 such projects that were simultaneously happening in the pre-summer months. However, its volunteers made sure that they did not rush the community to agree to something and promised funds because there was a compulsion to spend the funds before March 31 that would have been repeating the same mistakes and lack of ownership.

For the corporate foundation, the actions of the leadership set an example. The employees of the IT firm, both men and women in the age group of 25 to 35 in batches of 15 to 20 offered labor on every Saturday and Sunday during the year. A total of over 120 volunteers travelled to the village during the year. In an encouraging development, employees from another IT company also joined in the labor.

On a typical Saturday, one particular batch would travel to the village in the morning, offered labor hand in hand with the villagers and return to the city in the evening. While the blasting of the well and similar work was done during the work using earthmovers and other machines, the human chain formed by volunteers would then clear the debris on Saturday. Thus the work progressed with speed all over the week.

As a result, during the three years of sustained action, the well-deepening work got completed. Subsequently, the well was dedicated to the village in the presence of some volunteers and the village community. The completed well assured that in the ensuing summer season, women would not have to trek to the far off water source for fetching drinking water.

What does Varoti model mean to employees and blue-collar workers sitting in an air-conditioned offices in metropolitan cities and by nature of the work removed from the stark realities of village life? It offers possible opportunities for employees to connect and may be in the process also start developing empathy towards the plight of citizens who are less privileged.

It was reflected in one of the sharing sessions of the employees. Many of them became aware of the importance of water in their lives, as they almost seem to have assumed and taken it for granted its abundance and availability. The Varoti exposure exposed them to the deficit and some of them resolved to use it with caution and care.

For Varoti villagers, and especially for the women, availability of water near to their place of stay and that too almost round the year is a dream come true. For long, they had waited for someone else to rescue them out of their situation. Having failed to achieve anything significant, the breakthrough in Varoti positively reinforces the often-repeated cliché that self-help is the best help. 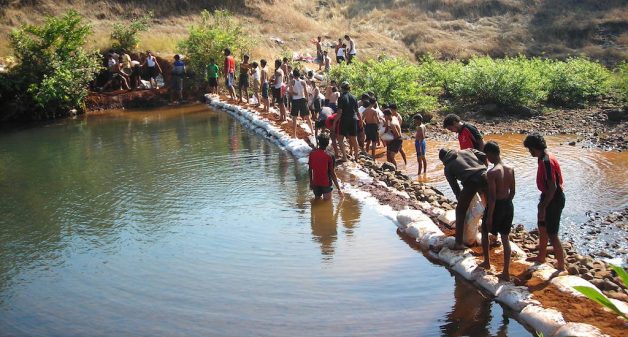 Work progressed speedily at the well near Varoti village. (Photo by Sunil Jorkar)

The effort that goes in these interventions is often relegated to the background. To the credit of the villagers, they did not stay behind in extending their help in terms of offering labor but also ensuring that the documentation of the well that was deepened was fast-tracked with the help of the facilitating NGO in the records of the government.