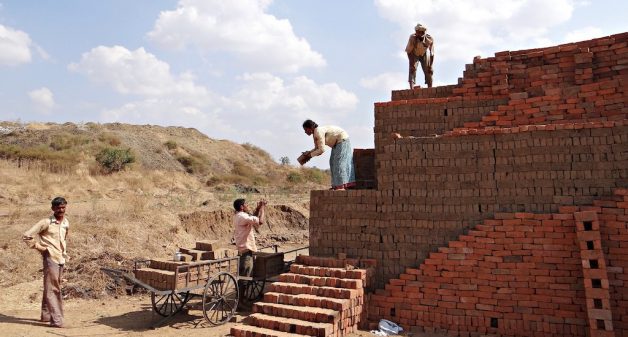 Finding full employment in rural areas is not easy. (Photo by Bishnu Sarangi)

Rural enterprises, particularly those that are not farm-based, are key to creation of local employment and avoiding migration for jobs. Three features of rural enterprises — raw materials, skill or technique applied, and markets — are critical for success that can be sustained.

Common sense suggests that enterprises where all the three are local, familiar or traditional (for example, the local blacksmith repairing the plough of the local farmer), there is really no need for any enterprise promotion effort. On the other hand, where all three are distant, unfamiliar or new, (for example, youth running a medical transcription enterprise in a village in Bastar) the enterprise faces a challenge in surviving and needs a consistent management input. Thus, enterprises that need promotion would have one or two of the three features (raw materials, skills or techniques and market) to be new, distant or unfamiliar.

These rural enterprises can be divided in three classes — the R-R class in which the product or the service is produced as well as consumed in rural area itself; the R-U class that produce stuff in rural areas but cater to an urban demand; and the U-R class that consist of enterprises which import and distribute products and services from urban areas for rural demand.

A village ironsmith repairing agricultural implements in the village belongs to the first class. This class of enterprises has the problem of stagnancy. Producers of craft and household products such as earthen pots selling their produce in the nearby town represent the second class. Shops selling shampoo or mobile recharge kiosks in the villages represent the third category.

It may be a good idea to see the growth and job potential of each of these categories. Enterprises in the third category are derived and driven from the economic activities of actors in urban areas. The growth of employment by them is a function of their expectation of demand from the rural areas.

Prosperity arising out of production of goods and services in rural areas is thus key to growth in jobs in enterprises. Let’s look at a few examples to illustrate the points that follow.

Back in 1984, I studied Shaligram Baghri in Ratlam district. His enterprise was in R-R class. He knew the requirement for farmyard manure of various large farmers and organized aggregation of farmyard manure from neighboring villages and supplied it to them. He was an expert in knowing the specific type of manure the farmer would need. It appears that to get the best results, the manure must match the crop as well as the nature and texture of soil in the farm.

Shaligram knew how would the ideal mix be obtained by mixing manures produced in the homes of various people since he knew the proportion of stall feeding and free grazing and the type of forage on which animals grazed in different villages. He could cater to demand only within the bounds of villages where he was known and he could procure his inputs only from villages he knew.

Another person, a lohar (blacksmith) in the same area continued his parental trade of making implements and repairing them. But soon he innovated and started making frames and wheels for bullock carts and started making other fabricated structures. He developed contacts in the nearby town and started marketing his fabricated gates and other items to the town. He opened a shop in the town.

In a span of a few years he had hired eight persons in various tasks. But he was proposing to slowly shift completely out of the village to the town since that would avoid transport of heavy iron angles. Fabrication operations involved welding, either based on electricity or on gas. Electricity supply in the village was erratic and gas cylinders also had to be fetched from the city.

The first example suggests that for many products arising in rural areas, standardization is difficult due to both variability in conditions at the users’ end as well as in quality parameters of input materials. Hence production of products deemed satisfactory to consumers requires a big play for judgment. Such judgment is difficult to become a transferable skill.

This in turn limits the reach for raw materials as well as customers, and hence scope for growth. And with that it limits the scope for employment in the focal enterprise. We then see a cloning of similar enterprises offering similar products and services in clusters of villages spanning a whole terrain.

The second example suggests that while potentially there is much scope for expansion of the product line and hence business of the enterprise, this is constrained by infrastructure issues of power supply, road connectivity and access. So long as villages suffer from poor infrastructure, there will be a challenge to growth of rural enterprises in the non-farm sector. The two main advantages that a rural non-farm enterprise enjoys are low cost of space for facilities and cheaper labor. But this is soon offset by transaction costs associated with operations due to poor infrastructure.

Thus we need to confront the issues of promoting rural enterprises in the extant environment of infrastructure if we wish to make them engines for growth and employment. We will continue to examine and explore this further.