From an impoverished homemaker to a successful farmer and trusted counselor for many women in the area, the story of Sangita Mhatre of Mande is an inspiring tale of how women in rural India can take charge of their destiny given the slightest of opportunities 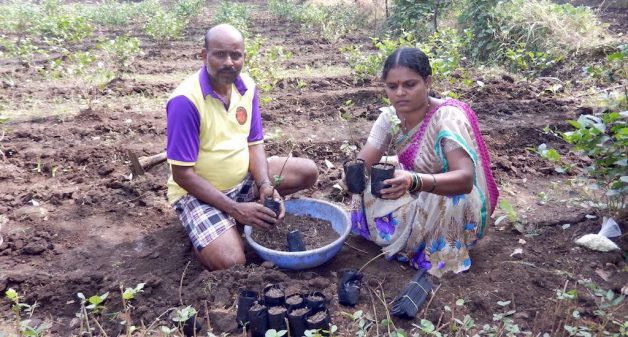 Sangita Mhatre and her husband Shashikant in their jasmine nursery, preparing saplings to be sold to other farmers. (Photo by BAIF)

“We were losing our new chickens fast. To save the remaining 250, we called the local veterinary doctor. Our women could not afford his vaccination fee of three rupees per chick. For the landless women, backyard poultry was the major source of income. I observed the doctor at work. I managed to give the next three vaccinations without charging the women for my work,” recalls Sangita Mhatre, an enterprising woman farmer of Mande village.

Mande village with about 800 residents lies in Palghar district of Maharashtra. In spite of its proximity to Thane and Mumbai, Palghar remains an underdeveloped district. In Mande, 71% of the predominantly tribal population lives below the poverty line.

Sangita’s husband Shashikant Mhatre worked in a factory at Tarapur MIDC (Maharashtra Industrial Development Corporation), some 30 km from his village. With a meager salary and very little income from agriculture, they could not make ends meet. After the factory closed down in 2015, Shashikant had no option but to turn fully to farming for sustenance.

The Mhatres owned less than an acre. One fourth of their land (10 gunthas) had a rocky stratum since it had earlier been loaned to a brick kiln owner and the soil had completely been used for making bricks. Rice cultivated in the rest of the land for household consumption could be stretched for a year. If they had good monsoons, they were able to grow some vegetables. The Mhatre household was a typical case of subsistence farming.

Sangita, a homemaker, helped her husband in the farm, and took care of their two children. As the president of her self-help group (SHG), she had additional responsibilities. The Mande gramsangh (apex body of SHGs in a village) had 68 women from six SHGs. 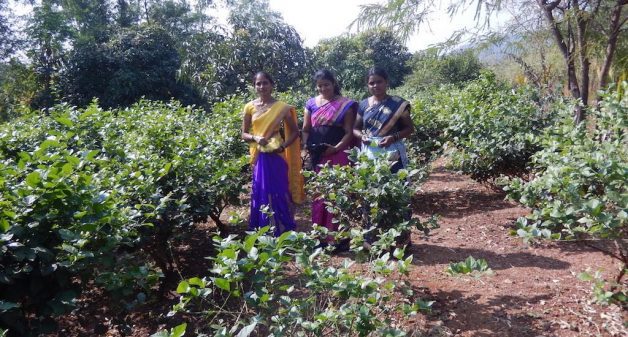 Sangita Mharte guides other women on farming methods for generating a sustained income. (Photo by BAIF)

During a SHG council meeting in 2015, Sangita heard about an income generation project to be implemented in her village. She knew about BAIF Development Research Foundation, one of the partner NGOs, as they had done an earlier project on jasmine cultivation in Mande.

She learnt that they were on the lookout for women to work as Krishi Sakhi (friend of farmers) to provide agricultural inputs to farming communities. Seeing an opportunity to supplement their income, Sangita’s family supported her decision to enroll in the project.

Sangita and the other participants were trained in technical methods to reduce costs and risks associated with agriculture while increasing yield with crop management techniques. The trainees were encouraged to try the new methods in their lands and then to pass on the knowledge. Subsequent trainings helped develop her caliber for leadership and guiding others. After the training, Sangita decided to cultivate rice by System of Rice Intensification (SRI) method in a portion of their land.

“More income with less seeds? We’ve been farming for generations. Never have I heard anything so crazy,” her husband mocked. “I convinced him and planted the seeds in five gunthas. Unlike the 100 kg we used to get with the traditional method, I harvested 250 kg, that too at a much lower expense,” she told VillageSquare.in. “Now for anything related to agriculture, he seeks my advice,” she adds with a laugh.

She motivated the other women to experiment in their own farms and to provide training and consultancy services to other farmers in the village. Persuading the men to attend meetings, listen to her and implement her advice was an uphill battle. But when the farmers observed that she had a better yield than they did, they slowly began accepting her advice. Sangita gained popularity not only in her village, but in nearby villages as well.

In spite of her success in farming and as a krishi sakhi, Sangita decided to quit the project. She knew that the project was only to facilitate the change and was time-bound. Salaries were also often delayed. “I was also unwell and it was difficult to attend trainings and meetings for longer duration. I wanted to work at my own pace,” she tells VillageSquare.in.

Besides paddy cultivation, she practices floriculture and backyard poultry. The 350 jasmine plants in her field assure a steady income of Rs 10,000 per month. The poultry provides her family with a regular supply of eggs; the chickens could be sold in case of immediate financial needs. All the landless women follow her footsteps and grow chickens in their backyards. The nursery for jasmine saplings that she has developed further supplements the family’s income. 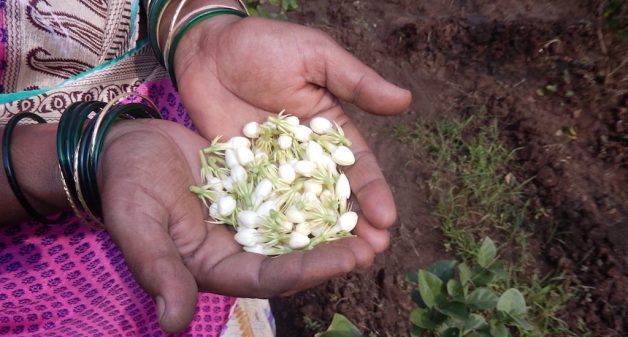 Today, she has reached a stage of self-sufficiency. “I love my work. My biggest achievement was that I first tried everything, gained experience and then advised others,” she told VillageSquare.in while talking about her success. Sangita continues to offer consultancy services free of cost to people from six villages.

Shreeya Bhagwat works with BAIF Development Research Foundation to train Community Resource Persons in the tribal districts of Maharashtra. She has earlier worked in the areas of vocational education and WASH in schools.

This article was written with inputs from the BAIF field team.

Shreeya Bhagwat works with BAIF Development Research Foundation to train Community Resource Persons in the tribal districts of Maharashtra. She has earlier worked in the areas of vocational education and WASH in schools.