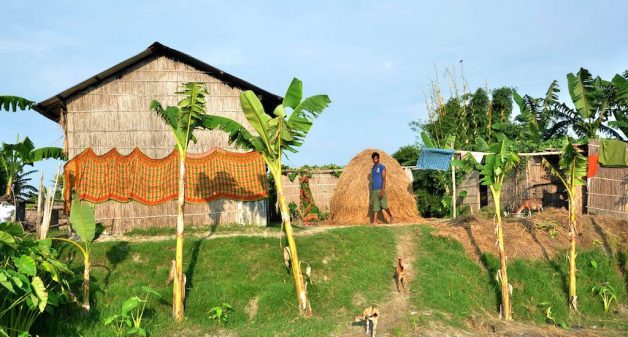 Living on the chars or sandbars on the mighty Brahmaputra and its fast tributaries isn’t easy. But this year was different for some villagers on a small islet called Tapajuli Pathar in Assam’s Barpeta district. For the first time in many years, Amirjan Khatun and her neighbors Tapajuli Pathar have survived the annual flood without their houses being destroyed.

This is despite the fact that this year’s flood in Assam has been particularly severe. In the Barpeta district alone, 26 villages and more than 7,000 people have be badly hurt by the floods till a few days ago.

Floods occur with depressing regularity in Assam. This year has been as disastrous as ever, already claiming 84 lives and affecting more than 1.7 million people. Most often, the first areas to be flooded are the chars, or small river islands, found on the Brahmaputra and its tributaries.

There are over 2000 chars in Assam, with an estimated three million people living on them. With about 68% of the char dwellers living in abject poverty, the floods have a devastating impact on their lives and livelihoods.

The elders in the char villages say that the nature of the floods has changed in the past three decades. Earlier, they could predict the timing and could take precautions. In recent times, they have had to move to government relief camps on higher ground during floods. The tiny camps of about 60 sq. ft are woefully inadequate to house entire villages.

“This year too our area was flooded for a few weeks, but thankfully we could stay at home without being affected,” Amirjan told VillageSquare.in. This near miracle has been made possible for Amirjan and her neighbors because of an innovation called plinth raising, which entails constructing a high earthen platform on which to build a house.

In this method, earth from nearby areas is used to raise the ground level. These platforms are raised to a height of at least three feet above the level of the previous year’s flood. The earth is compacted and grass is immediately planted on the slopes of the platform to hold the soil together. The villagers are encouraged to start vegetable gardens on the platforms and grow banana trees on the slight slope of the platforms to prevent soil erosion.

Most people in Tapajuli Pathar have lost their land to floods and erosion in the last few decades. They have ended up working as daily wage earners in nearby towns or in others’ farmland. “The financially sound families have left the place to buy land in other places,” rues 40-year-old Rahmat Ali, who lost his house and property twice in the last five years. “Some have shifted to stay with their relatives permanently.”

“I have seen enormous suffering of the char dwellers. To arrive at a solution, I even went to Bangladesh to study how they tackled the flood situation,” Abdul Kalam Azad, secretary of Jhai Foundation that initiated the plinth-raising measure under the Char Development Program (CDP), told VillageSquare.in.

Surveys were conducted to get a better understanding of the problems faced by the char villages. The solution of raising the plinth was arrived at after a series of discussions involving dwellers, teachers, government officials, local administrators, experts and academia.

The participants in the program were selected during the meetings, based primarily on their economic status. “CDP is not just about dealing with the floods, but also about bringing a positive change. We ensured that the beneficiaries did not practice child marriage and child labor,” said Zahedul Islam, a development worker. Other factors taken into consideration included whether a family was headed by a woman — a widow in most cases — or whether the family had members with special needs or if they sent their daughters to school.

Based on these criteria, 50 families were selected from the badly affected Mazidbhita, No 4 Bhera and Balikuri chars, besides Tapajuli Pathar on Beki River, one of the major tributaries of Brahmaputra.

The project began in 2016. Jhai Foundation spent some Rs 4.5 lakh to raise the plinths of 50 houses at an average of Rs 9,000 each. The families contributed labor.

“The plinth-raising has changed our lives,” says 33-year-old Amirjan. “Last year we had to take refuge in others’ houses. This year we have our own home. Four of our children are going to school. My husband has been able to go to Kerala for work, since he doesn’t have to worry about us during the floods.”

“Earlier we had to move to a relief camp. I couldn’t grow any vegetables; all would perish in the flood. But this time, I grew them on the plinth. Most importantly, my pregnant daughter-in-law didn’t have to suffer sanitation and health problems during the flood,” Rong Bahar, a 65-year-old widow, told VillageSquare.in.

“This plinth-raising has made the char dwellers aware of the corrupt practices in government works,” says Kalam. “The villagers estimate that the same earth-filling work under a government scheme would have cost Rs 15 to 20 lakh because of corruption at various levels.”

The schools in these areas were always closed during the floods. The village kids have now special floating classes aboard a boat stationed at Tapajuli Pathar. Every day Jahidul Baig teaches 45 kids of different ages. “We are lucky not to miss classes this year during the flood,” said Anjuwara, a class IV student. 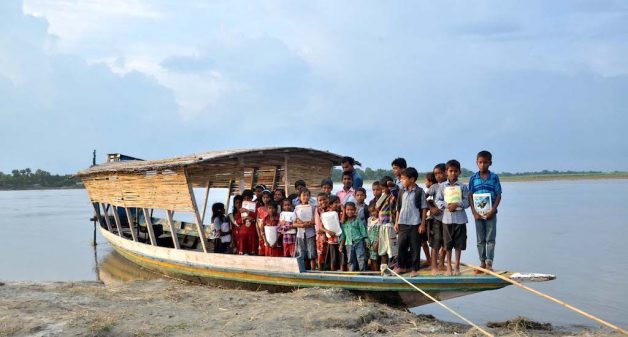 The floating school on a boat has helped children living on river islands not miss classes during the floods. (Photo by Abdul Gani)

Though the floodwaters have receded and schools have reopened, the classes on the boat continue. “We started it in this locality six months back to help the students, besides their regular classes. And it proved to be a great help during the flood as the schools were closed for more than a month,” Jahidul Baig, the teacher, told VillageSquare.in.

The Char Development Program will now be extended to other char villages. The community mobilization for raising the plinths of houses has inspired an equal number of economically capable families to raise the plinths of their houses on their own.