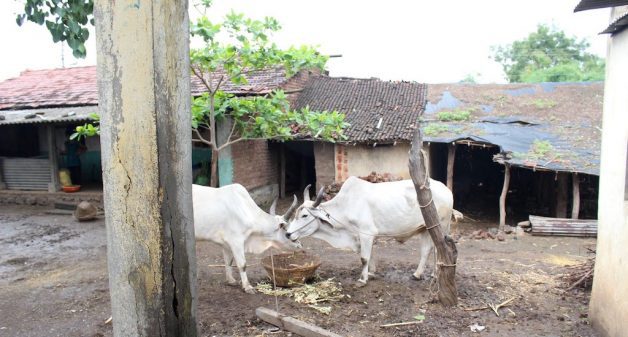 Pastureland is shrinking in the country and feeding within premises is gaining prominence. (Photo by Saif Noor)

The milk that we drink everyday does not appear from thin air. A dedicated amount of feed and fodder is needed for the cattle to survive and to produce milk. Providing the right quantity of feed is a matter of concern for every cattle owner.

India is facing acute shortage of feed and fodder and its negative influence on the dairy economy is being discussed widely. If the deficit in quality fodder continues and if no efforts are directed at bridging this demand-supply gap, India may have to import milk by 2021, according to studies.

The major challenges faced by the feed and fodder production industry are the fixed area under fodder production and decline in pasturelands. Another factor is the replacement of coarse cereal crops, one of the main sources of crop residues, by commercial crops.

Area under fodder production has remained static for the past four decades — around 4% of the Net Sown Area (NSA) — and common property land resources are declining annually, at the rate of 19 hectare per 1000.

An exploration in the Marathwada region of Maharashtra shows the extent to which a natural adverse phenomenon such as drought can worsen the fodder situation. Kisan Bapad, a small farmer from Nashik’s Lonarwadi village, requires 100 kg of green feed and 35 kg of dry fodder to feed his herd of five milch cattle, two draught cattle and four young stock on a daily basis. While he gets dry fodder from his own fields, he has to buy the entire green feed from other farms.

“Sourcing fodder is both a capital and a time-intensive job. Entire Marathwada has been witnessing weak monsoons in recent years, which has further compounded the acute scarcity of feed and fodder in the region,” Bapad told VillageSquare.in on the year-round availability of fodder.

Earlier when the monsoons were good, the farmers had to procure green fodder for only eight months because common grazing land of the village took care of the fodder requirements for the rest of the year. Bapad expressed concern over the shrinking pastures in his village, just as in other villages. Nonetheless, Lonarwadi village wasn’t as severely affected from drought as Dindori taluk, about 50 km from Lonarwadi, due to watershed improvement.

“Consecutive dry spells have not only destroyed our farm output but also affected the livestock badly due to chronic shortage of fodder and water,” Babaji Ngalu, a small farmer from Dindori, told VillageSquare.in. Non-availability of fodder and water forced Ngalu to reduce his cattle herd by selling off a pair of bullocks and some youngstock at less than half the price.

His milch cows survived the drought with the help of private fodder camps set up in the neighborhood. He also attributed the low price realization of bullocks to the new anti-cattle slaughter legislation enacted by the Maharashtra government, which has caused steep crash in prices, compounding the concerns of cattle owners.

According to feed computations of National Institute of Animal Nutrition and Physiology (NIANP) in 2013, 575 million MT of dry matter (DM) is generated every year from all the three resources. On an average, a cattle weighing 350 kg requires around 7.5 kg of DM every day for subsistence, without taking the nutritional need for enhanced yield into consideration. 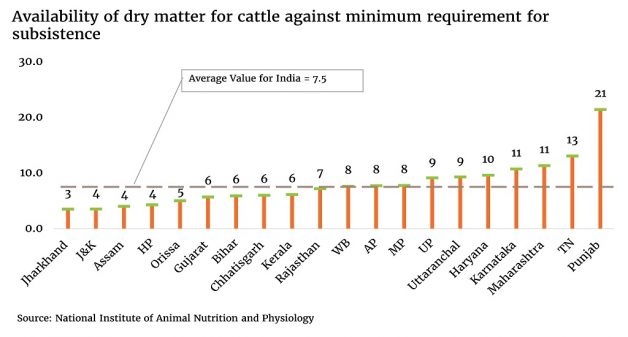 According to Livestock Census 2012, there are 205 million Adult Cattle Units (ACUs) in the country, estimated by standardizing different livestock species such as cattle, buffalo, goat and sheep into a standard unit based on their weight. 560 million MT of DM is required for their subsistence.

The numbers indicate that resources are sufficient to feed the livestock population of the country. However, with dairy farming emerging as a livelihood in the last few decades and lactating animals getting feed preference, a significant percentage of cattle including bulls and old cattle are likely to starve.

A majority of Indian states have the bare minimum or insufficient feeding resources for their cattle, as can be seen from the chart. Wide inter-state gaps are also clearly visible as average availability of DM in all the eastern states is below the threshold value.

With rising passions overshadowing rationality, reinforced with newer laws in many states, cattle protectionism has gained pace. An implication of such cattle protection movement would be an increase in cattle population in the coming years. This leads us to the question: “Will we have enough feed resources for the future livestock population?”

Future estimation of DM availability is based on a study by the Indian Council of Agricultural Research and the International Food Policy Research Institute that estimated the crop production in 2030 in India. 612 million MT of DM is estimated to be available as crop residues and concentrates in 2030. Projecting green fodder availability was difficult because of lack of data and future estimates of area under fodder crops, forest areas and grazing land. 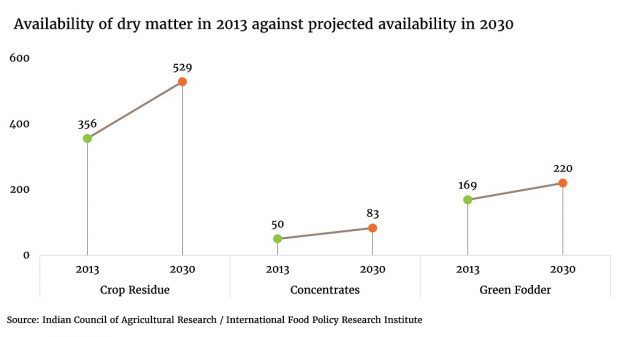 According to National Institute of Animal Nutrition and Physiology, between 1980 and 2011, DM availability from green fodder saw 15% growth, whereas DM availability from crop residues and concentrates doubled and tripled respectively. If we assume that area under fodder crops will increase from 4% to 5% of gross cropped area, with no decline in the area under pastures and forest, DM availability from green fodder will be 220 million MT in 2030. Thus we arrive at an estimate of about 832 million MT of DM from all the three resources, which will be enough to carry a livestock population of 300 million ACUs.

However, ongoing cattle protection movement can change the equations by accelerating the growth rate of ACUs. In a situation of absolute ban on cattle slaughter in the country, number of ACUs will swell to 340 million. With a fodder stock to carry only 300 million ACUs, this surplus population of 40 million ACUs would be either fed by importing fodder or left to starve.

Rapid explosion in cattle population could be a double whammy to the livestock economy, which is already grappling with acute fodder crisis. It would significantly dampen the growth of milk and meat industry.

With more focus on enhancing livestock productivity, inequity in fodder distribution may increase in future, leading to a larger population of starving livestock. Committed to implementing absolute ban on cattle slaughter, the government should increase fodder production and restore grasslands to ensure sufficient feed for future surplus cattle, which would be gau seva or cattle protection in the true sense.