Even as Madhya Pradesh reels under severe drought, residents of a tribal village who were denied access to water have collectively restored farm ponds to harvest the meager rainfall to fulfill their water needs 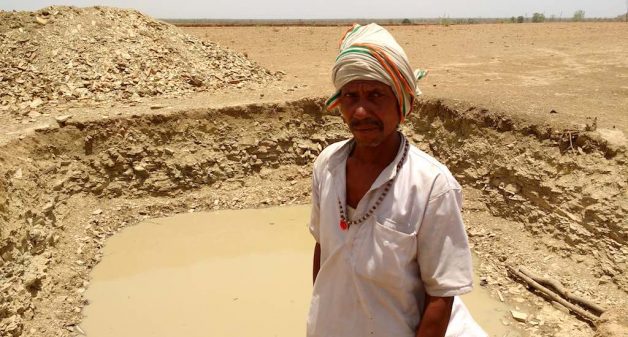 Pooran Adivasi near his farm pond with some water, even as the rest of the landscape wears a parched look. (Photo by Nachiket Sule)

The landscape of Shivpuri district in Madhya Pradesh is a clear indicator of how arid the region is. With below-average rainfall in successive years, Shivpuri has been in the list of drought-hit districts for quite a few years. Even under such dire drought conditions, the residents of Kalothra village have managed to conserve water through community efforts.

Pooran Adivasi, a Sahariya tribal living in Kalothra village in Shivpuri district, was happy that his farm pond had some water in spite of the scorching heat of May. He is contemplating two crops this year. Growing two crops a year may be routine norm in other parts of the country, but an achievement for a Sahariya tribesman in a drought-hit area where only rain–fed agriculture is practiced.

Shivpuri district in Madhya Pradesh was declared drought-affected in 2015. The extent of drought has worsened so much in the past one year that even Shivpuri city, the district headquarters, went without piped water supply for eight straight days last year.

However, the residents of Kalothra village in the same drought-hit Shivpuri district have tackled the situation on their own. In the peak of summer, even when the temperature soared beyond 45o C, the village had water, thanks to community efforts.

Sahariya tribes form the majority of Kalothra’s population. The Sahariyas have been classified as a Particularly Vulnerable Tribal Group (PVTG) by the Government of India, indicating that they are more underprivileged than the Scheduled Tribes (ST) and are at the lowest rung of the caste hierarchy. They have been classified as PVTG because of their low development index, a stagnant or declining population, extremely low literacy and a subsistence level of economy.

The Sahariyas inhabit the northern parts of Madhya Pradesh and Rajasthan. Traditionally Sahariyas were forest dwellers. They did not practice settled farming, but depended largely on forest produce such as resin, mahua flowers, tendupatta leaves, etc. for their livelihood. Over the years, most of the Sahariyas have been evicted from their habitations in the forests and wildlife sanctuaries and have been settled in various villages.

With no assets and no farming skills, and being deprived of access to forest produce, they have been forced to become wage laborers, mostly in nearby stone mines. Working in the stone mines has had an adverse impact on their health. Various studies have indicated high prevalence of tuberculosis and malnutrition among the Sahariyas.

The government has introduced development schemes targeting the Sahariyas. Despite the state government spending millions of rupees, the welfare measures have not reached the intended beneficiaries and the Sahariyas’ conditions have not changed much. Their fight against illiteracy, ill health, malnutrition and access to resources is far from over.

Though residents of most of the villages in Shivpuri district lack access to water, Sahariyas face the worst brunt of the scarcity because of their low social status.

Shivpuri district, which has the largest population of Sahariyas, has faced droughts many times in the past. It has always been extremely difficult for the Sahariyas to access drinking water during droughts. In many of the villages, upper caste Hindus give them water, but in return, force the tribal people to do manual labor work in their farms.

Arjun Adivasi of Mudkheda, employed with Parhit Samaj Seva Sanstha, a local NGO, rues that the community did not make collective efforts to fight the situation.

In Mudkheda, a village near Kalothra, there are around 180 Sahariya households and only two upper caste households. The upper caste Hindu households have a hand pump each. However, even during intense drought, the two families refused to share water with the tribal households.

After repeated representations to the district administration, the collector intervened. This intervention did not lead to a permanent solution. The collector’s order was followed but for a few days.

Having no other alternative, the villagers dug up a makeshift well by themselves in the bed of a dry stream and struck water.

There is no proper road leading to Umari Kakra, a village in the neighboring Pohari block. The villagers fetch water from a river which is almost 6 km downhill from the village. Carrying pots of water and trekking uphill to their village is an extremely laborious task for the women of Umari Kakra.

In many other villages also, Sahariyas walk long distances to fetch water from whatever public source they can access. Water scarcity compounds the poor livelihood conditions, forcing many Sahariyas to migrate to far-off places.

Given this scenario, the story of Kalothra, is truly inspiring. Kalothra is a small village of about 1000 people, 80% of them being Sahariyas.

The villagers came together to address the water problems that they faced. After the traditional sources dried up, the Kalothra villagers had to depend on the upper caste Hindus who gave water conditionally. 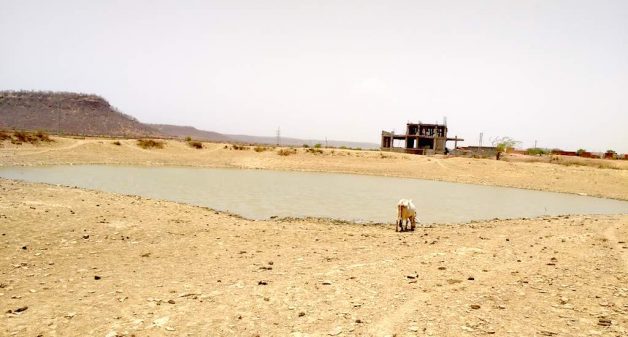 Deepened farm pond filled during the rains serves as an exclusive watering hole for the livestock. (Photo by Nachiket Sule)

One of the Sahariyas had deepened a farm pond last year. Although, Shivpuri received below-average rainfall, it was enough to fill the farm pond. The villagers decided to use the water from this farm pond for drinking and household purposes. They deepened another pond that would provide water for their cattle. They decided not to use the water from either of the ponds for agriculture. This initiative helped them overcome the dire water scarcity.

Manoj Bhaderiya of Parhit Samaj Seva Sanstha added that Kalothra’s SHG (self-help group)members got fish seedlings from the district administration and grew fish in the farm pond reserved for cattle.

Encouraged by the success, other villagers have started to dig or deepen the ponds in their own farms to meet drinking water needs and sustain agricultural activities. Pooran Adivasi, who dug a pond in his farm , said that if he had received MNREGA (Mahatma Gandhi Rural Employment Guarantee Act) funds for digging the pond, it would have boosted his effort.

The success of Kalothra village was possible because of collective efforts of the community, continuous support from NGOs and leveraging government schemes wherever possible.

The initiatives undertaken by the Sahariyas in Kalothra are quite relevant to other vulnerable communities and the Sahariyas spread across Madhya Pradesh and Rajasthan. Their upliftment requires sustained efforts in livelihoods, health and education.

Nachiket Sule is a researcher at Pune-based Centre of Development Research. He holds a graduate degree in homeopathic medicine and a postgraduate degree in public health from the Tata Institute of Social Sciences.

Nachiket Sule is a researcher at Pune-based Centre of Development Research. He holds a graduate degree in homeopathic medicine and a postgraduate degree in public health from the Tata Institute of Social Sciences.