Recognizing the significance of traditional crop varieties that can withstand climate-related vagaries and offer nutrition security, tribal farmers have started to conserve and propagate local cultivars 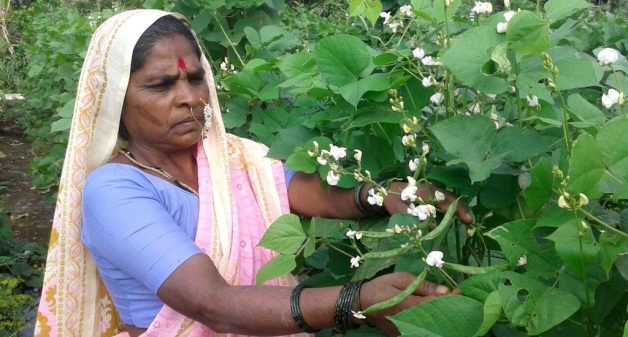 Rahibai in her farm of landrace hyacinth bean that she has helped conserve among other traditional crop varieties. (Photo by BAIF)

Rahibai Soma Popere of Kombhalne village in Ahmednagar district of Maharashtra is highly knowledgeable about agro-biodiversity, conservation of landraces, innovative techniques in paddy cultivation and the like. Her insight is based on experience, and hence when, she speaks in her earthy Mahadeo Koli tribal dialect, even experts listen intently.

The 54-year-old farmer has the distinction of conserving and multiplying 48 indigenous landraces of 17 different crops including paddy, hyacinth bean, millets, pulses and oil seeds.

“The tribal households traditionally had a backyard garden that had multiple, multilayered and multipurpose indigenous trees, plants, herbs, and shrubs. The produce from this small garden was sufficient to meet the dietary and nutrition needs of a family for an entire year,” Sanjay Patil of BAIF Development Research Foundation, a Pune-based NGO working among tribes in 16 states of India, told VillageSquare.in.

The tribes of Palghar district traditionally cultivated over 300 rice varieties, each consumed for a specific intent such as for instant energy when exhausted and for medicinal properties. These native varieties were the result of years of dedicated efforts to develop and conserve crops suitable for the local agro-climatic conditions. 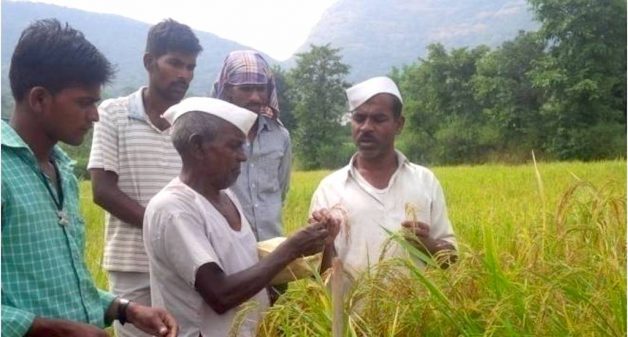 Farmers are involved in participatory selection of rice. (Photo by BAIF)

Unfortunately, these high-yielding varieties failed to give any spectacular increase in yield as the resource-poor tribal farmers were unable to afford the recommended inputs like chemical fertilizers and pesticides.

After cultivating for many years, the farmers realized the limitation of hybrid seeds as the seeds lost vitality after a generation or two. Moreover, they found that the dwarf varieties introduced for higher productivity resulted in lesser hay and hence shortage of fodder for the livestock, an integral part of the farming system.

This awareness has resulted in the tribal farmers reverting to native seeds and organic methods of cultivation, thus reducing their dependency on external inputs, namely, seeds, growth promoters, fertilizers, and pesticides.

To help the farmers revert to native crops, Rahibai prepared 5,000 seedlings of hyacinth beans and shared them with members of self-help groups in 25 villages. 89 acres were farmed with these seedlings.

She played a key role in forming the Kalsubai Parisar Biyanee Savardhan Samiti in Akole in Ahmednagar district, towards conservation and propagation of traditional varieties. Indigenous seed melas or fairs were organized in different parts of the district to create awareness among farmers about the diversity of seeds and the need to conserve them.

Known for the famed Warli art, Jawhar in Maharashtra’s Palghar district is home to the Warli, Thakar, Katkari and Kokna tribal communities. In Jawhar taluk, an effort similar to Rahibai’s in conserving traditional varieties of paddy was initiated by Sunil Kamadi of Kamadipada village and Mavanji Pawar of Chouk village.

While harvesting his paddy crop in 2010, Kamadi observed an unusual panicle of paddy that had more number of grains compared to the others. Isolating the panicle from the rest, he sowed its seeds separately for four successive seasons. With BAIF’s assistance he successfully developed a new selection of this rice variety with specific traits.

An active member of a seed saver farmers’ group, Kamadi helps fellow farmers in conserving crop diversity in the locality and is considered an expert in participatory seed selection in crops such as paddy, finger millet and proso millet. Over the years he has collected scores of local varieties of tubers such as karande, kochi, suran and vegetables such as bottle gourd, bitter gourd, ash gourd, brinjal, pumpkin, cowpea, colocasia, lablab beans and gherkin.

Kamadi and Pawar are recipients of the Plant Genome Saviour Farmer Recognition Award for 2011-12, conferred by the Ministry of Agriculture. Kamadi got the award for his paddy variety called Ashwini, developed through selection method and Pawar for his three paddy varieties, namely Kamal, Kirti and Sadhana.

Rahibai, Kamadi and Pawar are associated with BAIF in their participatory seed production, with the active involvement of the local farming community.

Through seed exhibitions and personal interactions with growers, the BAIF team has collected data on the likely reasons behind the extinction of varieties, existing crop landraces and their specific properties, besides factors affecting crop diversity.

Data indicate that Dhadgaon in Nandurbar district and Jawhar have a number of landraces of food crops that are resistant to pests, grow on poor soils, flourish under changed climatic conditions and offer high nutritive value.

Revival of landraces is facilitated through community seed banks. The farmers who are assigned the task of producing seeds are offered choice samples collected after four or five generations of purification and upgradation. The seeds, sold at a price decided by the seed saver group, offer a new avenue of income. If a farmer is unable to pay for the seeds in cash, he is offered the seeds with a condition that he return double the quantity of seeds that he took.

Presently, 15 villages in Gadchiroli, 12 in Nandurbar, 10 each in Palghar and Ahmednagar, and five in Pune are involved in producing seeds and in operating community seed banks towards preserving traditional crop varieties.