Migrant workers, who contribute significantly to infrastructure development in the developed mountain state, need to be provided with better working and living conditions through friendly government policies 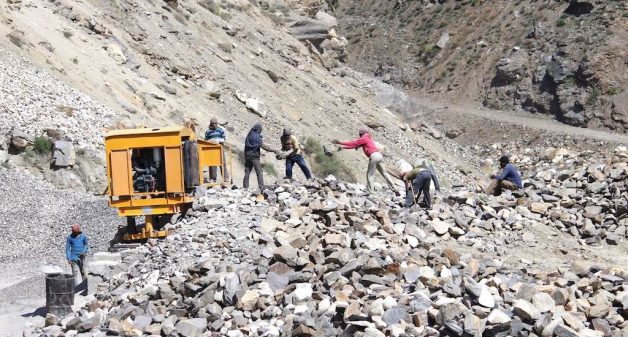 Migrant workers in the mountains of Himachal Pradesh face a high risk from landslides and rock falls. (Photo by Abhijit Mohanty)

“In my village, I can’t feed my family because there’s no work. So I came to Himachal Pradesh. It was painful to leave my wife and children,” said Harish Thapa, who hails from Rukum village of Nepal and works in Rekong Peo, the district headquarters of Kinnaur district in Himachal Pradesh. “I will earn here and repay loans I took from relatives,” Harish told VillageSquare.in.

Harish is one of thousands of workers from Nepal, besides from Indian states of Jharkhand and Bihar, working in Himachal Pradesh — one of the most developed states in the country. They bear hardships with the hope of a better tomorrow, but without success, given the lack of government and employer apathy.

Across the Himalayan regions of northern India, Nepali migrants build and maintain mountain highways. For the Nepalese, migrating to India does not involve expensive air travel, passports and visas. There is no official restriction for Nepalese to work in India. The flip side is there is no official body to ensure their well-being. The same can be said for people from Jharkhand and Bihar.

“Rural Jharkhand and Bihar are characterized by unequal land distribution, gross underemployment and lack of livelihood opportunities. Hence, the rate of out-migration is very high,” said Gladson Dungdung, a Ranchi-based development activist and author of a book on indigenous people.

The working and living conditions of migrants in Himachal Pradesh are appalling. They execute backbreaking road construction work with minimal safety gear, facing risk from rock falls and landslides.

Employers often do not honor contracts and do not pay workers for the first few months. When they pay, it is often less than the contracted amount.

“We have to work from 8.30 am to 6.00 pm. We work like slaves, bearing with the heat and freezing cold,” Sadhav Ekka from Bihar, living in Rekong Peo’s Shongton camp, told VillageSquare.in. “There is no drinking water at the worksite, no shade for resting and not even a first-aid kit,” lamented Mohan Lakra from Jharkhand. 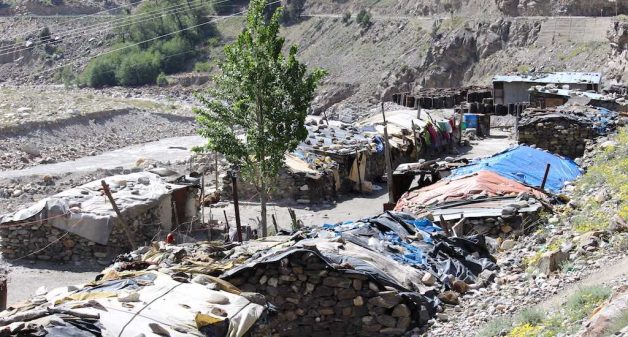 The shanties where the workers live are often cramped, lacking ventilation. Migrant workers are not entitled to medical and other benefits in case of work-related accidents and death. A recent study by the International Labor Organization (ILO) shows that 165 out of every 1,000 workers are injured at work, world’s highest among construction workers.

Without address proof, they are unable to open bank accounts. “Last year Rs 1,200 was stolen from me because I couldn’t save in a bank,” Ekka told VillageSquare.in. Without access to the Public Distribution System (PDS), these migrant workers buy food grains and kerosene at higher prices.

Exposed to dust and asphalt fumes without protection, they suffer from various health issues. “They earn more here,” Akash Yadav, a Rekong Peo-based development professional told VillageSquare.in. “But with minimal wages and frequent hospital visits because of their working conditions, working in their village would imply better health.”

“Being away from family and societal support structures, and exclusion from state benefits has a psychological effect,” said Manoj Kumar of Vikas Sahyog Kendra, an NGO in Jharkhand.

Lack of proper water supply and poor sanitation facilities lead to various ailments, the most common being tuberculosis, malaria and dermatological and respiratory problems.

Among the workers, the women are more vulnerable. They are paid less than the men. India is a signatory of the Convention on the Elimination of All Forms of Discrimination against Women (CEDAW). However CEDAW general recommendation number 26 on Women Migrant Workers (2008), which includes protection against gender-based discrimination, is hardly implemented.

“There’s no rehabilitation support or compensation by the employer or the government to the woman in case of injury or loss of her husband,” said Yadav.

Lack of toilets at work place and stringent work conditions lead to various health issues, but because of the social stigma, the women suffer in silence. The fluctuating number of migrants also makes it difficult to provide sanitation facilities, though the Virbhadra Singh-led Congress government aims to make Himachal Pradesh an open-defecation-free state by 2019. 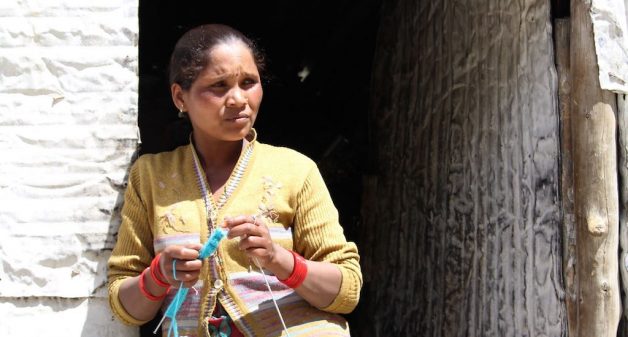 Neerja Ho from Jharkhand, seen knitting a sweater for her 4-year-old daughter, faces more problems as a woman. (Photo by Abhijit Mohanty)

Women do not have facilities like maternity leave or breast-feeding breaks at worksite. “We are often called chalta gadi (running vehicles), as we carry everything on our back. At worksite, we suffer eve teasing. Men try to lure us with money,” Neerja Ho from Jorag village in Jharkhand told VillageSquare.in. According to Ram Ho, her husband, men do not leave their wives behind for lack of earning opportunities.

“Migration is a matter of survival and has trans-generational effect. Women who had migrated in their youth find it hard to cope when their children migrate. Widows are vulnerable facing food insecurity, and age-related health problems,” said Amit Kumar, a journalist based in Rekong Peo.

Exploitation of single women is common, according to Srinibash Das of SOVA (South Orissa Voluntary Action), an NGO in Koraput, Odisha.

“There’s no fence around our makeshift house at the Akpa Bridge camp. Sometimes strangers peep in at night. We always feel unsafe,” said Vaisali Pode from Rupse village of Nepal.

Whether they migrate with their parents or stay back in the village, children are exposed to hardships and are deprived of education. In many cases they end up as child laborers.

“The Inter-state Migrant Workmen Act 1979 is hardly implemented in its true spirit. Migrants are also unwelcome in the cities, despite the growing demand for them in the labor market,” says J. John, Secretary of the Centre for Education and Communication, a Delhi-based labor research center. The Act lists the responsibilities of employers including the rights of workers like wages equal to that of local employees.

As per the Act, each worker is entitled to healthcare assistance of Rs 25,000, an equal amount on retirement after working in the state for a specific period. The worker is also entitled to Rs 3,000 for children’s education; Rs 50,000 in the event of death in accident and Rs 10,000 in case of natural death, besides Rs 15,000 for transporting the deceased to the native village. The Act also gives the right to raise industrial disputes in the provincial jurisdiction where they work or in their home province.

“The Act comes into picture only if the laborers are recruited through an agency and registered at the source or the destination district. As per the law, any establishment engaging five or more inter-state workers should get them registered by the district labor office. If they aren’t registered at either place, it’s a violation of the Act,” Umi Daniel, Regional Head, Migration, Aide et Action, India, told VillageSquare.in.

According to central government guidelines, migrant children, adolescents and pregnant and lactating women can benefit from the ICDS (Integrated Child Development Services) centers. But, that’s not the reality.

In spite of outreach services by National AIDS Control Program, awareness is less and HIV / AIDS infection is rampant. “The AIDS menace is grave since migrant workers will pass it onto their families,” said Manoj Kumar.

Since 2011, the annual inter-state migration is about nine million, according to government’s Economic Survey 2016-17. “We must ensure the welfare of inter-state migrant workers without whose meaningful presence the local economy would crumble,” said K.K. George, Chairman of Kochi-based Centre for Socio-economic and Environmental Studies.

“Every district should have a grievance center to address our problems. Without residential proof, we are deprived of many entitlements. Our children are not even allowed to eat at anganwadi centers,” Lakra told VillageSquare.in.

“What we witness is exploitation of migrants desperate for work. Bilateral agreements for monitoring and complaint procedures for workers remain underused. Workers deserve the protection provided by ILO’s labor standards,” said Coen Kompier, a specialist on international labor standards at ILO, India.

“The government should issue identity cards to migrants. It will help them access welfare measures including PDS and to open bank accounts. Besides water and sanitation, proper housing is a must. There is a need for registration of workers on a national platform,” said Dungdung.

There is a pressing need to develop an enabling policy to help migrants access their basic rights on education, healthcare, sanitation, and social security.

Abhijit Mohanty is a Delhi-based development professional. He has worked with indigenous communities in India and Cameroon on issues related to land, forest and water.