Faced with severe water shortage due to reduced snowfall and receding glaciers, a Ladakh village has built an artificial glacier successfully through community efforts that now fulfills all its water needs 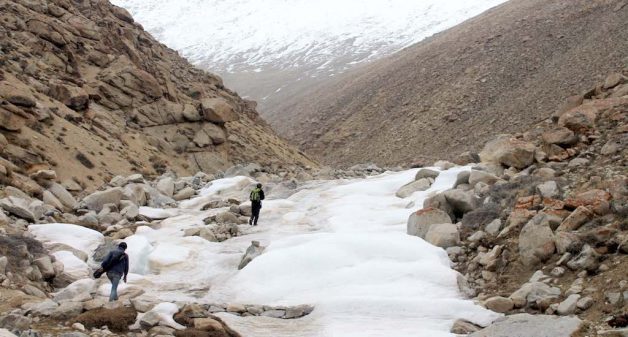 The artificial glacier melts and flows towards Nang village in May, fulfilling the village’s water needs. (Photo by Samten Choephel)

Samstan Zangpo was troubled about his wilting saplings. The 56-year-old farmer from Nang village in Leh district has been planting willow trees for a few years to supplement his farm income to feed his joint family of 14 members. The family grows potato, barley, peas and vegetables, besides rearing some livestock. The newly planted saplings started wilting due to lack of water.

Ladakh is a cold and arid region where the annual rainfall is 100mm. Glacier melt water has been the only source of irrigation for 80% of farmers in Ladakh. Only 20% of them farm by the banks of Indus River and use the river water for irrigation. The region used to receive snowfall twice as much as it receives now. However, in recent times, the snowfall has decreased and is untimely, indicating the impact of climate change.

Lower snowfall in the past 35 years has resulted in receding glaciers and insufficient water in the streams, leading to water scarcity in the villages. Nang is one of the villages plagued by severe water shortage.

Due to last year’s water scarcity, the number of irrigations in Nang was almost halved, resulting in low yield of crops. The potato yield from Zangpo’s farm was only 5,000 kg last year, as against the usual 7,500 kg. This resulted in a loss of over Rs 30,000, as potato is his main cash crop. When they receive sufficient rain, he produces 1,000 kg of barley, but last year the yield was a mere 200 kg. He lost Rs 24,000 from barley.

For a Ladakhi farmer with an average landholding of 10 kanal (1.25 acre), such a loss is huge. But Zangpo is not alone in this struggle. The entire village faces the same crisis as a consequence of depleting water resources.

Artificial glacier to the rescue

Nang village in the Ladakh region of Jammu and Kashmir is about 30km from Leh town at an altitude of 3780m above mean sea level. The village has 74 households and a population of 334 as per 2011 census. Agriculture is the villagers’ means of livelihood, potato, barley and peas being the main crops.

Nang has no permanent glacier. The perennial stream and natural springs that supply water for drinking and irrigation fall short of fulfilling the need of all the farmers. Summers are short and hence only a single crop can be grown in a year.

The seeds need to be sown in the month of April and May for crops to mature fully. However, sowing and irrigation are determined by the flow in the main stream. To apportion the water, families take turn to irrigate their fields. Water distribution is governed by traditional village institutions known as chures and churpon.

To overcome the water shortage, the villagers decided to build an artificial glacier in the higher reaches of the village with the support of Leh Nutrition Project (LNP), a local NGO, and Tata Trusts. “The purpose of artificial glacier is to conserve every drop of winter water — which otherwise goes waste — and use it at the crucial spring time. Since it is at a lower altitude, it starts to melt earlier than a natural glacier, that is, in the month of April and May, and supplements the existing water for crop sowing,” Tsering Tundup, LNP’s project coordinator, told VillageSquare.in.

What are artificial glaciers

An artificial glacier is a simple, cost-effective and unique technique for harnessing and conserving water in the cold and high altitude་ regions. It was first conceived and implemented by Chewang Norphel, a retired civil engineer working with LNP.

The artificial glacier is built at a higher elevation — generally at more than 4300m above MSL — but at a walking distance from the village it is proposed to serve. Stone embankments built at regular intervals impede the flow of water, forming shallow pools. The pools start freezing in late November. Ice accumulates on the mountain slope for four months, forming artificial glaciers. The size of the glacier depends on the temperature, topography and velocity of water in the stream. 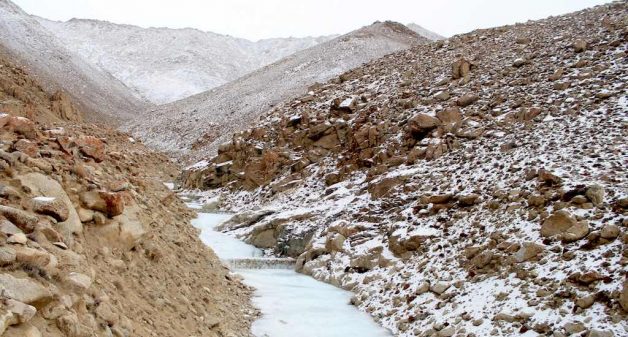 Water blocked by an embankment begins to freeze in December, forming an artificial glacier. (Photo by Samten Choephel)

Construction of artificial glaciers with community participation seemed the most viable option since the farmers needed a realistic solution to their water problem. The community was involved in the entire process — selection of glacier site, feasibility studies, collection of construction materials and the actual construction process.

The villagers decided to depute one person from each household to carry out the civil work. They camped at the site for two weeks, since returning home meant a three-hour grueling walk. With the site at 4,300m above MSL and the village at 3,780m above MSL they felt it prudent to setup up temporary shelters in their now-defunct nomadic huts till the work was completed.

Forty dry masonry wall embankments, of a total length of 1,375 feet, were constructed. Upon commissioning, the technology was handed over to the head of the village, locally known as goba or nambardar. A user group has been formed to look after the maintenance of the structures.

Occasional flooding or overflow in the stream may damage the embankments. In order to sustain the infrastructure, the villagers decided to keep a revolving fund with the village council for repair and maintenance. They indicate that they may undertake minor repair work through the Mahatma Gandhi National Rural Employment Guarantee Act (MGNREGA) scheme, which ensures 100 days of work to all poor rural households.

The benefits of the artificial glaciers are most evident during the sowing season. Zangpo’s waiting period to get his share of water has come down from a month to 20 days because of the glaciers. According to the village chief, the entire community is satisfied with the results. “They feel that their hard work has paid off. The crops have grown better this year. We expect better yields,” he told VillageSquare.in.

“When we are assured of water supply, everything is possible. I plan to plant more trees. I am positive that my crop yield will increase this year and I would get a better income. I am a happy farmer because we have artificial glaciers in the village for our irrigation needs,” Zangpo said.

According to Chewang Norphel, fondly called as Ice Man, out of the 113 villages in Leh district, 32 villages face water scarcity. Artificial glaciers offer the best solution in the mountain region and can be replicated in the villages that face water shortage.