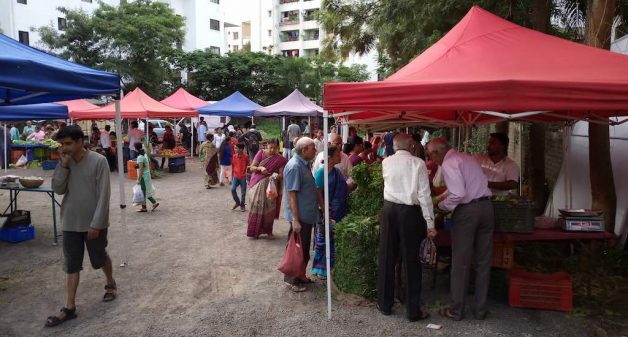 People find it convenient to buy vegetables at the weekly farmers’ markets in Pune. (Photo by Ajit Kanitkar)

Some experts even go a step further in arguing that farmers should actually time their produce and produce what the market wants. They propagate dreams such as from farm to the fork or plough to plate. While these are important macro-economic discussions, a small experiment is underway in Pune for the past one year. These are weekly farmers’ markets that are now catching the attention of the current and aspiring political class too, besides getting increased patronage from both farmers and urban consumers.

To a rural citizen, this urban phenomenon of a weekly market might not sound interesting at all. There are thousands of weekly markets, popularly known as rural haats, which are organized in each and every corner of the country. A weekly haat offers time and space to hundreds of small and marginal farmers and other small and micro-enterprises to market their agricultural produce week after week. The place and time is pre-determined. Some of the hawkers move from one day to another day to market their produce. The same concept seems to be catching up in cities such as Pune.

For urban consumers, the weekly farmers’ markets are one more source for procuring their daily stock of vegetables. This is not to say that this is not useful. If one looks at the growing urban market in cities like Pune, a recent phenomenon that is happening is that many of the traditional grocery stores have slowly expanded their physical space and also their service offerings. So typically, a grocery shop such as a Mahalakshmi or a Hanuman store (also called as kirana shop in the local language) now have vegetables displayed for sale at the entrance of the shop.

The traditional mobile vending carts are probably on the decline at least in the middle and high-income localities of the city. These are now replaced by permanent vegetable vendors — often on encroached footpaths and walkways — that sell their stuff in the evenings. A new addition to these options is mobile vegetable shops. A small vehicle is parked at a busy junction on major roads, the vehicle dubbing up as a mobile shop containing assorted fruits and vegetables. In the above scenario, a weekly farmers market is one more option for the urban consumer.

The weekly markets are organized in the residential areas, preferably in an open plot of land. The market is located in an open and vacant plot either of the corporation and or of the housing society or a public minded citizen agreeing to make available the land for a nominal rent. The arrangement is mutually convenient since the market functions just for a day of the week and that too for a few hours in the morning. The associated hassles for land-related arrangements are nominal.

The market does not have any infrastructure except a vacant piece of land in the midst of densely populated area of the city typically having a number of residential apartments. On Sundays, a group of 50 to 60n farmers from neighboring villages and some as far as 50 km bring their produce. Most of these farmers have their own transport vehicles that they use for bringing the vegetables.

The produce is displayed under a makeshift structure created for the purpose. The market starts around 8 am and gets over by noon. Mostly fresh and seasonal vegetables are available. Some farmer groups have also started bringing fruits and selling some processed produce such jowar and bajra flour. Depending on the location of the market, about 400 to 500 customers are estimated to be visiting the weekly market.

These markets offer vegetables that are directly brought to the market from the field. The weekly market also offers consumers options to buy many seasonal vegetables at their doorsteps. In terms of prices, since there are other competing vending outlets, some even close to 10 meters in the vicinity of the weekly farmers markets, the prices are competitive. 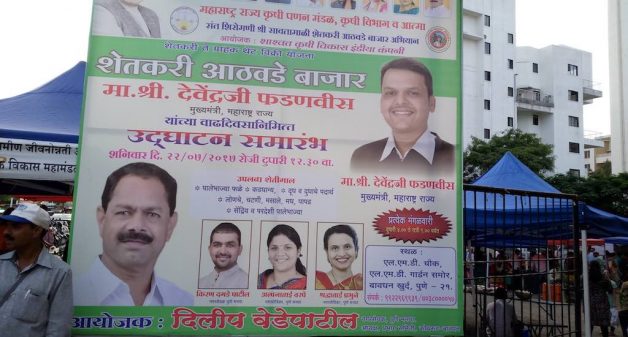 Another advantage that I see is that such markets for the first time offer a possibility to an urban consumer to see the face of the farmer. Here one encounters a farmer and sometimes even his family members who have accompanied the famer directly selling his produce. I have seen some conversations happening after the transactions are over.

Last but not the least, local political leaders see this as a good opportunity to score some brownie points. For them, it is a useful event to tell their constituency that they are doing something for them as also for the farmers. I have seen many posters and huge display of hoardings where even the ministers are invited for the inauguration of the weekly markets.

Do these markets work for farmers?

These markets are weekly and hence while offering a certainty to consumers for a predefined day for the market (usually Sundays), they do not offer flexibility to farmers. In other words, these markets cannot and will not take care of all the farm produce that a group of farmers will have. The farming system in our country is not that organized that farmers will plant vegetables in such a manner that these are ready only for such a market on a Sunday. A weekly market cannot substitute a well-functioning APMC market. However, it is one more option for farmers.

The weekly markets are also uncertain in terms of its place since the place is usually made available on the basis of the goodwill of the locally elected politician or a social worker. The same place need not be available if the owner of the place so decides.

During days of rains (at least 15 to 30 days in a three-month cycle), the place cannot be used, as it does not have any permanent fixed infrastructure such as raised platform and or a shed. Most of the open spaces in the city in the last two months were inundated with water during the monsoon and thus unsuitable for holding a market.

The most important limitation, however, is the scale of operations of such weekly markets. Our estimate is that as of now, there will be at most about 20 such weekly markets (this number is also on the higher side) in different localities of Pune city. For a population of over 6 million and each weekly market accommodating just about 30 to 50 farmers at the most, the weekly market is not really an option to other existing channels of sales be it APMC and or other decentralized new vending systems that are propping up in all parts of the city.

Even assuming that similar operations begin to scale up, Pune might need close to 500 such weekly markets across all parts of the city to cater to the growing middle class market. Even after assuming that so many weekly markets do come up, those can offer outlet for not more than 25,000 farmers at best.

Here again, one is assuming that all farmers have the means of transport at their disposal to bring their produce to the cities. A weekly market by its design will accommodate limited participation of both consumers and farmers. Thus, while it is a useful intervention if seen from the perspective of an urban consumer, it is sorely inadequate if seen as a farmer.