A widespread hazard like riverbank erosion, which continuously affects the poorest and the most vulnerable in the Brahmaputra River Basin in Assam, is not classified as a disaster and does not receive the swift emergency response as floods 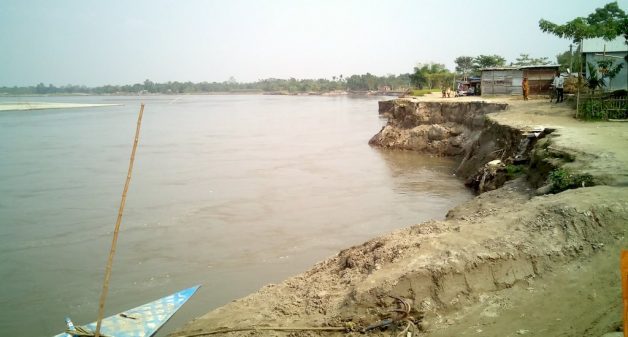 “The pain that riverbank erosion has caused is immense. My land was eaten away and I had to constantly shift. In my previous village Ramapara, I had shift 20 times!” says Zakir Hussain of Dighir Pathar village in Barpeta District of Assam. “The river would constantly gnaw at the banks. I had to shift my house constantly to escape the river’s wrath.”

Like Hussain, there are a large number of people who suffer continuous displacement and hardship in Barpeta, which has suffered particularly due to riverbank erosion. In 2007 alone, around 440 hectares of land was eroded and around 76 villages and some 2,500 families were affected from riverbank erosion. The total loss of property was around Rs 33 million. Around 6% of the district is affected by riverbank erosion.

The Brahmaputra River and its tributaries like Beki River cause riverbank erosion in the district. The calamity caused by riverbank erosion in Barpeta is symptomatic to the problem faced across the Ganga-Brahmaputra flood plains from bank erosion. The damage it causes to the poor and vulnerable is no less than that from the annual floods in Assam and several other states in the country.

The intensity of the problem can be gauged from the fact that the total land lost due to bank erosion caused by the Brahmaputra River in Assam alone has ranged between 72.5 sq. km per year and 80 sq. km per year between 1997 and 2007-2008. Further, property worth around Rs 182.24 crore was damaged as a result of bank erosion. 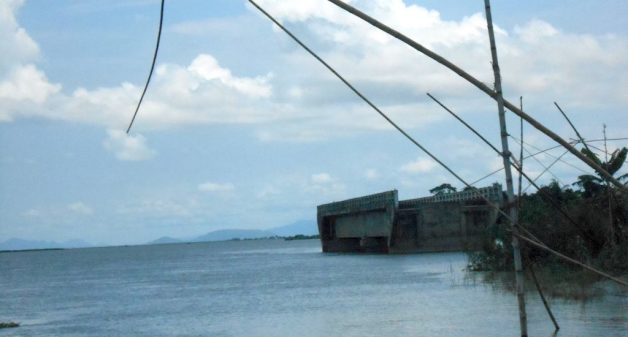 Floods, being classified as a disaster, elicit immediate response from the government in the form of rescue, relief, compensation and sanctions for repair of infrastructure. But hazards like riverbank erosion that continuously affects the poorest and the most impoverished sections of the community residing in the Ganga-Brahmaputra flood plains, is not classified as a disaster.

There is a pressing need for declaring riverbank erosion as a disaster. The action on bank erosion is currently restricted to bank strengthening through reinforced concrete or bamboo porcupines. But one needs to take a people-centric approach for addressing the problems emanating from river bank erosion that would contribute to the resilience building of the erosion-affected people through the provision of compensation, rehabilitation and an emphasis on human resource development amongst the erosion affected population through skill building initiatives.

Riverbank erosion is a natural phenomenon that results in the removal of material from the banks of a river. Most of the rivers in the Ganga-Brahmaputra basin are essentially braided alluvial channels that cause erosion through a combination of three different processes. The pre-weakening process involves repeated cycles of wetting and drying of the bank, which prepares it for erosion.

Thereafter, two processes begin to operate simultaneously. The particles and aggregates are directly taken away by fluvial action and subsequently the bank succumbs, resulting in a mass failure that involves the collapse, slumping and sliding of the material from the bank and into the channel.

While the phenomenon is natural, the impact it has is disastrous on the life and livelihoods of the riparian community who are settled on or close to the unstable banks of these channels. The resettlement is often an involuntary decision as the land gets eroded. Given the impoverished state of the riparian population, the resettlement happens close to the river, since land prices increase as one moves farther away from the river.

In a study on the riverbank erosion-affected families in 44 villages in Barpeta in 2015-16, we found that the loss of land was the most important loss faced by the families. Land, the most important asset possessed by any rural household, forms the basis of economic and social identity of the household. The bank erosion rendered the households landless and homeless and the families face involuntary displacement.

Their hitherto primary occupation, agriculture, takes a fatal blow. While the development induced displacement tend to displace people once, the families affected by bank erosion are subjected to multiple displacement.

The loss of land and the resulting displacement also reduces the livestock holding. Livestock is usually seen as a liquid asset on which the rural household can fall back during times of crisis. But as agricultural land is lost to the river, the availability of fodder also gets reduced. Hence keeping livestock becomes an expensive proposition.

Similarly, the loss of homestead land also means a loss of small water bodies located in the homestead, where the riverine population would otherwise engage in fishery for self-consumption. We found that post-displacement the consumption of fish drops among the affected population.

The landlessness among the bank erosion affected community breeds certain kind of occupational insecurity. As people are forced to move out of agriculture and get engaged in labor or small business, there is an increased demand for family labor. The demand increases with the increase in the size of the household. The average family size among the erosion-affected people in Barpeta was seven, compared with a national average of five.

In the absence of proper skill training, a large number of the affected people, who are also young, are forced to enter the unorganized labor market and undertake migration. This disrupts the normal functioning of a household. Children are often the prime victims of this because they have to dropout from schools following the relocation of the household.

Apart from the requisite skills, lack of access to cheap credit also constrains the erosion-affected towards undertaking superior non-farm occupations. In Barpeta, the credit gap is usually filled up by moneylenders, who would provide credit to the people at exorbitantly high rates of interest, often as high as 40% on the principle amount. Reduction of farm-based livelihoods, limited option for superior non-farm livelihoods and lack of access to formal credit together keeps the erosion-affected household in a state of impoverishment.

As have been found among the bank erosion-affected people in Bangladesh, the affected households in Barpeta also fall back on the informal social networks of the community (colloquially called samaj) during times of crisis. The samaj plays an important role in helping the affected family to perform social obligations like funeral, marriage, in providing a collective identity and in facilitating collective action towards combating the bank erosion through constructive works like construction of crude embankments with the locally available resources or the repair of bamboo bridges.

Given the kind of impoverishment that riverbank erosion imprints on the life and livelihoods of the riparian communities, it is important to go beyond the usual engineering-centric bank strengthening activity and to build an action plan that puts the affected people at the center of the planning process. A series of actions are required for this.

First, riverbank erosion has to be classified as a disaster. Currently, it is not so classified and the affected population is not entitled to get any relief through compensation. Recent modifications in the guidelines for the State Disaster Relief Fund (SDRF) provisions the state government to use around 10% of the SDRF to provide relief to people who are affected by “disasters within the local context of the state”. Since 2015, the Government of Assam has also designed a scheme for rehabilitation of erosion-affected people. There is a need that riverbank erosion, like floods, should automatically qualify as a disaster and their qualification should not depend on the whims of the state government.

Second, emphasis needs to be placed on skill development to harness the demographic dividend that exists in such areas. Skill enhancement is particularly important among this section of the relatively young population because skills are an asset that serially displaced community can continue to possess, unlike other assets like land and livestock.

Third, provisions should be made to improve the access to formal sources of credit that would enhance and not constrain the developmental process. One could use the informal social networks for starting formal groups of credit circulation through the creation of self-help groups (SHGs).

Sayanangshu Modak works with Foundation for Ecological Security, a non-governmental organization, and is based in Udaipur, Rajasthan.

Nirmalya Choudhury is a researcher based in Mumbai.

Sayanangshu Modak works with Foundation for Ecological Security, a non-governmental organization, and is based in Udaipur, Rajasthan.