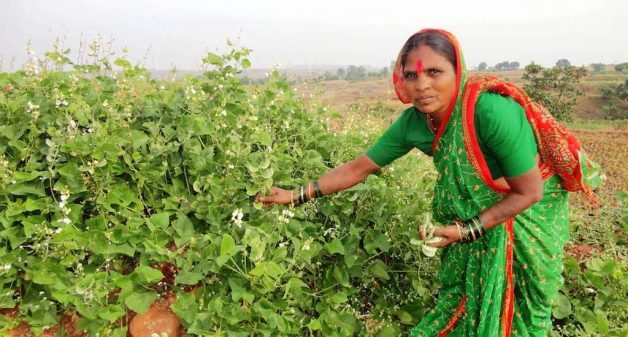 Rahibai in her field of native hyacinth bean that she has conserved. (Photo by MITTRA)

“Native crop varieties are not only drought and disease resistant, but are nutritive and retain the soil fertility as they do not need chemical fertilizers and excessive water,” Rahibai Soma Popere tells VillageSquare.in with conviction. Her words are borne out of experience.

With a single-minded devotion, Rahibai travels across Maharashtra and beyond to conserve indigenous seeds. Besides conserving them, she creates awareness about the importance of organic farming, conserving indigenous seeds, agro-biodiversity and wild food resources.

Besides the advantages of native crop varieties cited, conservation of native seeds is important to prevent the exploitation of farmers who are already distressed. Native crops are likely to become extinct as large seed companies are promoting and patenting hybrid seeds. Farmers become dependent on the companies for seeds, as hybrid seeds cannot be saved by farmers in the field for the next sowing season. In this context conservation of native crops becomes essential to ensure genetic diversity and to ensure the welfare of farmers and consumers.

Selection and saving of good seed is central to sustainable agriculture and global food security. Recognizing the need to save landraces, Rahibai has conserved many native crops including 15 varieties of rice, nine varieties of pigeon pea and sixty varieties of vegetables, besides many oil seeds. Hailing from Kombhalne village in Maharashtra, Rahibai, in her early fifties, also wants the community to keep farm chemicals away – for a good reason.

“Villagers were falling sick frequently after eating food prepared from hybrid crops,” Rahibai told VillageSquare.in. She understood that the nutritive value of traditional seeds was much higher than that of hybrid seeds. So she started collecting local seeds with the help of other women farmers from Akole taluk in Ahmednagar district of Maharashtra. She formed a self-help group (SHG) named Kalsubai Parisar Biyanee Samvardhan Samiti to conserve native seeds.

Rahibai’s seven-member family farmed when it rained and migrated to Akole the remaining months to work in the sugar factory as laborers. They practiced rain-fed agriculture on three acres of land, while four acres remained barren.

True to the Marathi saying ‘One is the pioneer of ones own life’, Rahibai created her own water harvesting structures such as the farm pond and the traditional jalkund. She made two acres of wasteland productive and started earning from the vegetables she grew there.

With support from Maharashtra Institute of Technology Transfer for Rural Areas (MITTRA), she learnt to rear poultry in her backyard, establish a nursery and various techniques in organic farming. She is skilled in the four-step paddy cultivation that includes use of paddy straw ash in the nursery before planting and use of Gliricidia sp. leaves as green manure before transplanting seedlings. Her crop yield has increased up to 30% with improved cultivation practices. She has tried and implemented innovative practices such as cultivation of beans on farm bunds.

With successful implementation of all that she learnt, Rahibai now trains farmers and students on seed selection, techniques to improve soil fertility and pest management among others. She supplies farmers with seedlings of native crops, encouraging them to switch to native varieties.

Rahibai also heads another SHG Chemdeobaba Mahila Bachat Gat in Kombhalne, through which many social initiatives like health camps, supply of solar lamps are organized, besides the agricultural initiatives.

Raghunath Anant Mashelkar, former Director General of the Council of Scientific and Industrial Research has honored her with the title Seed Mother. Along with well-known social activist Anna Hazare, Rahibai chaired a program arranged by Agriculture Technology Management Agency at Ralegan Siddhi.

Akole Taluk Patrakar Sangh felicitated her on International Women’s day in 2016, for her work in biodiversity conservation. There have been many recognitions including the one by Krishi Vigyan Kendra of Bhableshwar. 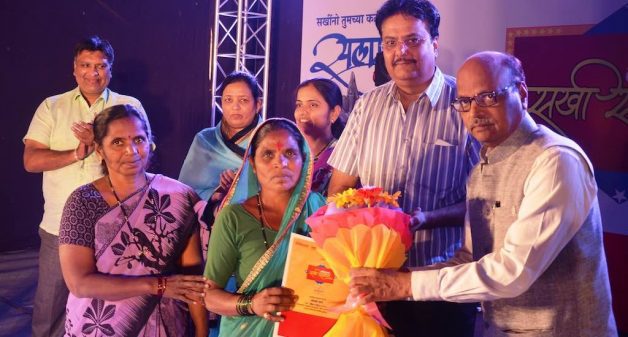 Rahibai being felicitated for her contribution in saving native crops. (Photo by MITTRA)

Five varieties of hyacinth beans conserved by her are being evaluated for morphological and yield traits at Mahatma Phule Krishi Vidyapeeth (MPKV) in Rahuri.

Having experienced the benefits of growing native crops, Rahibai wants more farmers to start farming the same. Towards this goal, a seed bank has been established. Community members manage the seed bank. Farmers are given seeds with the condition that they return twice the quantity of seeds they borrowed. This is proposed to be scaled in tiers at the village and block levels.

The seed bank distributes 122 varieties of 32 crops. Before the seed bank was established, farmers used to buy hybrid seeds, often on borrowed money. “If we use indigenous seeds and stop using chemical fertilizers, we can save almost Rs 5,000 a year,” the farmers told VillageSquare.in.

Rahibai has applied for registration in Protection of Plant Varieties & Farmers’ Rights Authority, India (PPV & FRA) under Farmers’ Varieties. To promote the cause of conservation of landraces, she participates in programs such as the Indo-German Bilateral Co-operation in Seed Sector organized by PPV &FRA, besides local seed and agriculture fairs.

While Rahibai’s efforts are making a visible impact at the district and state level, it is an immense contribution towards genetic diversity in the country’s agricultural sector.

Ashlesha Deo is a development professional working with the Maharashtra Institute of Technology Transfer for Rural Areas (MITTRA) in Nashik, Maharashtra.

Ashlesha Deo is a development professional working with the Maharashtra Institute of Technology Transfer for Rural Areas (MITTRA) in Nashik, Maharashtra.