Women of Lalganj mobilize community to bring doctors to their doorsteps

Despite insufficient income, lean periods during monsoons and unexpected hardship such as the floods this year, the Sumra Muslim potters return every year to Sarkhej Roza, where the pots they make are bought by Hindu wholesale traders, evoking secular unity 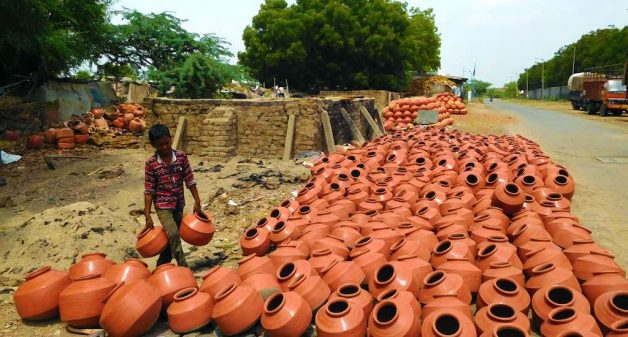 Pots on display for sale at Sarkhej Roza. (Photo by Gajanan Khergamker)

Every morning, Rehman Sumra of Kheralu village in Mehsana district rummages through his wares, salvaging whatever he can, packing them for his annual journey to work. Each passing day brings increased anxiety to the Muslim potter who, like his fellow potters, was hit the worst by the most recent floods in Gujarat. “With the rains having stopped, it’s time to go to Ahmedabad and start work,” he says, looking at the cloudy skies.

In September, more than hundred potters belonging to the Sumra community head for Ahmedabad’s Sarkhej Roza from their villages in Mehsana. In Sarkhej Roza, they set up makaan and karkhana, as they call their home and workshop, at spaces they take on a five-year lease. 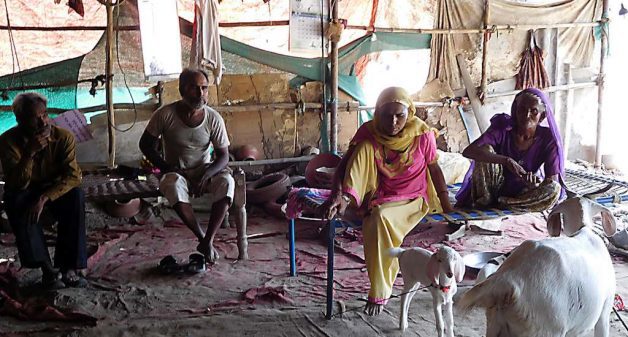 Potter Rehman Sumra (second from left) in Sarkhej Roza with his family. (Photo by Gajanan Khergamker)

Running out of money as their work had been delayed, Rehman incurred unexpected additional expenditures in repairing his flood-hit village home. While the government forces rescued stranded citizens from Banaskantha, Patan and Mehsana districts in north Gujarat, the badly affected potter community waited out the monsoons.

“We are through with our savings, there’s no work in the village, and to top it, we suffered financial loss owing to the rains,” Mariam, Rehman’s wife, told VillageSquare.in. Having lived off their earnings during the heavy monsoon, the Sumras are keen to get back to work.

In spite of the hardships and hand-to-mouth existence, the Sumras look forward to their work. For the economic activity has carved out a beautiful socio-cultural association as the Muslim Sumra families make pots for the predominantly Hindu kumbhars in Gujarat, Rajasthan and Maharashtra, molding secular ties, especially in troubled times.

With the rain clouds receding and humidity decreasing, Rehman and his wife Mariam are set to return to Sarkhej Roza to start their work once again. For the next eight months, the Sarkhej Roza suburb of Ahmedabad will be home to Rehman and hundreds of other Muslim potters.

From an imminent Diwali until the next chaumasa, as they call the monsoons, they will make thousands of pots that would be bought by wholesalers and retailers alike. The Sumras specialize in making pots of different shapes and sizes for storing water and keeping it cool during summers.

Each kumbharwada, as a settlement of potters is known, has approximately 20 potter families residing and working together. The potter families in a kumbharwada are mostly from the same village. The shanties are lined next to each other and covered with huge plastic sheets. Pots are placed in beautiful symmetrical patterns, in rows and stacked vertically, to be sold in the wholesale market.

The families in a kumbharwada have just one landlord who owns the entire plot and rents out each shanty for Rs 1,200 per month. With an additional expenditure on electricity, the charges add up to Rs 2,000 per month and the potters do not pay any deposit. They make five-year agreements and work entirely on trust.

The potter families who come to Sarkhej Roza have been doing so regularly for the last 15 years. Some like Noori have been coming for 20 years. “In fact, I live here and go to my village only when I have to attend a family function,” the 50-year-old from Sidhpur in Patan district tells VillageSquare.in. For many, the temporary homes seem more permanent to them than the houses in their native villages.

The pottery process isn’t exactly an easy one. A Sumra tells VillageSquare.in that getting the clay or chikni mitti, the raw material, is tough. Clay is sourced from the beds of lakes of Sanand. A tractor load of clay for making about 500 pots costs Rs 2,000. Once the pots are made, they need to be colored with geru (earthen color), which is ordered from Thaan, a village about 120 km from Sarkhej Roza.

Rehman’s brother-in-law, 20-year-old Imran Haji Sumra, lives in an adjacent shanty with his family and transports the pots to cities such as Surat and Valsad in South Gujarat. Within a few years of starting work, he has been able to buy a mini truck that can transport 700 pots. For instance, to deliver pots in Surat, 350 km from Ahmedabad, Imran earns Rs 7,000. He earns regularly during the season.

Making ends meet until there is enough demand for pots is tricky for the potters. Sometimes the pots don’t sell as expected. Then the Sumras leave the pots in their karkhanas and return to their village; they come back next year and sell the same during Diwali.

Contrary to the stereotyping associated with the community, men and women work shoulder to shoulder. While Rehman does arduous physical tasks, Mariam handles those that are equally backbreaking. Lifting heavy pots, bags of clay and creating artistic pots are gender-neutral activities for the community.

Shahida, one of Noori’s daughters, comes to Sarkhej Roza every year to help her mother in the family business and then returns to her marital family in Mandali village in Mehsana district. “I help my mother in coloring and baking the pots,” Shahida informs VillageSquare.in while cooking for the family. 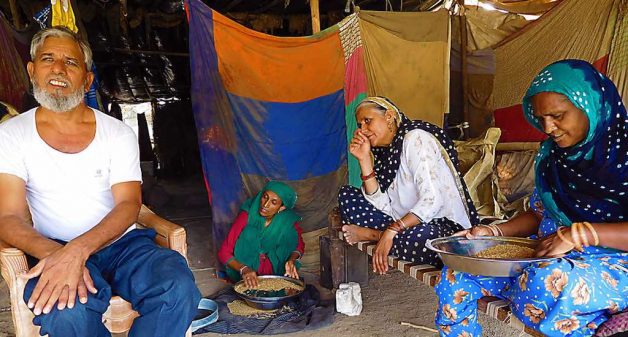 Noori (second from right) with her daughter and parents-in-law. (Photo by Gajanan Khergamker)

Noori’s parents-in-law Ibrahim Sumra and Ruksana rest on the makeshift bed as Noori ducks below the low ceiling fan to sit next to them. “It is important to keep the fan low so the pots can dry quickly,” she explains.

This year Noori, Imran’s mother, has brought three goats to ensure milk for her grandchildren. “Lekin, inko rakhna bhi toh mehenga padta hai (But rearing goats too is a costly affair),” she says. Every day she spends Rs 100 on fodder for the goats.

Besides helping the men make pots, all the members of the potter family pitch in to make a collective earning. If the man of the house is busy with the pottery business, the woman sets up shop selling everyday items in her makaan. Mariam runs a makeshift store selling grocery to the other potters. The children take care of the goats.

While the potters comprise only Muslims, they deal primarily with Hindu wholesale dealers who truck away pots in bulk. Ahmedabad’s Vejalpur-based Girish Prajapati, a regular wholesale dealer says he feels at home when he comes to Sarkhej Roza to buy pots. “I am a Prajapati, a Hindu potter and I always buy my wares from a Sumra, a Muslim potter. We have been doing business for many years now, without a single problem,” he tells VillageSquare.in.