With proactive villagers and panchayat leaders, Ansarwada in Maharashtra, chosen to be a model village under Saansad Adarsh Gram Yojana, has made satisfactory progress, but has to clear stumbling blocks to become a full-fledged model village 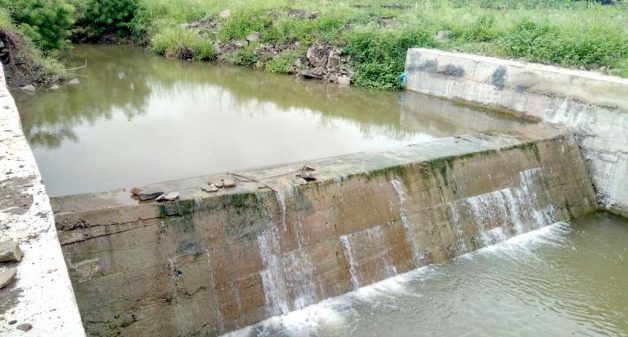 The continuous contour trench in Ansarwada, built under the SAGY scheme. (Photo by Vijay Suryavanshi)

Ansarwada in Latur district of Maharashtra is like any other village in India. The village in Nilanga taluk with a population of 2,853 was selected to be a model village under the Saansad Adarsh Gram Yojana, right after the scheme was announced by Prime Minister Narendra Modi in 2014.

Saansad Adarsh Gram Yojana (SAGY) is a program to develop villages into adarsh gram or model villages. Each Member of Parliament (MP) chooses a village, based on the community’s demand and participation. There is no specific guideline to choose a village for SAGY, but generally the most backward and needy village is chosen so that the actual transformation is perceptible and similar strategies can be adopted in other villages.

As this program has no exclusive resources or manpower for developmental works, the interest of the MP is the sole driving force. Often selection of a village is a political choice, but to the villagers it does not matter as it only leads to improvement of their village. As for Ansarwada, the proactive village leaders and community helped it to be chosen.

“The MP has always been interested in Ansarwada and has a personal connect with the people here,” Ajit Mane told VillageSquare.in, explaining how their village was selected. The villagers expressed happiness that Ansarwada came under SAGY scheme since some good infrastructural works have been executed in the last three years.

Two canals and continuous contour trenches (CCT) under the state government’s Jalyukt Shivar Yojana, besides drains, have been constructed. A powerhouse has been constructed and houses that were not electrified earlier have now been electrified. The crematorium and the approach road to it have been revamped. The 2 km long approach road to an arterial road, besides a 5 km stretch of the said arterial road that connects Ansarwada to Nilanga, which is 22 km away, have been completed. A tree planting drive is also going on. 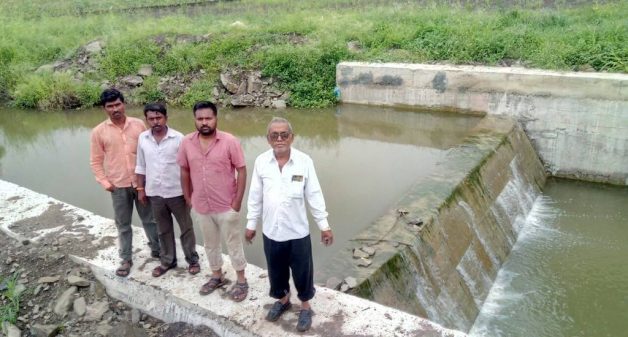 A few villagers of Ansarwada near a continuous contour trench, one of the works executed under SAGY scheme. (Photo by Vijay Suryavanshi)

To improve the digital literacy of the panchayat school students, hands-on training on computers and on the use of Internet have been initiated. Work on community gymnasium and school compound wall have partially been completed. Under Maharashtra Center for Entrepreneurship Development’s (MCED) district training program, marginalized students were equipped with skills in MS Office. Under another of MCED’s district training programs, farmers were trained in organic farming.

The works fall under various schemes of the government and it is difficult to attribute the works to SAGY, but it is obvious that SAGY helped in taking the works forward. Ansarwada panchayat is very active and persuasive in getting the benefits of various schemes, overcoming local deterrents. Panchayat members visit the district collector’s office often and even Mantralaya, the administrative headquarters of the state government, to get things done.

Everyone agreed that after coming under SAGY the bargaining power of the panchayat has increased. Panchayat members are able to persuade officials in the collector’s office to get things done. “We tell them that they would be in trouble if we did not get what has officially been sanctioned, since ours is an adarsh gram,” they told VillageSquare.in. To get what is rightfully theirs, villagers had to agitate earlier, which is not the case now.

So a major credit can be given to the increased bargaining power given by SAGY for what has been achieved in Ansarwada so far. Fortunately the panchayat is strong enough to use it to their advantage unlike many other SAGY villages. According to Mane, except a few, most of the SAGY panchayat heads were not satisfied with the progress and pointed out gaps in the schemes at a meeting for SAGY panchayat members from the Marathwada region held at Verul, Aurangabad.

It is obvious that more work has been done in Ansarwada, compared to other villages. But from the villagers’ point of view, the works had been pending and should have been completed long back. To find out the contribution of SAGY in the development of Ansarwada, we interacted with a group of villagers.

“Initially all the villagers had high hopes. We thought many of our problems would get resolved but there has not been much direct benefit because of this program,” they told VillageSquare.in with disappointment. When the village was chosen, political and bureaucratic stakeholders made a lot of promises, but most have not been fulfilled. Inability of MP and officials at the collectorate to allocate more time for the program and disagreements between village stakeholders seem to be a challenge for Ansarwada.

“For every small thing we need to go to the collector’s office in Latur which is 65 km away or even to Mumbai. It takes about 15 hours to reach Mumbai with at least three breaks in the journey. And getting appointment to meet these officers is very difficult,” said the villagers.

Following a communal conflict between two groups of youth, those in charge of implementing the works were reluctant to proceed. Distribution with limited supplies always leaves many unsatisfied. In such a situation the reluctance of the people in the implementing agency can increase. It was expected that through this scheme and through the interest of the MP, all such barriers could be overcome to make Ansarwada a model village. “If political representatives are sincere and active enough then there is no need for any scheme,” said the villagers about the slow pace of development work in rural areas.

The expectations and suggestions of panchayat members would help SAGY’s next phase where MPs are expected to scale up and bring more villages under SAGY.

There is no training for the stakeholders with respect to specific SAGY action points. Such training needs to encompass everyone, from MP to gram sevak, so that everyone knows his or her role and accountability and what to expect from the others. There needs to be clarity on converging the existing schemes, which are around 50, and on the responsibilities of different cadre.

“I don’t know what kruti-aarakhada (village development plan) is, though everyone talks about it. Collector office people say they made the plan but no one has informed us about it or how it will fulfill our needs,” Ajit Mane, former panchayat chief and panchayat member now, told VillageSquare.in. Often villagers are unable to connect to the needs which are not immediate in nature such as bathrooms and toilets. In such cases, the activities have to conform to the needs of the villages and as per their priorities.

“Many officials at the collectorate have no idea about SAGY. They ask us what to do and how. They are not convinced that something extra needs to be done for a SAGY village,” said the Ansarwada panchayat members. They feel that there should be a contact person for SAGY program to facilitate the work at the collectorate. They say that they lose enthusiasm in frequent and futile travel, trying to speed up the work. Some of the power vested with the MP and the collector can be delegated to the panchayat.

There is a need for sectoral focus for the works under SAGY. The practice of identifying villagers’ priorities with participatory method and drawing up a village plan needs to be refined.

Rural development is the elephant, which is expected to run, swim or fly while moving this animal in itself is a challenge. For meaningful change through SAGY, motivation of MP is crucial but proactiveness of the panchayat and villagers is also necessary. Some improvements can make this process smooth and easy for the next phase.

Abhijeet Jadhav works with Center for Development Research in Pune. He was earlier faculty at Tata Institute of Social Sciences, Mumbai. Views are personal.