Farmers growing fruits and vegetables in Kashmir are doubling as beekeepers to boost their incomes, taking advantage of vast tracts of horticultural land with their abundance of flowers 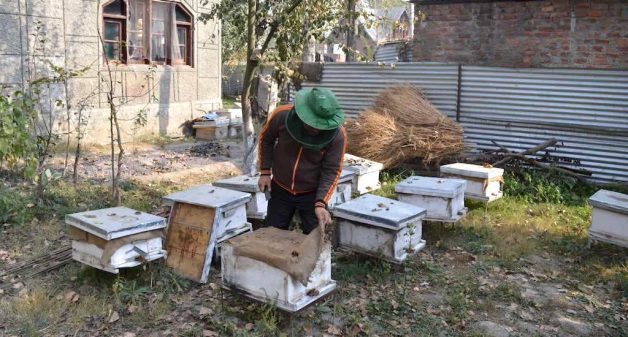 A Kashmiri beekeeper is seen attending to his beehives. (Photo by Athar Parvaiz)

Towseefa Rizwi, a woman entrepreneur in the Shalhar village of Bandipora district in north Kashmir, compares herself with the women working in the government sector, and finds one big difference: “I am independent.” Rizwi is the owner of Kashmir Valley Agro Industry (KVAI) where her husband Parvez works as production manager.

She mainly deals in honey, which she processes and packages at her own plant in the village. “I always had the desire of starting my own business. And I am thankful to honey bees for making me realize my dream,” Rizwi told VillageSquare.in with a big smile on her face.

Kashmir Valley, with huge resources available, especially vast tracts of horticultural land, has a great potential for beekeeping and exporting honey to different Indian states. This has prompted the agriculture department of Kashmir to promote beekeeping in the region. Horticultural farmers who took to beekeeping are reaping rewards for their efforts. Apiary business has also given rise to successful processing units.

According to Rizwi, the entire area has been known for keeping at least one or two beehives which are mostly traditional Kashmiri beehives. “I thought why can’t we do it on a big scale? And one day I told my husband that we will set up our own honey processing plant,” she said. “So we applied for a loan and set up the plant which has a capacity of processing up to three tons of honey per day.” She has been doing this business for 10 years now. 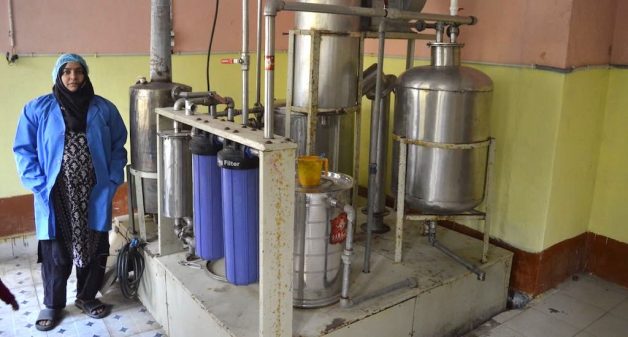 Towseefa Rizwi at her honey processing plant in Shalhar-Bandipora. (Photo by Athar Parvaiz)

Ghulam Mohammad Bhat, a beekeeper in Rizwi’s village said that he decided to keep bees after he saw Rizwi doing well in her beekeeping business. “I got five bee colonies from the government at subsidized rate in 2015 which have now increased to 20,” Bhat told VillageSquare.in. “Though I lost a few of them to harsh weather in April this year, I feel I am getting a lot of financial benefit. For example, I got a profit of Rs 20,000 this year.”

For Zamrooda Khan, a woman entrepreneur in downtown Srinagar, defeating the greatest challenges of life would not have been easy if her bees had not kept her busy. Draped in a black shawl with her head covered in a scarf, she cuts a striking figure. Miseries and melancholic moments in her life have failed to shake her resolve for living a dignified life. Khan has not only fought the battle against breast cancer successfully following her divorce, but has also turned herself into a small entrepreneur.

Khan realized that her job at a private school was fetching her too measly an amount and was not enough for meeting her expenses. This, she says, made her think about additional income to shore up her earnings from the school.

“Since my father used to be a successful beekeeper of his times and I had learnt many things from him about beekeeping, I wasted no time and started a small apiary,” Khan told VillageSquare.in. She started her business, Busy Bee Honey Apiary, after receiving further training from the agriculture department in 2003. “This job suited me, for it kept me busy and that too with the nature’s gifted beings called honey bees.”

For her, it is not a business, but a small enterprise for feeding her daughter and son, besides getting medicines for her. She produces around 100 kg of honey from her beehives every season, which fetches her sustenance. “But I certainly want to expand this venture by setting up a processing plant in future. I have passion for this profession,” Khan said.

Migrating to beat the weather

“I am strongly interested in increasing the number of my bee colonies. If I have more colonies, I can think of migrating them out of Kashmir during winter. Those who have at least a truck-load of bee colonies, hire trucks in winters and migrate the colonies to warm areas that have more crops,” Bhat told VillageSquare.in. Most beekeepers of Kashmir shift their beehives to Jammu, Rajasthan, Gujarat and Maharashtra in winters.

In the Gulgam village of northern Kupwara district, more than 12 villagers, who earn their livelihoods from beekeeping, have migrated their beehives to Rajasthan and Gujarat. “Shifting the hives out of Kashmir during winter makes a lot of economic sense to us. It gives us an extra crop and keeps the bees healthy as well,” Mohammad Yaseen, a beekeeper of Gulgam village, who has 140 beehives, told VillageSquare.in.

“We are now promoting honey bees as agents of pollination which will not only result in increasing crop productivity, but will also increase honey production. The idea is also to generate employment through this sector by value addition,” Farooq Ahmad Shah, chief technical officer at Kashmir’s Department of Agriculture, told VillageSquare.in.

Presently, the industry is confronted with the threat of Varroa disease caused by Varroa mite that feeds on larvae and adult bees. During the past two-and-half decades, this disease has destroyed Apis cerana, the honeybee, which has traditionally been found in Kashmir, almost entirely and has also caused extensive damage to Apis mellifera, the European honeybee, which was brought to Jammu & Kashmir from Europe.

“The industry suffered a major setback in 1982 when majority of Apis cerana bees were wiped out. Then the industry was revived with the introduction of Apis mellifera. But it also got affected by the disease in 2005-06 resulting in extermination of up to 80 % of the colonies,” Shah told VillageSquare.in.

However, Shah said, the industry has again made a comeback in recent years with the help of technology and insecticides. According to Shah, presently there are over 35,000 honeybee colonies in Kashmir and the number of registered honey cultivators is 1,484. As per the estimates of agricultural experts, there is a potential for 120,000 colonies in Kashmir considering the huge availability of horticultural land. The Kashmir region has 161,682 ha of land under horticulture and it is increasing every year, as some farmers prefer growing fruits rather than rice.

According to Farooq Ahmad, a former agriculture officer who has published several papers on beekeeping in journals such as The Bee World and Indian Bee Journal, and an orchardist, who has 10 kanals (around half a hectare) of orchard, one should have at least three bee colonies for ensuring a good production. “So, you can just imagine the potential we have for apiculture considering the availability of thousands of hectares of horticultural land in Kashmir,” Ahmad told VillageSquare.in.

But, Ahmad said that the Jammu & Kashmir government needs to address some pressing issues, which are hurting the beekeeping industry in Kashmir. “The most important of these issues is the lack of proper training for beekeepers and the unavailability of preventive and control measures for tackling pests and diseases,” Ahmad said.