From an impoverished village woman to mushroom farmer and successful entrepreneur, Anita Devi has inspired hundreds of women in Nalanda to adopt the profitable venture of mushroom cultivation 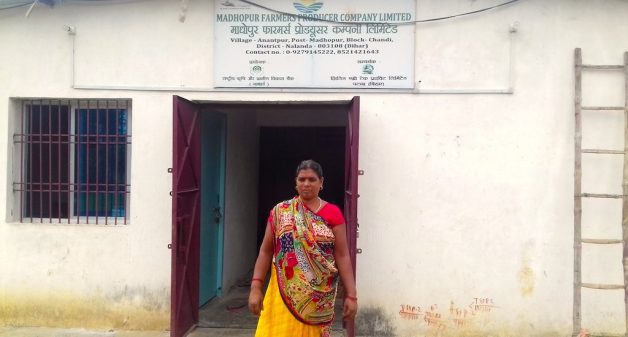 The winter chill in Bihar brings out smiles on Anita Devi’s face because it would help her grow more organic mushrooms along with hundreds of other women in Anantpur and 10 neighboring villages in Nalanda district. By taking to mushroom farming in a big way, Anita has, like many other rural women in the vicinity, ensured a steady income for her family.

The women mushroom farmers are now respected for earning money and have contributed to change the socio-economic condition of their families for the better. “Mushroom farming has not only empowered me and hundreds of other women, it has given boost to our rural economy,” Anita, in her late 40s and speaking like an executive in her office adjacent to her house, told VillageSquare.in. “Thanks to mushroom growing, women in villages are now earning members, and are no longer dependent on their husbands and family.”

Anita’s words sound convincing as she has single-handedly changed her own fortune, and that of hundreds of other women by mushroom farming in past seven years. She is now well-known for motivating, inspiring and engaging a large number of women to grow mushrooms in her native village Anantpur and neighboring villages under Chandi block in Nalanda district.

When she started her journey to grow mushrooms in 2010, the scenario was difficult and unfriendly. It was a totally new concept in her village. She was trained in growing mushrooms at Dr. Rajendra Prasad Central Agriculture University in Pusa, Samastipur district, and G. B. Pant University of Agriculture and Technology in Uttarakhand and also learnt about mushroom seed production. “When I was desperate to earn something, I approached Krishi Vigyan Kendra, Harnaut in Nalanda. The officials advised me to grow mushrooms. After that, I began my new journey of success.”

Anita’s move to grow mushrooms has given an opportunity for her husband Sanjay Kumar, who was struggling to earn a livelihood. Now he is a part of her team and helping her in her mushroom venture. With respectable profits from mushroom farming, Anita’s husband has opened a garment shop in nearby Madhopur bazaar. Her two sons are pursuing graduation in horticulture and her only daughter is pursuing a B.Ed program.

“Some co-villagers, particularly women, used to taunt me for growing Gobar Chatta, as wild mushroom is known locally. They hardly missed an opportunity to embarrass me by telling that it will not help me to change my life,” Anita, a graduate in home science, told VillageSquare.in. “Ignoring all this during the initial days, mushroom farming proved successful and I was lucky to emerge as a role model for others that inspires many women to join me and follow me. They have adopted mushroom cultivation. Now there are hundreds of mushroom growing women farmers here.”

She is right. Her hard work and success to grow mushroom first attracted dozens of women from her village to start mushroom farming, followed by women in neighboring villages. After that, her nondescript village Anantpur has been declared a Mushroom Village in 2012 by a team of state agriculture department comprising the principal secretary, district administration, and experts from agriculture universities. Her success in popularizing mushroom cultivation and close association with mushroom is such that local people in Nalanda call her Mushroom Mahila (mushroom woman).

Encouraged by her success, Anita has formed Madhopur Farmers Producers Company Limited at her newly built house to involve more women from neighboring villages to grow organic mushrooms. There are nearly 250 women currently attached with her company. “In last few years, I have visited several villages in Nalanda and formed self-help groups (SHGs) of women. I have targeted to double the number of women. If things move as per planning, I will fulfill the target of including 500 women to grow mushrooms by next year.”

These women have been linked to SHGs formed under Jeevika, the Bihar government’s rural livelihood program. Jeevika has been promoting large number of women SHGS with various incentives to take up mushroom farming to earn a livelihood. “At present, more than 50 women are growing mushrooms in Madhopur Dih village, 30 women in Rajan Bigha village, 40 in Raitha village, 25 in Soradih village, 15 in Raisha, 10 in Kurthia village and dozens in other villages,” Anita told VillageSquare.in.

She said that dozens of women associated with her company are cultivating mushrooms in villages outside Chandi block, including 100 women in Saril-Chak village under Nalanda block, and two villages in Bind block.

Anita and other women are mainly growing Oyster and Milky White mushrooms because of the ease in growing them. Oyster mushrooms grow on almost all types of agricultural wastes, which are locally available free of cost.

“September to March is the best season here for cultivation of mushroom. We are growing mushrooms during the period without any air-conditioning facility because it is possible during comfortable weather,” she told VillageSquare.in. “We also grow some mushroom during summer.”

On an average, the daily production of oyster mushroom from her center is around 15 kg to 20 kg, which is sold at Rs 80 to wholesalers and Rs 120 to retailers. Her monthly income is more than Rs 25,000 from mushroom farming. In a reference to other women mushroom growers, she said that mushroom is sold both from their houses where buyers come directly as well as in the market. 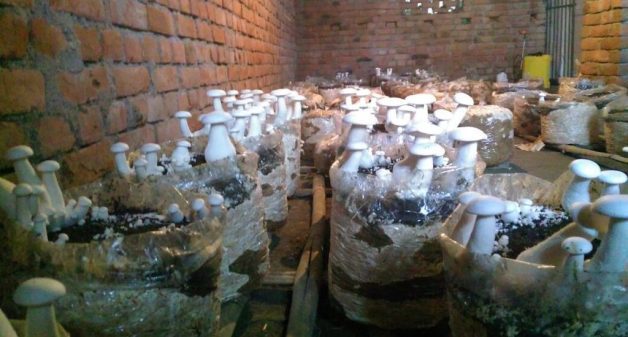 Mushrooms are being cultivated indoors in Anantpur. (Photo by Mohd Imran Khan)

By growing mushrooms, women have transformed their luck. Mushroom has given them self-confidence, economic independence and an identity. “Women have successfully changed their status from poverty-stricken to prosperous thanks to mushroom,” said Anita. For women, who have no extra source of income, growing mushrooms is simple, viable and profitable venture. “I have encouraged women to grow mushroom in their house with virtually no investment to begin with. Mushroom is easily grown indoors during the winter.”

Bipin Kumar, field officer of Jeevika in Nalanda, said mushroom cultivation is boosting the income of women in rural areas. “Mushroom farming has given a tremendous boost to women’s empowerment,” he said.

According to Bipin, who has been in constant touch with women of SHGs in villages spread across Nalanda, mushroom growing has positive impact on their lives and empowered them economically and socially and helped them to become self-reliant. It has also paved the way for farm diversification.

“When I started growing mushrooms, I used to purchase 20 kg of seed from Rajendra Agriculture University because seed was not available locally. When dozens of women joined me to grow mushroom and demand for seed increased manifold, I requested the university to provide me 300 kg of seed. It refused on the ground that so much seed is not available for one buyer. So I decided to set up a mushroom seed production facility at Anantpur.”

Anita’s lab has been selling mushroom seeds to small-scale mushroom growers, mostly women, NGOs and government agencies. “At present I am selling 20 kg to 25 kg mushroom seed daily on an average but its demand will increase with more chill and fog,” she said.

She pointed out that mushroom is being cultivated on a large scale in Nalanda, as it is profitable farming, unlike traditional crops and vegetables. At present, the market is growing and is far better than it was few years ago. There is no problem to market mushroom after harvesting, she said.

Uma Shankar Bhagat, district project manager of Jeevika in Nalanda, told VillageSquare.in that mushroom cultivation by small and marginal farmers, particularly women, has proved a successful way out of poverty. “The number of women mushroom growers is growing in Nalanda, known for mushroom farming in Bihar.”

He acknowledged the role of Anita Devi in popularizing and motivating women to take up mushroom cultivation. “Anita is not only an icon of mushroom growing, she is also known for mushroom seed production and mushroom processing facility in rural Nalanda.”