Taking advantage of the plentiful water bodies in Assam, the production and supply of fertilized fish eggs has emerged as a promising and sustainable livelihood for unemployed youth in rural Assam 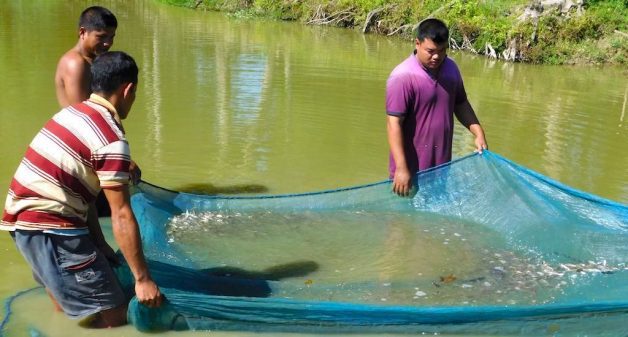 Gohainpukhuri village in Narayanpur administrative block of Lakhimpur district has a predominant population of Mising community. Located on the banks of Luitsuti River, a tributary of Subansiri River, agriculture is the main occupation of the Misings of Gohainpukhuri and neighboring areas.

The community engages in fisheries mostly for domestic consumption. Those who rear fish do it the traditional way, namely, captive fisheries and not by scientific rearing methods. Around 90% of the households in the village possess a pond with an average size of 1.5 bigha (1 bigha = 1,332 sq m) and most of the ponds are underutilized. Till recently, fish rearing was not a profitable and popular livelihood option in Gohainpukhuri because of low production. That has now changed.

The low production of fish is due to unavailability of quality fish seeds (fertilized fish eggs), infrastructure, and lack of awareness about the economic significance of scientific rearing. The other bottlenecks include poor feeding practices and high cost of feeds and poor pond management. Of the constraints, unavailability of good quality fish seeds was found to be very critical.

Assam can be called a non-vegetarian state, as over 95% of the population eats fish. The state is also dotted with water bodies such as beels, ponds and swamps — a total of around 3.73 lakh water bodies, covering an area of 2.85 lakh ha. However, the productivity per ha of water body is low, as only 5% of the area is under scientific fish cultivation.

While the current production of fish in Assam is 2.97 lakh metric ton (MT), the demand is 3.31 lakh MT, according to Fishery Sector at a glance, Assam, 2015-16. Thus, the state incurs a deficit of 93.15 MT per day, costing the state exchequer around Rs 1.15 crore. The deficit is met by imports from other states, mainly Andhra Pradesh and West Bengal, and sometimes from neighboring Bangladesh.

Presently, fish yield is less than 1 MT per ha through traditional rearing and about 2.2 MT under improved rearing. By training unemployed educated youth in improved rearing practices, the production can be increased. Given the availability of water bodies and high demand, there is an ample scope for developing fishery as an alternate means of livelihood in water bodies protected by embankments.

Centre for Microfinance and Livelihood (CML), a non-profit working in the Northeast, had identified the need for promoting producers who could provide relevant services to fish cultivators and supply good quality fry, fingerling and yearling — the three indicating the stages of the fishes’ growth. The best possible solution was to train local unemployed youth in production and supply of quality fish seed. This would also promote self-employment. The Mising Autonomous Council (MAC) along with CML, an initiative of Tata Trusts, started training unemployed local youth in fish seed production.

Pramod Doley, an educated youth in Gohainpukhuri of Lakhimpur district, was unemployed after having worked as a private taxi driver and on a short-term contractual work. Neither could provide him with a steady income and independence at work. Though the family was food sufficient, cash flow was a big concern. So he was exploring other avenues, as he had to support his family, including a widowed sister-in-law and two nephews.

After the demise of his elder brother, Pramod had to support the family and he started working in the agriculture field and rearing fishes. The family owns two ponds of 0.5 acre each but used to rear fish primarily for domestic consumption. He was not aware of improved cultivation practices. Hence, the net income from the total pond area was as low as Rs 5,000 per annum.

Pramod was identified as one of the community-based service providers for the fish farmers from 91 households with a command area of 10.61 ha. Pramod underwent training on the importance of fish seeds, their production, pond development, stocking, feed and pond management, harvest and sale. In a short span of time, Pramod proved himself as a good seed supplier and a sincere service provider in the cluster.

Doley visited Pabhoi Greens, a fish hatchery owned by Neelam Datta at Biswanath Chariali. After the visit, Doley realized that fish seed rearing in itself could be a self-sustainable livelihood option. Trainings and exposure visits were critical drives for him. “The exposure visit to Pabhoi farm boosted my confidence. I learned fundamental aspects of fish seed production,” Doley told VillageSquare.in. “Learning practically the preparation and application of organic manure, preparation of homemade feed, liming, netting, monitoring water quality, etc., helped me a lot.”

After the training and exposure program, Doley stocked one major carp namely, mrigal and two minor carps kuhi and bata in the first season. He stocked spawn of rohu in two ponds that he had taken on lease at Rs 4,000 per annum. In addition to selling yearlings to farmers in the Gohainpukhuri cluster, he sold to 65 farmers outside the local farmer producer group. From the net income of nearly Rs 3.18 lakh, he paid his partner’s investment and profit share, earning nearly Rs 2.78 lakh for himself. Apart from this, he earned Rs 26,000 by rearing table fish katla, rohu and mrigal.

It was a good journey for Doley at the end of the 9-month cycle. “It was the highest income in my life from fishery,” he told VillageSquare.in excitedly. After clearing the loans he had taken during his contractual work, he has taken two more ponds on lease, to expand his business. He has become an inspiration for other youth in taking up fishery as a self-employment opportunity.

In the current year, 10 more youth have been trained in the Gohainpukhuri cluster and provided with viable business plans. The challenges in this activity include receiving timely payment and competition from existing fish seed suppliers. To overcome challenges such as sale of output, the producers need to develop a good rapport and gain trust of farmers.

The experience of the youth shows that fish seed rearing could be a profitable business and provide self-employment. This would make a significant dent in the high rural unemployment that exists in the countryside of Assam. This model can be promoted in other blocks and districts by engaging more youth as per the demand. However proper grooming and handholding is an important prerequisite in promoting the model.

Abdul Mannan Choudhury is Program Head in Centre for Microfinance and Livelihood, Guwahati. A postgraduate in agriculture, he has over 15 years of experience in the development sector. Views are personal.

Abdul Mannan Choudhury is Program Head in Centre for Microfinance and Livelihood, Guwahati. A postgraduate in agriculture, he has over 15 years of experience in the development sector.