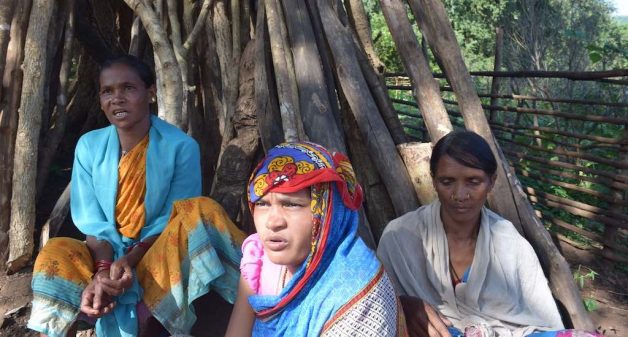 Kondh tribal women cannot imagine life without their forest that ensures their food and nutritional security. (Photo by Basudev Mahapatra)

Sunamai Mambalaka, a Kondh tribal woman in her 50s, is not bothered about the vulnerability of cultivated crops to climate change. She believes that she and her community will never experience hunger as long as the forest, their perennial source of food, exists. “I was born in the forest, I grew with the forest. Forest is our life and soul,” she said.

To the Kondh community living in Tada village of Rayagada district in Odisha, the forest adjacent to their village has remained the source of food, nutrition and livelihood since generations. Recent studies confirm that forests not only meet the nutritional needs of the communities, but also would play an important role in helping them face vagaries of nature and achieve some of the sustainable development goals.

“We are never short of food because the forest has plenty to offer us,” 40-year-old Kalia Mambalaka told VillageSquare.in. According to Padmavati Paleka of Leling Padar village, they get a variety of mushrooms, tender bamboo shoots, fruits like custard apple and several kinds of leaves and edible insects during the rainy season. 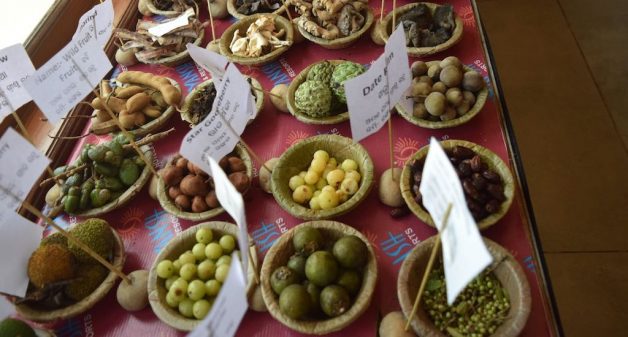 Food collected from the forest meets the nutritional needs of the Kondh tribes of Rayagada district. (Photo by Basudev Mahapatra)

“Honey and many tubers are harvested throughout the year,” Paleka told VillageSquare.in. While some tubers are harvested during winter, the food items specific to summer include leaves and fruits of mango, kendu, jackfruit, amla, bel and tamarind among others. Except rice, the staple food of Odisha, as 35-year-old Biswanath Sarakka puts it, “Three fourth of the rest of our food comes from the forests.”

The average daily intake of uncultivated forest food ranges between 12% and 24.4% of the total cooked foods, according to a study by Living farms that promotes agro-ecology as the foundation of food security and sovereignty. The study was carried out in Rayagada and Balangir districts, with predominant forest-dependent tribal population.

Conducted in collaboration with Basudha Biotechnology Laboratory for Conservation, the team of scientists led by ecologist and champion of traditional rice Debal Deb studied the link between the biodiversity and ecology of the forest to availability of food items. “This is the first time that we have studied the nutritional properties of available wild foods,” Deb told VillageSquare.in. “It’s not just about food security, but about nutrition as well.”

For example, edible leaves such as gandheri sag and ambgili sag available in the forest have very high content of pro-vitamin A (Beta Carotene), anti-oxidants and soluble protein. The research found that the leaves are rich in digestible iron, zinc and manganese as well. 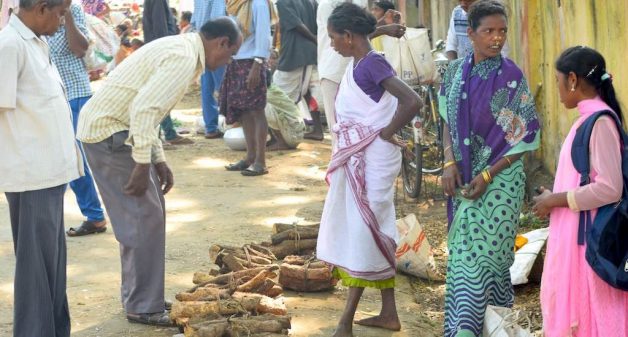 Tubers and forest food are in high demand in local markets. (Photo by Basudev Mahapatra)

Some of the tubers and mushrooms also have high iron, zinc, vitamins and anti-oxidant content that are vital for nutritional security. “We found that the households consuming about 20% of their cooked food from the forest have no signs of malnutrition,” Deb said, urging for further studies with quantification of data.

Being such storehouses of food with rich nutritional value makes forests critical for future food safety. According to Deb, the forest species are more resilient to climate change than any of the cultivated crops, thus assuring the villagers of nutritional security.

While mentioning that forests are fundamental for food security and improved livelihoods, State of the World’s Forests (SOFO) 2016 released by the Food and Agriculture Organization (FAO) notes, “The forests of the future will increase the resilience of communities by providing food, wood energy, shelter, fodder and fiber; generating income and employment to allow communities and societies to prosper; and harboring biodiversity.”

SOFO 2016 also highlights that, given their multi-functionality, forests can play significant roles in achieving about six of the Sustainable Development Goal (SDG) targets set by the UN. Such contributions are usually poorly reflected in national development and food security strategies. Coupled with poor coordination between stakeholder sectors, forests are mostly left out of policy decisions related to food security and nutrition, FAO observes.

Forest foods are in high demand in haats or tribal community markets and nearby rural markets. Forest produce such as honey, amla and several fruits are in great demand in urban malls. Though this may appear as an opportunity for economic empowerment of the tribal communities, this may lead to degradation of the forests, hampering availability. “When there’s greater density, diversity of tree species and basal area (total base area of trees in the forests), the availability of food, not only plants but also animals, is much higher,” Deb told VillageSquare.in.

The other threat is from commercial monoculture plantation on forestland under afforestation and social forestry programs. According to FAO, monoculture plantation totally affects the organic productivity and reduces the natural stability of the soil. “The forest department wanted to plant eucalyptus in our forest land. We didn’t allow,” 52-year-old Landi Sikoka of Khalpadar village told VillageSquare.in. “We plant trees of our choice in the forest periodically.”

“For the tribal communities, forest is not just a source of food, but it’s also a part of their identity,” Debjeet Sarangi of the Living Farms told VillageSquare.in. “Tribes such as the Kondhs’ way of life is respectful of others including nature and recognizes diversity in its different manifestations.” The tribal community’s relationship with the forest is one of belonging rather than ownership.

Community forest management is good for the health of the forests. When local users have long-term rights to harvest from the forests, they are more likely to monitor and sanction those who break the rules, resulting in better forest conditions, according to Nobel laureate economist, the late Elinor Ostrom, who advocated for common rights over land and forest.

The study conducted by Living Farms corroborates the theory. According to the study, ecosystem of the forest is likely to be much improved in terms of number of tree species, density and food availability, when managed by the communities. “Forest gives us food, fodder, firewood and everything we require,” Sunamai Mambalaka told VillageSquare.in. “It’s our god, our mother.”