Living in flood-prone areas of Assam with no alternate sustenance options, women of Mising tribal community have upgraded their traditional handloom weaving skills, and have adapted to market needs for a lucrative livelihood 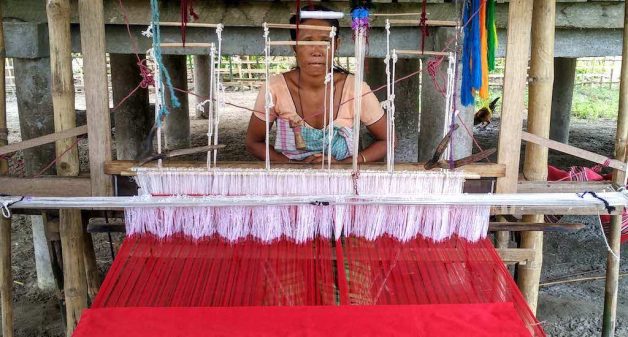 Mising is one of the indigenous tribal communities of Assam with a rich tradition of weaving. A Mising woman, despite being engaged in myriad household activities through the day, would spend some time on her loom everyday. The women make garments, mainly for everyday use, through handloom weaving. They also weave classy products for special occasions. Mising women would weave in advance, five to 10 sets of mekhela chador — a traditional women’s attire — to gift their daughters at the time of marriage.

In Assam, women feel proud to wear handloom products, especially mekhela chador, during special occasions like weddings and festivals like Bihu and Saraswati puja. Hence, the products are in great demand among people residing in Assam as well as outside the state. However, handloom weaving has not taken off as a thriving source of livelihood for various reasons. Using simple technology and adapting to market needs, the Mising women have now found the prospects of handloom weaving looking bright.

Mising villages are on the banks of the Brahmaputra River and its mighty tributaries. Every year the area faces devastating floods. The recurrent floods reduce the scope of alternate livelihood. Villages like Sisitangoni of Dhemaji district and Matmora of Lakhimpur district are affected by riverbank erosion or sand deposition, reducing any possibility of agrarian or land-based livelihoods. See: Riverbank erosion no less a disaster than Assam floods

The traditional throw shuttle loom is built under the stilt house, such houses being a traditional practice among the Misings to adapt to the floods. Using a tedious process that needs patience, the weavers produce wraps like mekhela chador and gero, stole like gamosa, besides some utilitarian items. Traditionally, weaving in Mising community was for their own use. But these days Mising handloom products are much in demand.

The demand of Mising handloom was beyond expectation in the handloom fair in 2014 when the total sale was for Rs 14 million over a period of five days. But due to low efficiency (weavers produce just two mekhela chador in a month) of traditional looms and limited product diversity, the weavers’ remuneration is low. As a result, handloom weaving is not seen as a viable livelihood.

However, dovetailing modern technology with the traditional skill of the weavers, handloom can provide a lucrative livelihood opportunity for the families of the area. With the objective of bridging the demand and supply gap, and making handloom weaving a sustainable livelihood, Mising Autonomous Council (MAC) and the Center for Microfinance and Livelihood (CML) with the Tata Trusts planned an intervention to be executed over three years.

The team decided to introduce technology to overcome the low production efficiency. As a first step, a warping drum was introduced for getting a defect-free warp. Unlike the traditional method, warping drum helped reduce the area required to make a warp. 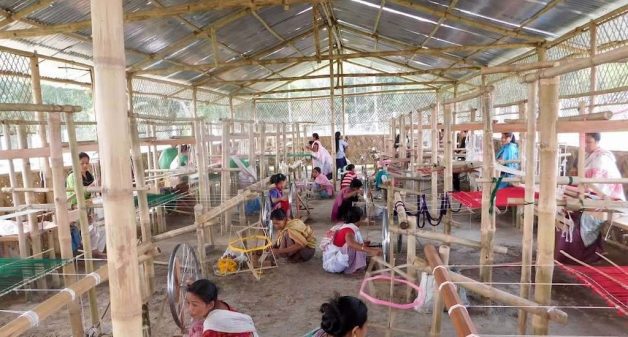 In batches of 25, the weavers underwent a 60-day skill training, overcoming resistance from the men at home, giving up their contribution to the livelihood and running of the family. During the training, they learnt to take the warp in a warping drum, practice in the fly shuttle loom, develop designs, diversify products and also maintain records. In 18 months, 375 members have completed their training.

On completion of training, each weaver received a fly shuttle loom. With the prospects appearing good, the weavers provided bamboo and labor for construction of a 100 sq. ft weaving shed in their homes where floods would not damage them. “Earlier I couldn’t take warp during rains as it required a large open ground but today with the warping drum I can take warp in a single room,” Runa Doley of Matmora village told VillageSquare.in.

The training and practice in the new loom has increased the production efficiency up to a maximum of 250%. “Now I produce four mekhela chador in a month, when earlier I could make only one or two,” Anima Taye of Sisitangoni village told VillageSquare.in.

The introduction of technology has not only improved production speed but also reduced the drudgery for the weavers. “Earlier I had to bend after every weft to throw the shuttle and I couldn’t sleep at night because of the back pain. But now I weave at triple the usual speed without bending and without pain,” Purnima Kaman told VillageSquare.in.

Weaving for the market

The women took a while to consider that handloom weaving could be taken up commercially and to deliver orders on time. Exposure through handloom exhibitions and community-led commercial enterprises has instilled in the weavers the need to complete orders on time and to move beyond the traditional use of yarn, color combination and design to suit market requirement. “Till two months back I wove only what my mother taught. Now I know warp measurement for different products and can weave any design developed in a graph paper,” said Doley. 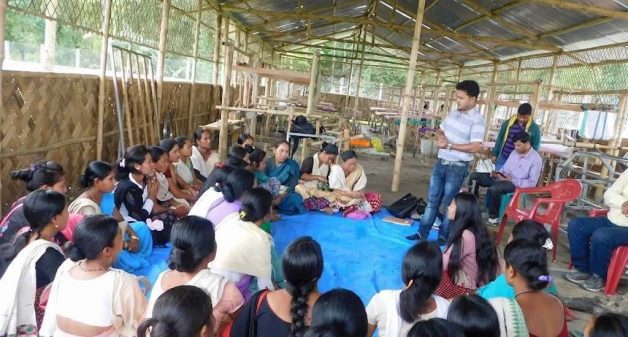 Besides the traditional wraps, now the women weave shawl, stole, table cloth, curtain, fabric for shirt, kurta etc. in diverse design and combination of colors. As a result, the range of buyers for their product has increased in comparison to earlier days, with the sale almost doubling in a month. “It was painful to weave a mekhela chador for a month and get just Rs 1,200 in return. Now I will earn more,” Doley told VillageSquare.in.

The women came together as informal producer groups (PG). With the PG periodically purchasing yarn, the women avail of their working capital in the form of yarn at a minimal rate of interest. The weavers are free to sell the products on their own or through a company promoted by CML.

Out of the women who got trained, 200 weavers have already constructed their shed and started production in their new loom, with the working capital provided for about 3kg of yarn. The weavers have formed three PGs with 150 members in each. The PGs undertake collective direct selling to a few customers.

Timely marketing of the products and regular cash flow to the weavers is now a challenge. So the marketing channel will have to be strengthened and more organized. The nascent initiative shows that handloom weaving could change the lives of the Mising population in the flood-prone riverine area for better. There is a need for the state also to step in and to scale up the initiative.

Abdul Hamid works for Centre for Microfinance and Livelihood as Senior Program Manager. He worked with Professional Assistance for Development Action (PRADAN) for many years after graduating from Assam Agricultural University. Views are personal.

Abdul Hamid works for Centre for Microfinance and Livelihood as Senior Program Manager. He worked with Professional Assistance for Development Action (PRADAN) for many years after graduating from Assam Agricultural University.