Stepping into the exclusive male preserve of masonry, Damayanti Patra of rural Ganjam has shown exemplary determination to overcome personal tragedy and natural disaster to secure a sustainable vocation 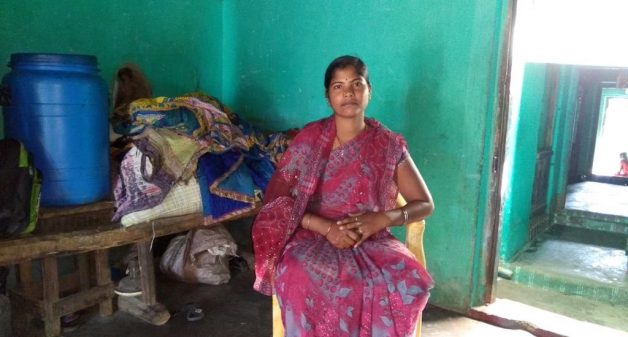 Damayanti Patra has made a mark as a mason in rural Odisha. (Photo by Gram Vikas)

Damayanti Patra stands out at a construction site. She is a mason, and it is not common to come across a woman mason in rural Odisha, or for that matter, anywhere else in the country. Patra was eking out a living as a laborer when Cyclone Phailin struck in 2013. The silver lining behind the disaster is her present vocation that has boosted her socio-economic standing.

Hailing from G. Gandapalli village of Khallikote block in Ganjam district, she was married when she was 14 years old. Married young and widowed young, she struggled to bring up her two small children. With discord in her marital home, she moved back to her parental home. The financial situation was no better in her parents’ home and she has to work as a laborer in agricultural fields or elsewhere for a meager wage of around Rs 150 per day.

In 2013, Cyclone Phailin struck another blow to Patra’s never-ending financial crises. The cyclone devastated Odisha, particularly the districts of Ganjam, Puri and Khurda. The loss of lives was limited, but the devastation was huge. Crops in over 780,000 hectares of land were destroyed. The estimated damage was about Rs 3,000 crore. In Ganjam district alone, about 90,000 houses were damaged. Patra’s parental house was one of them.

The Odisha Disaster Recovery Project (ODRP), a government of Odisha initiative supported by the World Bank, with the help of Gram Vikas, an NGO that works among rural communities, started rehabilitation work in the cyclone-hit areas. ODRP provided housing facilities as well as infrastructure facilities. Under ODRP, as many as 16,000 houses were constructed to replace severely damaged homes. Patra’s father was one of the beneficiaries of the housing project. The family was allotted Rs 3 lakh, to be paid in six installments.

ODRP being a huge construction project had a massive requirement of land, raw materials, and most importantly, skilled workers — trained masons specifically. Puri and Khurda, the other cyclone-hit areas, had enough skilled masons, but not Ganjam district.

Finding skilled masons in Ganjam was one of the main challenges during the housing project. The implementing agencies decided to train local people in construction skills such as masonry and plumbing and involve them in construction. The training was also expected increase their employability in the competitive market after the reconstruction work was over.

Patra heard about the training program and enrolled herself. She received a stipend of Rs 200 per day during the training period of 60 days. She used the stipend money for her children’s education.

Building with her hands

The main motto of the masons’ training program was to make the trainees self-sufficient so that they could construct their house without the help of a contractor, thus saving on the cost. For Patra, it was the time to translate her talent and training into work.

With her father, the beneficiary, being old, Patra did all the work from visiting the bank to constructing the house. Being a single mother, it was tough to handle all the work singlehandedly. She sought the help of fellow villagers, but they had also been badly hurt by the cyclone and were constructing or mending their own houses. 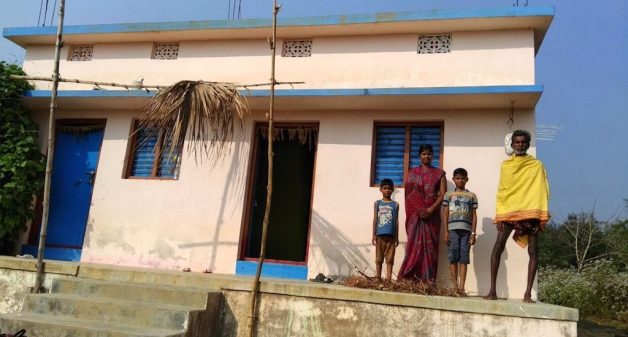 Damayanti Patra with her sons and father in front the house she built after Cyclone Phailin. (Photo by Gram Vikas)

After two years of working on her house and completing it, Patra wondered, “what next?” The contractors refused to accept her as a mason in spite of her training and experience of building her house. Contractors did not allow her to work as a mason in their construction projects, as they thought that she lacked practical knowledge.

Determinedly, Patra worked as a junior laborer to gain practical knowledge and experience about construction work. After she gained sufficient experience, the contractors allowed her to work as a mason. “It took time for the community to accept me and have confidence in me as a mason. They were convinced after seeing my work and thought I could be mason instead of a helper,” Patra told VillageSquare.in. “I’m happy that my belief that people would someday accept me has come true.”

She constructed many houses during the ODRP housing project and everyone was happy with her work. She now earns Rs 400 a day as a mason, which is nearly three times what she earned as a laborer earlier. She travels to nearby villages also to work in construction sites. With confidence she said, “Mason training has changed my life. I have started dreaming of a brighter and better future for my children.”

Subhashree Sahoo is a development professional. Views are personal.

Subhashree Sahoo is a development professional. Views are personal.