The simple act of cooking takes on a difficult dimension due to lack of easy access to fuel and water, forcing women in rural India to walk long distances to get them, increasing drudgery and leading to health hazards that call for immediate action 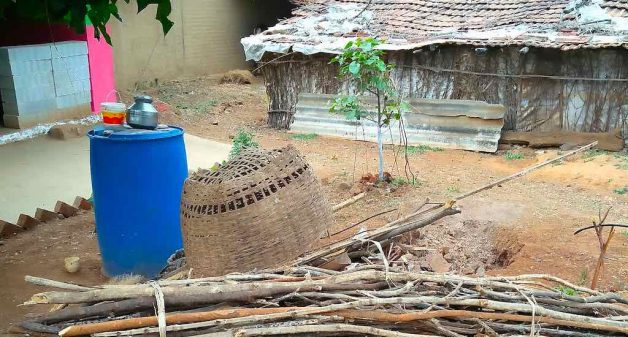 She wakes up at 5am when it is still dark and the rest of the family is asleep. She walks 4 km to reach a hillock and starts gathering firewood. By daybreak, she is back and starts cooking for the family. What about water for cooking? That involves another trek.

She represents most women in Bubli, a tribal village in Surgana taluk of Nashik district, where most of the households do not have cooking gas connection. The trek for firewood and water is repeated every day of the year. Prolonged bending, carrying excessive loads, improper postures, and limited time for rest have a telling effect on the health of the women.

Food is central to human life, but should life be consumed by the simple act of cooking? We often take fuel and water for granted. But not everyone is privileged to have easy access to these basic necessities. There are pockets in India where women have to work hard for hours to gather water and firewood. There is huge amount of labor by rural women around the simple task of cooking that is never quantified.

The bundle of firewood that a woman carries back home weighs between 8kg and 10kg. The quantity and weight depends on size of the family. If the family owns cattle, the woman’s load is reduced a bit, as dried cow dung would be used to fire the stove.

After returning, she prepares food and washes the utensils, exhausting the stored water. She goes out again to fetch water. The trip depends on the season, and number of family members and animals in the house. If she is lucky and if there is a hand pump nearby, the number of trips she makes to fetch water would be limited to about six.

In summer, the distance she walks, as well as the number of trips increases as hand pumps dry up, but people and animals consume more water. If she is healthy, she will carry two pots in a single trip, thus reducing the number of trips. The water needed for preparing food, drinking, washing utensils and other domestic needs is brought thus. 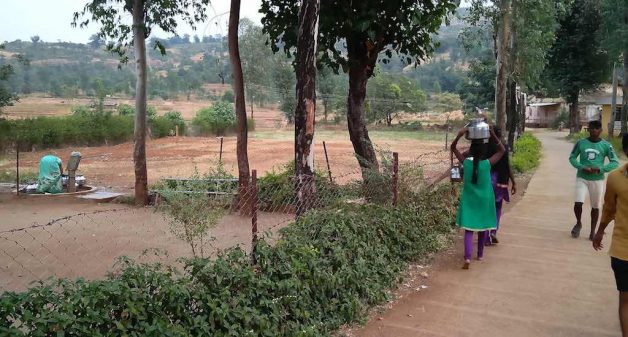 As per BIS 1172: 1993, prepared by the Bureau of Indian Standards, the minimum water need for a person in a rural household without a flush toilet is 40 liters per day. Even if a family decides to use minimum water, the woman needs to fetch 200 liters of water per day for the entire family. Everyday she spends two to four hours to fetch water. Sometimes, young children help to their capacities to ease the mother’s burden.

Bubli has a well. Away from the village and in the premises of the resident tribal school in the village, the well is the last water resource to dry up. When water in the well dries up, the villagers pool in money to fetch water in tankers. Tankers sent by the district administration rarely show up.

There is another aspect to this enormous physical burden, other than just missed opportunity for developmental activities. This strenuous and prolonged work takes a toll on the women’s health. Most often men migrate to urban areas for work and the women are forced to work hard to attend to all the needs of the family.

As age advances women start suffering from various health issues, leading at times to disabling effects of these chronic illnesses. Their health related quality of life is grossly compromised. These women have very high prevalence of genital, spinal and musculoskeletal problems.

Spinal and musculo-skeletal problems are also issues that are not dealt with properly. Health issues are more prevalent among rural women who carry strenuous domestic work repeatedly. Disc prolapse at lower back and neck, sciatica or compression of sciatic nerve that goes from lower back to back of the thigh, pain in knee joints and shoulder problems are some of the common complaints. If neglected, these could lead to disabilities.

Among the older generation, it is common to see a few women who are partially or completely disabled. Women said they cope with the suffering by using a chewable form of tobacco. Going to urban clinics, getting investigations and physiotherapy done are too mind-boggling and costly for them. They are not aware about the government’s health insurance. They are not vocal and strong enough to cross the barrier of red tape.

Lack of access to cooking fuel, water and health care appear to be reason for the health problems of these women. As per the 2011-12 report on Household consumption of various good and services provided by National Sample Survey Office (NSSO), only 21% rural families have LPG connection as opposed to 71% of urban families. Though the situation has improved after the introduction of Pradhan Mantri Ujjwala Yojana (PMUJ), many are yet to enjoy the benefits of the scheme.

Women of Bubli have been waiting for LPG for two years, since the documentation and related payments were completed long back. They do not expect piped water supply in the near future. These distant, rural and tribal communities appear to be voiceless or less of an entity to create political pressure. The village council chief of Bubli is no exception, and does these laborious jobs by herself.

We cannot expect these remote rural societies to make room for developmental and creative activities, in the absence of time and energy, caught up as they are in their routine domestic work. In a democracy where we emphasize on inclusive growth, there is no system to reach out to these people and mainstream them. But it is high time the government, institutions and civil society looked into the problem and addressed the health hazards faced by women due to lack of fuel and water.

Abhijeet Jadhav works with Center for Development Research in Pune. He was earlier faculty at Tata Institute of Social Sciences, Mumbai. Views are personal.