Even as a digital revolution sweeps across India, people in the more impoverished and remote parts of the country have to struggle to bridge the digital divide and a level playing field is still a distant dream 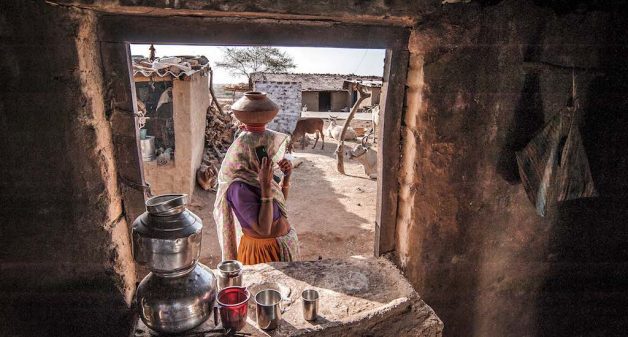 Mobile connectivity is still poor in the poorer parts of the country. (Photo by Ramesh Soni)

We were proceeding from the office of the Block Development Office on the road that leads to Kashipur in Odisha. We were in the habitations of the tiny Thuamul Rampur town. A bright blue board prominently fixed by the road showed the way to a “Hello Point.” What is that? I was told that that path led to the small area where you could receive the signal for mobile telephones.

This is one of the blocks of the Kalahandi district. The entire block has no petrol pump. “You know the principal claim to fame of Kalahandi was the starvation deaths in the eighties? The senior administration officers used to take visitors from donors to this block so that they could showcase poverty of Odisha for getting more development assistance,” a young man who hails from the district told me. I have no independent way of verifying the truth of that statement.

There are poles and wires to indicate that the block has been electrified. Perhaps the block headquarter is but a majority of villages give the appearance of living in the 19th century. Karlapat Wildlife Sanctuary is in this block. The hinterland is well wooded, some places thickly forested. Elephants live here along with perhaps a range of other fauna.

As we start from the district headquarter at Bhawanipatna, the main road makes a promising start. It is nicely metaled and has modern looking cat’s eyes to warn drivers. Somewhere on the way, the road sort of gives way to mud tracks with numerous diversions. We were travelling in winter and the road threw up dust but perhaps in monsoons it may not be easy to traverse. The roads to villages from the block town are definitely worse. And several villages have no roads whatever.

The poverty of the people, whether still being showcased or otherwise, is palpable. A colleague told me that this region was mercifully free of any disadvantages of demonetization. He said, “To feel sorry that Rs 500 and Rs 1000 would not work and must be exchanged, one had to possess them. So few people had them here. So they were not affected at all. It would be a different story if Rs 20 or Rs 50 notes were demonetized!”

Falciparum Malaria is the major menace and killer here as in other places in the Odisha Eastern Ghats. With a large measure of poverty, mosquitoes, deep jungle and elephants, Maoist insurgents are not far behind. The region is indeed among the more intensely dominated by the Maoists than other parts of the state.

A branch of the local Regional Rural Bank at Gunpur and another of the State Bank of India at Thuamal Rampur represent the awful majesty of the formal institutional financial world here. Some of their staff lives on the site, some come from Bhawanipatna. For any villager travelling to the bank for any transaction is a major program, taking one whole day if not more.

A mix of Kondha, Paraja, Gond, other tribes and some dalit communities live in this area. There is a fair degree of migration, particularly of the young men, from this block. They go all the way down to Kerala and work in restaurants, stone crossers, brick kilns, etc., to earn a living. Some of them have acquired smartphones.

So when one goes to the with someone having a smartphone to the Hello Point and when the mobile data network is functioning, then the people can perhaps enjoy the formidable privileges of digital inclusion. Literacy is commensurate with the level of poverty here. Surely very few people know how to read and write in English. How would they transact digitally with sites which are largely in English is any one’s guess.

One thing is for sure. The nature here is very pretty — high hill ranges in the distance, rolling woods, intensely green trees, blue sky, air so pure that a city dweller can feel nothing but bliss. Elephants, absence of electricity and difficult road make every day chores a thrilling experience. As people struggle in their old analog ways to live, the new Digital Revolution sweeps the country. The fields and landscape here is certainly not level and nor will the playing field between tiny malnourished children here and their brothers in the cities.

The question as to whether Thuamal Rampur is a living analog mockery of the concept of digital inclusion perhaps immediately brings the retort: “But you are picking the worst conditions. Surely it will take time for the change to reach this place.” But how remarkable is the place anyway?

As you traverse the hinterlands, a large number of villages may not have the romance of elephants but surely their physical connectivity is not of a different order, there are issues in electricity and data network connectivity, banking institutions are few and far in between and familiarity with English to transact business in the digitally enabled world is poor.

Doing nothing while simply mooning over the tough constraints and awful ground situation is tantamount to foolish and inept governance, which we saw for decades. It did help all the wrong people — contractors, touts, middlemen and corrupt bureaucrats. This has to change. Yet the picture of places like Thuamal Rampur does raise the question whether there is undue haste in promoting IT-enabled governance when its analog versions themselves are so broken.