Recurring droughts have reduced the annual income of Ramvithal Valse, a farmer from Sonwati villlage in Latur district of Maharashtra, by 80% in the past 6-7 years. (Photo by Nidhi Jamwal)

The Indian government is leaving no stone unturned to fight the occurrence of drought in the country. The Manual for Drought Management, released in December 2016 by the Union Ministry of Agriculture and Farmers Welfare, prescribes “new scientific indices and parameters” for a “more accurate assessment of drought” in the country.

The five categories of indices listed in the new manual, which include rainfall, agriculture, soil moisture, hydrology, and remote sensing (health of crops), are expected to help the state governments make scientific assessment of drought rather than “rely on the traditional practice such as annewari / paisewari / girdawari system of eye estimation and crop cutting experiments”.

However, representatives of farmers’ groups and agriculture sector experts say that strict parameters for drought declaration in the new manual will make things worse for the farmers, especially in drought-prone areas of the country. In Maharashtra’s Vidarbha and Marathwada regions, which are infamous for farmer suicides and consecutive droughts, implementation of the new drought manual may act as the last nail in the coffin of the farmers, who are already taking their own lives due to repeated crop failure, indebtedness and other factors.

Droughts will be underreported

“At the outset, the new manual acknowledges that drought has complex nature and varying characteristics that manifest across different agro-climatic regions in different ways. But, it then goes on to prescribe very strict indices for declaration of drought across six climatic zones in the country,” K J Joy, senior fellow with Pune-based Society for Promoting Participative Ecosystem Management (SOPPECOM) told VillageSquare.in. “If the new manual is followed, then several droughts in the country will go unreported.” 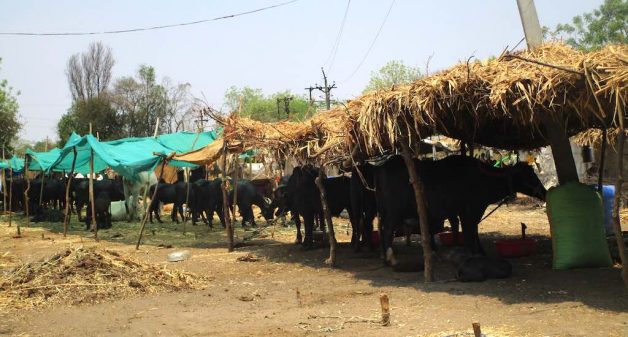 During acute drought, cattle camps are set up to provide fodder and water. (Photo by Nidhi Jamwal)

But, officially these 9,000 villages are not drought-affected because last October the state government issued a Government Resolution (GR) in line with the Centre’s new drought manual, and adopted new indices to declare drought in the state.

As per a recent news report, over 136 talukas or administrative blocks had approached the state government to be declared drought hit, but only three talukas from Gondia district have made it to the category of moderate drought under the new criteria prescribed in the manual.

Moderate drought is no longer eligible for relief funds from the Centre. The 2016 manual makes it clear that only if the calamity is of “severe nature” can the state governments submit a memorandum for financial assistance under the National Disaster Response Fund (NDRF). For mild and moderate droughts, the states have to shell out their own funds.

“Rather than finding ways of managing and mitigating droughts, the Indian government seems keen to not identify the droughts. The Centre has conveniently pushed the burden of drought relief on the state governments,” Vijay Jawandhia, a farm activist from Vidarbha, told VillageSquare.in. He is also the founder member of Shetkari Sanghatana and president of the Kisan Co-ordination Committee. “The new drought manual is a mockery of the farmers. It is a clear message from the government that farmers have to fend for themselves.”

Meanwhile, the India Meteorological Department (IMD) has expunged the word drought from its vocabulary “to do away with or re-define terms that are not scientifically precise”. Instead of using terms like ‘All India Drought Year’ or ‘All India Severe Drought Year’, the IMD has adopted ‘deficient’ year or ‘large deficient’ year, news reports say.

So far, the states had been following their own system of drought assessment and drought declaration. According to the new manual, for a drought to fall under the severe category and be eligible for central assistance, the state government has to prove severity in three out of the four main impact indicators.

The 2016 drought manual is an offshoot of the November 2009 Manual for Drought Management of the central farm ministry. The drought indicators included in the 2016 manual were also part of the 2009 manual. But they were more like guidelines than mandatory parameters.

The biggest difference between the 2009 and 2016 manuals is financial assistance for drought relief. The 2009 manual had two streams of financing relief expenditure — Calamity Relief Funds (CRF) and National Calamity Contingency Fund (NCCF).

The CRF envisaged the contribution of Central and the concerned state governments in the ratio of 3:1 for a fund to be kept outside the government account so that there was no cash flow constraint for initiating relief operations. The NCCF provided funds for natural calamities of severe nature when the balances available in the CRF were not adequate for meeting relief expenditures. The Ministry of Finance released assistance from both the CRF and NCCF.

In sharp contrast, in the 2016 manual, the Central government has washed its hands off drought relief. “A Memorandum for assistance under the National Disaster Response Fund (NDRF) will be submitted within a week of the declaration of drought only if the calamity is of a severe nature,” reads the new manual.

“The indices for declaring severe drought are so strict that such droughts will occur only once in 10-15 years. Thus, the Centre won’t have to release any drought relief funds,” Mohan Gojamgunde, an agricultural officer at Latur, told VillageSquare.in. “The states will continue to struggle with recurring droughts — mild and moderate — and the plight of farmers will increase manifold.”

“It is no secret that the changing climate and vagaries of nature are increasing incidence of droughts. Farmers and agriculture sector needs additional support from the government. But, the Centre is conveniently transferring its responsibilities to the states, which is a shame, and must be challenged,” said Jawandhia.

Apart from the financial issues, there are indicator and parameter related problems with the new drought manual. Unlike the 2009 drought manual, the new manual does not take note of different types of droughts —- meteorological (deficiency of precipitation), hydrological (deficiencies in surface and subsurface water supplies), and agricultural (inadequate soil moisture leading to crop stress) droughts.

Maharashtra has experienced such a situation during the southwest monsoon of 2015 and 2017. Unless this point is understood, farmers will continue to suffer even if seasonal rainfall is normal, warned Deoras.

Joy raises strong objections to the parameter of sown area used in the new drought manual. “The manual says that only if less than 50% area is sown can it be an indicator of drought. This is far removed from the field reality,” he told VillageSquare.in. “Crop sown area cannot be taken as a measure of drought. Farmers tend to sow the crops in hope that rains will come. They even undertake second to third time sowing as they are desperate to have a good crop.”

Jawandhia informed that last year he had to re-sow cotton on his farm because of delay in the monsoon rains. And he was not alone. As per news reports, over 2.3 million hectares of farmland in the state faced the threat of re-sowing last year.

Meteorologists also point out problem with the definition of a dry spell in the 2016 manual. “The manual rigidly defines dry spells assuming its impact on agriculture would be similar everywhere and in all time scales. This is not true,” said Deoras. Factors like type of soil, type of crop, temperatures and vegetative state equally matter. Hence, even a dry spell of two weeks with above normal temperatures can hamper the crop growth and cause irreversible crop damage, he warned.

Crop productivity is an important factor, but is missing from the manual. “Soil moisture categories are too rigid. A 25 percent soil moisture in semi-arid area of Marathwada will not have the same impacts as 25 percent soil moisture in heavy rainfall area like Konkan,” said Joy. “There is no mention of water equity in the drought manual. It fails to note that almost 80% of the irrigation water in Maharashtra is used by water-intensive sugarcane crops. Such crops and water inequity is one of the reasons for droughts in Maharashtra.”

Dushkaal he aasmani nasoon, sultani aahe is a famous Marathi saying, which means that drought does not happen due to lack of rains, but due to poor governance. It fits well in the context of the new drought manual, which will further push farmers to the brink.