Marginalized and landless, Musahars have become free from bonded labor, yet continue to suffer social discrimination and financial hardships, hoping for government schemes to deliver 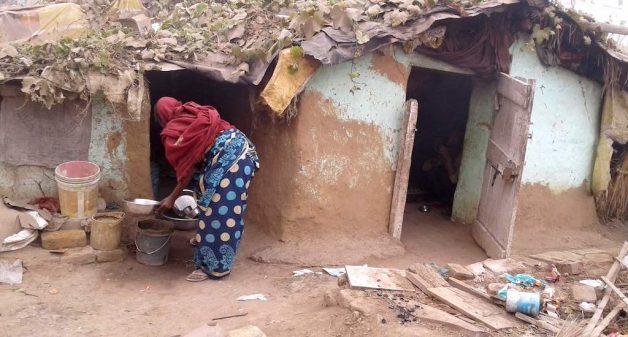 Mosaddi, a Musahar living in Lalpur’s Musahari, a small hamlet under Siriawan panchayat in Mohanpur administrative block of Gaya district, is not alone. His simple story reflects the lives of over 2.5 million Musahars in hamlets spread across drought-prone central and south Bihar and flood-prone north Bihar.

Amid repeated claims by the administration, of development and change, Mosaddi, in his mid-50s, lives with his wife and six children in a thatched hut built on gair-majarua (government-unclaimed) land because none of his forefathers owned land. The same applies for all Musahars, barring a few exceptions.

The landless Dalits, derogatorily known as rat eaters, are one of India’s most marginalized communities. Upper caste Hindus still consider them as untouchables. The Musahars consider being landless agricultural laborers as their fate and identity; they do not see their socioeconomic status changing in the near future.

In Bihar, 96.3% of Musahars are landless and 92.5% work as farm laborers. The figures have not changed much since the 1980s. Literacy is 9.8%, the lowest among Dalits in the country. Hardly 1% of Musahar women are literate.

There are 25 Musahar families in Lalpur and hundreds in other hamlets in this remote and underdeveloped pocket of Gaya, dominated by Maoist insurgents till recent times. Though Mohanpur block is about 20km from Bodh Gaya, the well-known Buddhist shrine, and connected by rough concrete roads, it is a different world. Most residents belong to backward castes, particularly Yadav and Mahadalit communities like Musahars.

Musahars live for decades in mud huts that are more like makeshift tenements. (Photo by Mohd Imran Khan)

For Musahars like Manjhi, life still revolves around food, and hence the search for work to earn a livelihood. He feels that this trend would continue for generations. “Only difference is that I earn double what my father earned as a daily wage farm laborer,” Mosaddi told VillageSquare.in.

Sudha Verghese, a recipient of Padma Award who has been working among Musahars, said that there has been no change in their living conditions in the last 40 years. “Even their livelihood income as agriculture laborer has been facing uncertainty due to use of farm machines,” she told VillageSquare.in.

Mosaddi revealed that his grandfather was a bonded laborer. Two decades ago, Musahars used to work as bonded laborers for rich landlords and moneylenders. The landlords had allowed some to settle in their barren lands outside the village so as to engage them as farm laborers.

“No doubt they have become free of bonded labor, but there may be a few still,” said Manoj Manjhi, an educated Musahar, who closely works with his community in Bihar, told VillageSquare.in.

“My grandfather was a bonded laborer like most Musahars of his time,” said Ramjit Manjhi of Rajaundhi village. He fears that his five children would also be landless laborers.

Mosaddi, clad in a lungi and shirt, is happy that unlike his forebears, his generation has clothes and do not go without food. But he had been without work for many days due to the cold wave sweeping the state.

Mukesh Manjhi, in his early 30s, moved from Noorichak village in Patna district to neighboring Uttar Pradesh, where he works in a brick kiln. Speaking to VillageSquare.in, Mukesh said majority of the 3,000-odd Musahars in his village were forced to migrate for nearly eight months a year as there was no demand for agricultural laborers.

Manoj said that 80% Musahars migrate to other states. “Most migrate with their family to work in brick kilns, construction sites and factories,” he said. The remaining, mostly women, children and the elderly work as farm laborers and rear pigs and goats.

Mosaddi and Ramjit, both in their 50s, said that they no longer migrate for work. “Only old people like me stay back in the village,” Suresh Manjhi told VillageSquare.in.

Asharfi Sada, president of Musahar Vikas Manch that works in the northern districts of Bihar, pointed out that Musahars no longer starve like they used to, since they earn a reasonable income after migrating.

According to Manoj, migration for survival deprives them of the benefits of several welfare schemes of the central and state governments. “We try to give work under Mahatma Gandhi National Rural Employment Guarantee Act (MGNREGA) to those who did not migrate,” Shoaib Akhtar, panchayat rozgar sewak of Siriawan told VillageSquare.in.

Verghese says that government’s welfare schemes hardly reach them. “That’s because we are illiterate and are not aware,” said Sarju Manjhi of Kolhaura that is hardly 2km from the Bodh Gaya shrine. Many drop out of school.

A group of children playing said that they did not attend school since they were discriminated against. “For them, we are unclean because we eat rats, rear pigs and live in a poor environment,” Bhola Manjhi, one of the children, told VillageSquare.in. 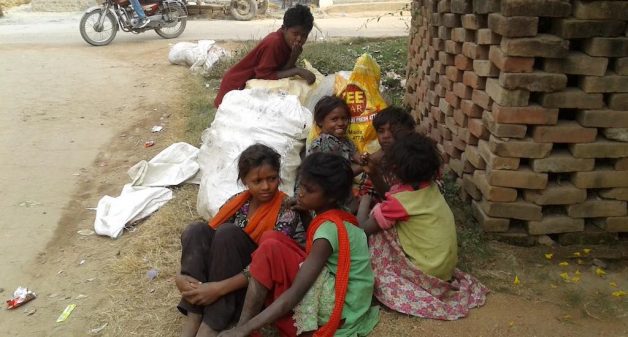 Children do not attend school due to discriminatory treatment meted out to them. (Photo by Mohd Imran Khan)

Sada said the community has no access to health facilities. There are no primary health centers near their settlements. He pointed out that Musahar children are easy victims of malnutrition, kala-azar and encephalitis. “It’s common to find parents who have lost their children.”

According to Manoj, in 2009, the state government promised 3 decimal (1,307 sq. ft) land to landless Mahadalits including Musahars, but not implemented till date. Musahars are the only ones who do not benefit from the old age pension scheme, as hardly few survive till 60.

However, Bihar’s Scheduled Caste and Scheduled Tribe Welfare Department minister Ramesh Rishidev said Musahars have been empowered by several schemes since more than a decade. “Our government has been trying its best to empower Musahars. It’s visible; their life condition has improved,” he told VillageSquare.in.

Philip Manthara of Manthan, an organization working among Musahars, said that they should be provided equal opportunity to improve their status. “Children’s education is the need of the hour.” Anto Joseph, director of Bihar Dalit Vikas Samiti concurred that they needed a special education program.

According to Joseph, unlike other marginalized communities, Musahars’ economic empowerment does not have an easy solution. “It’s an irony that an agrarian community dependent on an agrarian economy is landless,” he told VillageSquare.in. Joseph, Manoj and Verghese suggest giving them agricultural land to empower them economically.

Vijay Prakash, a retired bureaucrat, who has worked among them, said that the government should certify them as skilled laborers considering their agricultural skills. Manoj is hopeful that the situation would improve when the much-awaited land reforms come into effect.

Sunil Ray, director of Patna-based A N Sinha Institute of Social Studies, said they have to be brought to the mainstream. “Their marginalization will continue if no attempt is made to eradicate the victimization that has continued for generations,” Ray told VillageSquare.in. “Society has to create space for them to lead a dignified life.”