Although Gujarat was declared open defecation free in October 2017 based on the number of toilets constructed as part of the Swachh Bharat mission, the ground reality is different in the rural areas of the state 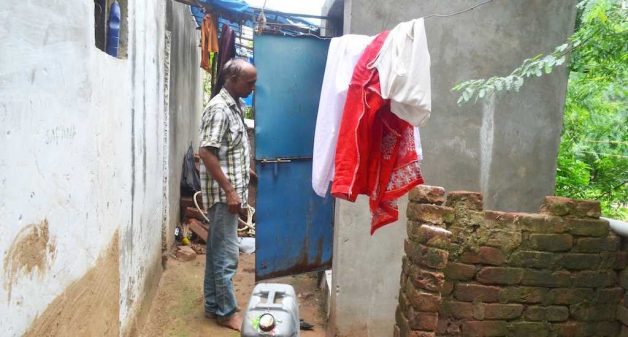 Many men in Kuha village defecate in the open in spite of having a toilet at home. (Photo by Gajanan Khergamker)

“We want to leave Gujarat and join Dadra and Nagar Haveli,” says Meghwad village chief Lahanubhai Diwadbhai Mhadha. For years now, Meghwad, also known as Maghval, has been facing innumerable issues of access to other towns, hospital, electricity and toilets, according to Mhadha.

In south Gujarat, Meghwad in Kaprada block of Valsad district is a case in point that risks thwarting the Gujarat model and particularly its claims of being open defecation free (ODF). Meghwad, though under the administrative purview of Gujarat, lies in the union territory of Dadra and Nagar Haveli (DNH), outside the state boundary and a few kilometers from DNH capital Silvassa.

The village chief rattles off the letters of complaint he has written over the years to state authorities in Kaprada, the administrative block, to those in the state capital of Gandhinagar, but to no avail. Hence he expressed a desire to join DNH.

The quaint village with 2,160 villagers is a rich landscape with the Daman Ganga River cutting through it, leaving a hilly stretch on one side and plain lands on the other. But toilets? Not every household has one.

When Silvassa resident Mamta Patel got married to Arvind Patel of Meghwad in 2011 and arrived at the village, she was shocked. There was no toilet in her marital home. “After years of living in my maternal home that has a toilet, it was very difficult for me,” Mamta told VillageSquare.in. Now her five-year-old daughter Trisha faces the same problem. “My parents-in-law do not mind defecating in the open, but I find it very difficult having to go so far each time.”

According to Swachh Bharat Mission (SBM), a whopping 61 million toilets have been built since 2 October, 2014 when Prime Minister Narendra Modi launched SBM to achieve Mahatma Gandhi’s vision of a clean India. SBM aims to make India clean by 2019 and pay the perfect tribute to Gandhi on his 150th birth anniversary. Going by statistics, with the nation registering a surge in total household toilet coverage from 38.70% in October 2014 to 75.63% by January 2018, India seems set to meet the target.

In all, as official figures state, 3,05,593 villages and 10 states across India have been declared ODF. Adducing complete credibility to statistics could thwart reality. The construction of toilets to facilitate defecation may serve the purpose in urban India where civic laws can penalize; the same even monitored by a robust opposition and a vigil media.

In cities, in the absence of toilets, people relieve themselves in the open. This is despite the law against open defecation being in place for years. There was literally no alternative.

Now, with the focus on construction of more toilets and stringent measures against open defecation, the problem appears to have been mitigated. Developmental works, surge in commercialization in urban India and effective implementation of open defecation laws have helped abate the problem. 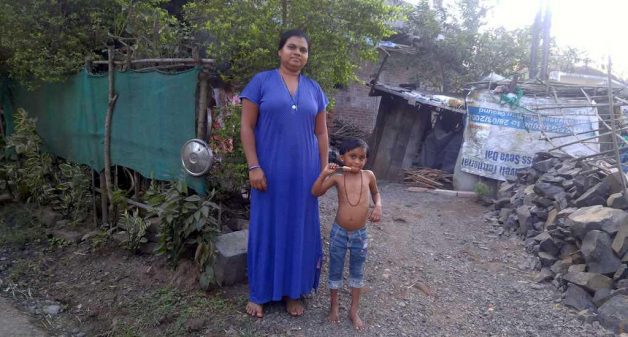 Some Meghwad residents do not have a toilet in the house and have no option but to defecate in the open. (Photo by Gajanan Khergamker)

However, where rural India is concerned, the statistics risk being relegated to mere numbers. Where reality is spurred by culture, traditions and habit more than laws or sensibilities, change is hard to come by.

In 2015, Ahmedabad, while combating the issue of open defecation, turned the pay-and-use toilet concept around to pay people for using the toilets and registered marginal success by converting public avarice into public good. Kuha village that lies 25 km east of Ahmedabad struggles to keep pace with the progress in the urban center.

While Kuha, with a population of over 10,102, according to the 2011 Census, was declared an ODF village, the ground reality is starkly different. Ignoring it will be perilous as – symbolic of a 69% rural India – it risks thwarting the entire Swachh Bharat Mission.

The ODF guidelines provided by the Government of India list the stringent process before a village can be declared ODF. The guidelines advocate continual engagement with ODF villages by the district administration or the SBM implementation machinery for at least nine months after declaring them ODF.

According to Keshubhai Thakur, village accountant of Kuha, the village was declared ODF in 2017 and has 1,065 toilets in the village – one for each house.

NSS volunteer Dedun Parikshit presently studying computer engineering in Ahmedabad knows what it feels like when the house lacks a toilet. His house in a village in Sabarkantha district did not have a toilet and the entire family had no option but to defecate in the open. Now his family has constructed a toilet with their own money without waiting for the SBM grant, as they realized the importance of having one.

Most villagers were using their designated toilets as storerooms. “It is a huge issue with villagers to defecate inside their homes, never mind even if it’s a toilet,” NSS Coordinator Alfaz Mankad told VillageSquare.in. Under SBM, he and other volunteers conducted awareness programs and rallies to explain to residents in Kuha and four other villages, the need to stop defecating in the open and offered voluntary labor for construction of toilets. 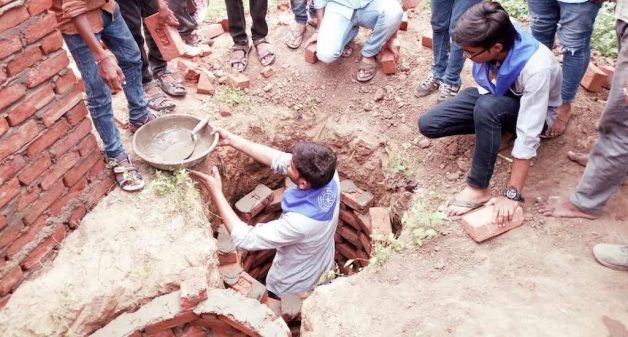 Changing mindsets has been a big stumbling block in successful implementation of SBM. In Kuha, there are several families whose members refuse to use the toilet and prefer defecating in the open, away from their homes. Bharat Rawat, a 42-year-old laborer has constructed a toilet in his house yet defecates in the open. However, his wife Gita and two daughters use the toilet.

Bharat’s brother Kanji Rawat, a compounder, lives in an adjacent house with his wife Saroj. Saroj grew up in a house without a toilet and used one for the first time after marriage. However, she makes sure her three-year-old daughter Kavya uses the toilet.

The men’s excuses are aplenty: The toilet has not been constructed properly; the pit is too small and may overflow if the entire family uses it; there is no tap in the toilet (as per government norm to prevent excess water in pits), and so on. The Rawat brothers intend to make the pits deeper at their own cost someday, so that the entire family can use the toilets.

While Gujarat has been declared ODF in October 2017 as per government guidelines, it is a long way to go for mindsets to change and rural behavior to fall in line, to further the Swachh Bharat Mission.