Many progressive farmers in Telangana are turning barren land into productive farms by adopting permaculture, which involves developing a sustainable and self-sufficient agricultural ecosystem 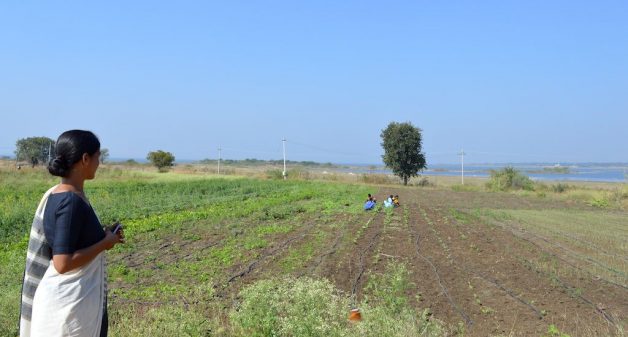 Supriya Gaddam at her Polam Farm in Medak in Telangana. (Photo by Athar Parvaiz)

It had taken them almost a decade to acquire swathes of land in a remote district in the southern state of Telangana aimed at creating their own forest. They began the process of buying land in 2006 from the local people near Sangur reservoir in Medak district in northern Telangana where many families were migrating to urban areas because of lack of basic civic facilities like water and electricity.

But Supriya Gaddam and her husband Anil Reddy had to change their plan about their 96 acres of land when they met Narsanna Koppula, a pioneer of permaculture fondly called by many as Bill Mollison of India. Australian ecologist Bill Mollison is regarded as the father of permaculture movement in the world. Mollison first propagated the idea of permaculture in 1970s following his several years of research, during which he became concerned about destruction of natural processes.

“We started buying land from farmers in 2006 as most of the farmers were leaving this place. By 2015 we had acquired 96 acres of land and we started the process of converting it into a forest. But in the meantime we met Narsanna and his wife, Padma Koppula, who introduced us to an entirely new concept called permaculture. We liked this concept and implemented it straightaway,” Gaddam told villagesquare.in at her permaculture farm, better known as Polam Farm.

The Polam Farm, which was nothing but a vast barren land with depleting soil a few years ago, is now lush all around with several species of fruit trees, crops, flowers, non-fruit trees and animals living in ecological harmony. A water harvesting system in the form of ponds, percolation tanks and contour trenches and immaculate management of resources has entirely changed the land.

The farm is monitored and managed by Gaddam. “In the first year, we used to shuttle between Hyderabad and our farm, which we found tiresome and less productive in terms of work. So we decided to settle in the farm,” she said. “Now, we would never leave this place. It is so fascinating,” Gaddam told villagesquare.in while taking a look at portions of her farm where women workers were busy tending the vegetable plants. 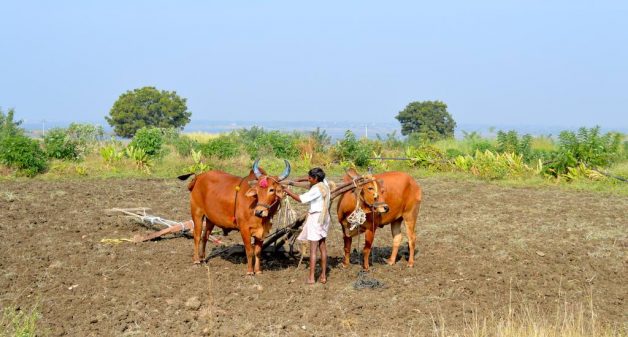 A farmer at Polam Farm is tying bulls to a yoke to plough a field. (Photo by Athar Parvaiz)

Her daughter, Tripti Gaddam, who has recently finished her Industrial Product Designing program, is also planning to join her mother in the farm. “She found permaculture quite interesting when she attended the Permaculture Development Course (PDC) taught by Narsanna, Padma and other trainers at our farm,” Gaddam said.

PDCs are now periodically held at Polam Farm by trainers arranged by Narsanna and Padma. Hundreds of agricultural professionals, researchers and farmers have so far attended these PDCs. In November 2017, the International Permaculture Convergence, attended by around 500 international and Indian participants, was also held at Polam Farm following the two-day conference at Telangana State Agriculture University. All the organic food for the five-day convergence came from Polam Farm.

Doing away with chemicals

“Healthy soils equal healthy humans.” Mudhu Reddy, another progressive farmer of Telangana, has made it her motto. When she decided to return to her family farm after quitting her lucrative hotel management job, she had a clear idea how healthy soils help in taking care of human health. So, Reddy said, “I had developed a strong desire of converting my family farm into a chemicals-free farm. This was one of the important reasons why I decided to get back to my farm.”

According to Reddy, she had the knowledge of environment and how most of the things are inter-connected, but didn’t know what to do with that knowledge. “But when I met people like Devinder Sharma, Harish Hande, Balasubramaniam, and Nandita Shah, it was enlightening for me as I heard about their journeys of pursuing chemicals-free agriculture,” she told villagesquare.in.

“Since I started in 2013, our farm — Aiyor Bai — has been on the journey of change as well. We completed three full monsoon cycles in 2016 (and also in 2017) of not using any chemicals in the form of pesticides or fertilizers,” Reddy said, adding that she is now pursuing permaculture at her farm following her participation in a recent PDC.

“Through my farm, I am trying to help farmers and common people understanding the importance of good local food on our health and the impact of healthy soils on food production,” she said and added that the crops she grows at her farm include eggplants, tomatoes, gourds, beans and millets like jowar and bajra. Her farm is 57km north of Hyderabad in Rangareddy district.

Reddy puts a lot of emphasis on the health of soil, especially when it comes to organic farming and permaculture. Healthy soil, she says, is only possible through non-chemical farming. “All the workshops, the farm visits and meeting with farmers made me realize that the fertility of the soil is the key for success of any farm,” Reddy told VillageSquare.in.

Prominent soil biologist and ecologist Sultan Ahmed Ismail says that it is the soil that determines the health or quality of the crop. “In the farming driven by chemicals, synthetic fertilizers are pumped into the crops, whereas organic farming or permaculture focuses on soil health. When the soil is healthy and well-nourished, it automatically feeds the crops with essential nutrients,” Ismail told VillageSquare.in.

Narsanna and his wife Padma have been pursuing permaculture for several years now. According to them, permaculture is pro-nature and pro-people. “What we focus on through conventional farming system in India and various other countries is a few crops, which are market-driven. We need to change this and permaculture is the best guide to do so. Permaculture doesn’t allow growing single crops, but stresses on growing a variety of crops in harmony with other tree species, animals and humans,” Narsanna told VillageSquare.in.

Through the non-profit Aranya Agricultural Alternatives (AAA), they are working with tribal communities with special focus on women and farmers. “Our philosophy is based on the three ethics of Permaculture — Earth Care, People Care and Fair Share. We believe in working with nature, to empower communities to overcome existing social and environmental challenges,” reads the slogan of AAA.

According to Padma Koppula, CEO of AAA, her organization advocates and promotes alternatives and permanent agriculture practices — benefits of tree-based farming, diversified cropping, animal integration and seed saving. The work of AAA has so far influenced thousands of farmers and agricultural professionals in Telangana and Andhra Pradesh, who are now designing their farms on permaculture models.