As against government’s promise to make water available through the seasons, inadequate check dams have not brought any relief to farmers in this semi-arid region who continue to struggle for sustenance 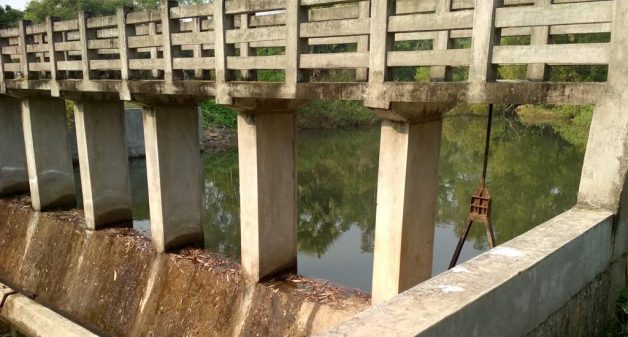 The Abadnagar check dam has not fulfilled the purpose of irrigating farms. (Photo by Gautam Sarkar)

A major part of Birbhum district of West Bengal that borders Jharkhand has always had water woes — not enough to douse a fire at times. In 2011, when people heard about the proposal to build check dams, they were exhilarated.

Earlier, they had been excited about a proposal to introduce a canal system. When nothing came of that proposal, they resigned themselves to a perennial drought-like situation. They felt that their fate was sealed by the laterite soil of their land. When people learnt that the proposed project would be implemented through a World Bank-funded Accelerated Development of Minor Irrigation Project (ADMI), their hopes were rekindled.

The Rajnagar administrative block is one of the backward areas of an underdeveloped Birbhum. The eastern part of the district fares better, as it adjoins the rice belt of the neighboring Burdwan district. The fertile soil of the east rolls into the red soil of western Birbhum.

The red soil is a remnant of the rocks of Chota Nagpur Plateau and is unyielding. A substantive part of western Birbhum is thus unproductive. But the land that can come under the plough has a different problem.

The rivers that run through the region are shallow and seasonal. At other times, they can be best described as brooks that disappear with the onset of summer. Here the temperature soars as high as 480 C. The laterite soil cannot retain any moisture.

The ponds dry up and turn to puddles, not enough even for the buffaloes to wallow in to maintain their body temperature.

The government had considered introducing a canal system. The plan was to use the canals for irrigation. However, the scheme did not materialize and western Birbhum remains a water-starved locality.

Yet, the principal occupation of the people of Birbhum and Rajnagar is farming. As farming depends on the vagaries of the rain god, the farmers can grow only one kharif (summer) crop of rice. Though practically and economically unviable, rice has been the only option of farmers for ages. 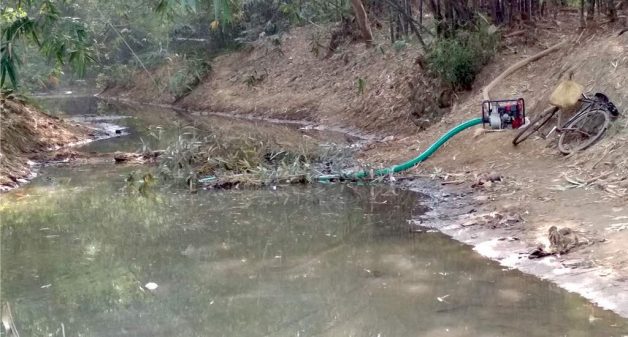 Farmers in Nityanagar pump water from a kando to irrigate their crops, hoping that the water would last the season. (Photo by Gautam Sarkar)

Some farmers whose fields are adjacent to a pond or a kando cultivate vegetables. A kando is a natural depression of land where rainwater collects and remains till winter.

The surmise for construction of check dams was that they would transform the agricultural landscape of Rajnagar for better. By retaining the rainwater long after the rains ceased, new irrigation techniques could be implemented, which in turn would prolong the crop-growing season. Western Birbhum farmers felt that they could finally grow a rabi (winter) crop.

It was thought that the water from check dams would remain till the next monsoon. Apart from recharging the nearby wells it would prevent bore wells from drying up in the scorching summer. It was also envisaged that the spillover from the check dams would help lands other than those under its direct reach.

In Rajnagar block, under the ADMI project, the public works department (PWD) constructed a total of seven check dams, at a cost of Rs 6 million each, equipping them with solar-powered water pumps. A water users’ association (WUA) with 202 farmers was registered to manage the distribution of water.

When winter had just set in, there was water in the reservoir of Abadnagar check dam. When the sun was about to set, a villager from a neighboring village came to bathe and wash clothes, despite the nip in the air.

“This check dam is a good thing, but it does not serve its principal purpose,” Gour Mondol, a graduate, a rarity in Abadnagar, told VillageSquare.in. The villagers believed that the pump would help distribute water efficiently, but it did not. The system could not pump water to the farther fields. Only those near the check dam, of about 100 bighas (40 acres) of land, got some water. The rest remained deprived.

The standing rabi crops of wheat, potato and mustard needed about six irrigations, according to the villagers. “This water is not more than waist deep and it won’t last more than four irrigations,” Sanatan Sil, a resident, told VillageSquare.in, after observing the crops and water from the Abadnagar weir. “Not enough for a good rabi harvest.”

The area and the depth (1.5 m) of the reservoir were found wanting. It appeared that the planning agency did not take the undulating topography into consideration, while designing the check dams. Another factor that seems to have been overlooked is the high temperature, aridity and heat waves that western Birbhum experiences.

The rabi crop might not get sufficient water this year too. The villagers said that the reservoir would be as dry as the nearby ponds in summer. “It will not help farmers during the kharif season, if the rain is late,” said Sanatan, debunking the government’s claim of the check dams supplying water though the year. 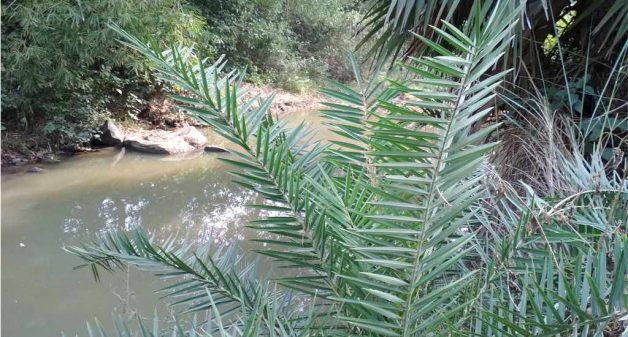 Water in the natural depressions is not sufficient for irrigation. (Photo by Gautam Sarkar)

The monsoon runoffs from the neighboring fields carry sand and mud into the reservoir, diminishing its depth. In the three years since its completion, the bed of the reservoir has risen substantially. The government has not de-silted the reservoir bed.

Money has been spent but not well spent. The weirs of the check dams are already showing cracks that are likely to widen in future. The sluice gates have rusted and do not work properly. Maintenance does not come under the purview of WUA; and the government has moved on. With water levels so low, the WUA has become redundant.

The demography of western Birbhum comprises an equal percentage of general and scheduled castes (SC). Lesser percentage of SC own lands. Most farmers are either sharecroppers or with smallholdings, less than four bighas (1.6 acres) generally.

For the farmers of Birbhum, who cultivate rice, last year was not good. With erratic rainfall, the yield was less than the average six quintals per bigha, which is half the yield registered in Burdwan, a leading rice producing district.

Revenue from the farms fetches them just their meal and snacks, rice and puffed rice, respectively. There is no scope for regular income in western Birbhum that boasts of a single industry, the state-run Bakreswar Thermal Power Plant.

Sisir Sheet took his cows into the barren fields for grazing. As far as one could see, there was nothing but dried rice stalks jutting out of the brown earth. He said that he does not make any money from the four bighas that he owns.

“The cash comes from my four cows; I sell milk and ghee, depriving my children,” he told VillageSquare.in. He cannot do menial labor, for his status as a landowner forbids him. He works under Mahatma Gandhi National Rural Employment Guarantee Act (MGNREGA) when possible.

According to the dairy statistics of West Bengal, released by National Dairy Development Board (NDDB), the yield of cows in Birbhum is less than in most areas of Bengal. The cows here lose a lot of calories in finding grass; and the dried grass does not provide good nutrition.

The situation is the same in the check dams in Dubrajpur and Khoyrasole blocks. The check dams have become just an extension of the traditional kando. It has not brought about any change in the rural economy. People’s enthusiasm is dead. Moreover it threatens to create a divide between the privileged and the deprived farmers.

Water controls the lives and economy of places like Rajnagar. For the predominantly agrarian population of marginal and small farmers, the situation has not improved. Water from the check dams, ponds and kandos barely irrigate 10% of the land during rabi season. A second crop in western Birbhum is of utmost necessity for the sustenance of farmers.

Despite the failure of check dams, the government has floated tender for the same at Sainthia block, with topography similar to that of Rajnagar.

“The government must find a source of water to channelize to western Birbhum so that we can have a life,” Gour told VillageSquare.in, sounding hopeful. Many districts of West Bengal suffered disastrous floods in 2017. All that wasted water could solve Birbhum’s water woes.