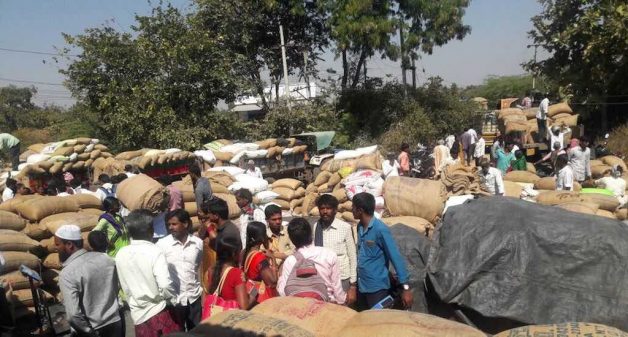 Government procurement of tur dal leaves much to be desired. (Photo by ALC India)

In May last year, I wrote about the plight of tur dal farmers in VillageSquare (See: Telangana’s tur dal farmers face yet another uncertain season). I had said at that time that the constant swing in the prices of tur dal in Telangana from one year to the next and tardy implementation of the government’s procurement mechanism have made life tough for thousands of subsistence farmers in Kodangal and Hasnabad.

Unfortunately, the situation in February 2018 remains the same. Long after the announcement of the minimum support price (MSP) for tur dal (pigeon pea) was announced, the implementing mechanism is just not present in the states of Andhra Pradesh and Maharashtra, leaving farmers to face the vagaries of the market. MSP refers to the price the government pays to buy produce from farmers.

The agriculture ministry made the announcement for enhanced MSP in October 2017. The central government increased the MSP for Rabi (winter) crops for 2017-18 to encourage farmers to bring a major area under their cultivation. The Cabinet Committee on Economic Affairs (CCEA) approved the revised MSPs of some Rabi crops — Rs 110 for Wheat, Rs 400 for pulses and Rs 300 for mustard.

With the MSP hike that was announced, tur dal was expected to be bought at Rs 5,550 per ton at the time of procurement. The increase in MSP by Rs 500 over earlier years was seen as an added incentive to farmers, especially in the states with scanty rainfall. This was a clear message by the government and an encouragement to grow more pulses, a similar appeal made by Prime Minister Narendra Modi two years ago to make the country self-sufficient in lentil production. However, the situation on ground is quite disappointing, contrary to the lofty policy announcements that are reported in popular media.

VillageSquare spoke with two representatives of promoting organizations that have a track record of organizing farmers into farmer producer companies (FPCs) in the states of Telangana and Maharashtra. While the government made the announcement for MSP almost four months ago, there was no corresponding arrangement for logistics to fulfill the promises and to implement these announcements.

For the MSP mechanism to see the light of the day, somebody has to be present in villages to procure, to weigh, to grade and to certify a given quality parameter and finally to pack the produce before transporting. This has to be backed by adequate payment procedures so that farmers are paid in time for the produce they bring to the collection centers. A well-organized FPC can at best assure that farmers in their operating area are aware of the MSP procurement centers and that they bring the harvest to those centers but only if there is someone to procure from them.

In earlier years, the Small Farmers Agribusiness Consortium (SFAC) of the farm ministry had taken lead in executing the MSP procurement. This was reported in VillageSquare (See: Collective farm gate procurement offers solutions to cover price crashes). For some reason, the SFAC is not working on this mandate this year. As a result, while farmers are waiting with the harvest in hand, there is almost absence of any reliable procurement machinery on ground.

“SFAC is not active, unlike last year. The state government of Telangana asked its marketing federation and the district marketing societies to arrange procurement of tur dal in our areas, the area where three of our all women FPCs are functioning, in Kodangal. Last week, they opened a few procurement centers for just about three days. And suddenly they closed those centers. Our staff is now discussing with the government officials,” Sarat Kumar G.V., a senior professional working with Access Livelihood Consulting in Hyderabad, told VillageSquare. “Our farmers are told to take the stocks to APMC (agriculture produce marketing committee, or wholesale markets) where they have to wait for their turn. It might be anything from 10 days to 20 days before their produce is accepted.” 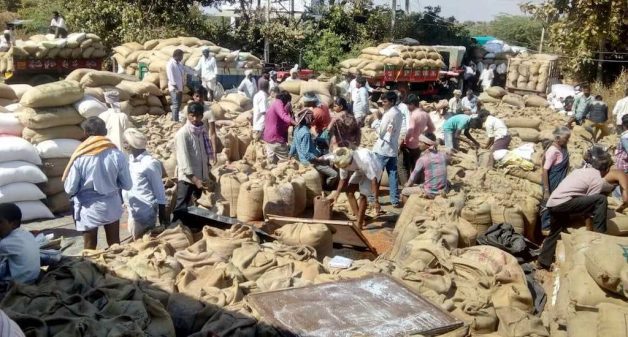 “Coupled with this delay, the ruling price in Tandur market is at around Rs 4,500 per ton, way below the declared MSP,” he said. “So if some farmer needs ready cash, there is no option but to go for a distress sale and the loss is going to be Rs 1,000 Rs per ton. Added to this plight is the fact that, in spite of less acreage (of sown area), the productivity and the quality of the produce is high. If farmers are not compensated, where they will go to sell the produce?”

The situation was the same in Maharashtra, Kiran Dumbre of Pune-based Maharashtra Farmers Producing Companies Consortium (Mahafpc), a farmers’ organization that did procurement on behalf of SFAC in the past two years in the state, told VillageSquare. SFAC did not take up this activity this year, he said. Instead it entrusted the task to National Agricultural Cooperative Marketing Federation of India (NAFED) and the state government, saying it did not have adequate infrastructure.

“As a result, the procurement is not happening or wherever happening is at a very slow pace,” Dumbre told VillageSquare. “The government wants each farmer to register first. Per farmer, there is a ceiling of three acres. We are in discussion with the SFAC and the state government to take up procurement.”

Another professional working to promote FPCs commented on this delay and pointed to a turf war being silently played, resulting in indecision to begin procurement. The state governments do not want the FPCs to be aggressive in procurement operations of MSP. It is allegedly because senior officers of the state marketing boards and the lower level functionaries of district marketing societies do not want to give up their role in MSP operations.

If the FPCs step in and do a good job of implementation as many of them did last two years in many states, the government-controlled marketing boards stand to lose the commission that they otherwise would have got from the MSP operations. The moot question is if most of the state government promoted apex marketing boards and district level marketing infrastructure were functional and efficient, there was no need for SFAC to step in. The unsaid fact is that most of the marketing infrastructure of the state governments is more or less moribund, and farmers find it difficult to trust them.

So the uncertainly continues for thousands of small farmers. While there are magnificent announcements like doubling farmers’ income by 2022, a lakhpati kisan (a farmer who earns one lakh) and the recent budget announcement of at least 50% MSP above the cost price, if there are no commensurate implementation support mechanisms on ground, these announcements are likely to remain hollow and more of election gimmicks as the recent MSP operations are to go by.

There is clearly a need for minimum support to the implementation of the MSP. Is the story of tur dal procurement another example of minimum governance and maximum announcements?

Ajit Kanitkar is a consultant for Tata Education and Development Trust and a member of the research team at Vikasanvesh Foundation in Pune. Prior to this, he was Program Officer at Ford Foundation, India office, and Swiss Agency for Development and Cooperation, both in New Delhi. He taught at Institute of Rural Management, Anand, during 1992-1995. Views are personal.