Sugarcane farmers in this part of rural Tamil Nadu have been adding value to their produce through a slow and arduous process, and offer jaggery as a healthier alternative to sugar 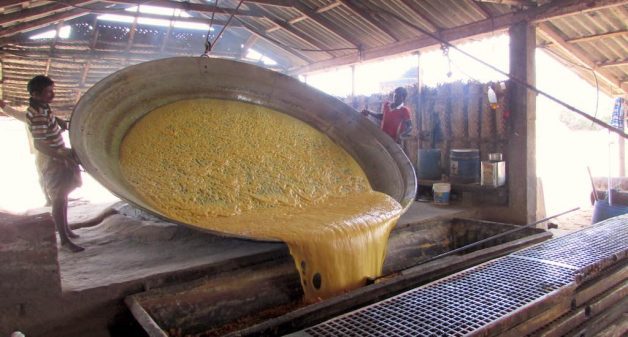 The entire family is involved in the slow, laborious process of making jaggery. (Photo by Chithra Ajith)

The sweet smell of sugarcane syrup permeates the air as one enters Neikkarapatti. The welcoming aroma owes its origin to the 75 units that make jaggery. With sugarcane as the main crop in this and neighboring villages, jaggery making is a prominent cottage industry.

Neikkarapatti village is in Dindigul district of Tamil Nadu, and is about 15km away from Palani, known for the hilltop temple. Cattle rearing was the main occupation of the villagers during the British era. Villagers supplied milk and homemade ghee to the British people in the nearby plantations and the place earned the name of ghee-man’s village or Neikkarapatti.

Now with sugarcane being cultivated in the locality, Neikkarapatti is known for its good quality and high production of jaggery. Most of the farmers here cultivate sugarcane and own a jaggery-making unit. Some cultivate in leased lands. When there is a shortfall, they buy from other places, sometimes even from Mysuru in Karnataka state.

With manual jaggery making a family affair, the families involved carry on with the traditional work, unmindful of the challenges.

“I enjoy making vellam (jaggery) and my whole family works with me,” a visibly happy 66-year-old Ayyavu told VillageSquare.in. Almost all the units in the village are extensions of the houses, as the entire family is involved in the jaggery-making process.

Sumathi, Ayyavu’s wife, recalled her childhood memory of being in the unit. She recalled going with her sister and peeping into the unit of her grandfather, who would quickly roll the sticky syrup between his palms and give them. “Jaggery making was the main work in our village from the days of my grandparents,” she told VillageSquare.in.

The tradition continues, with the next generation joining in the work. “My wife and mother-in-law join us after they finish the household works,” said Marthandan, Ayyavu’s son-in-law.

“We pore the sugarcane juice from the crusher into huge steel vats on fire,” said Marthandan. The dried cane pulp used as fuel to boil the juice provides high heat and leads to zero wastage.

It takes two to three hours on the fire, with continuous stirring, for the juice to reach the required consistency. When it reaches the right consistency, the men pour it into wooden molds kept in water, to hasten the cooling process. After cooling, the workers collect the cubes in bags. The jaggery goes by different names, such as achu vellam and mandai vellam, based on the shape of the mold.

The whole process will take about five hours. “We start work at two in the morning and usually continue till four in the evening, so that we can make seven batches,” Marthandan told VillageSquare.in.

At the market, jaggery makers sell it in bags of 30kg called sippam. “We can make 210 bags from 1.75tons of juice,” said a farmer-cum-jaggery maker. One unit can make about 15 bags at a time.

Neikkarapatti has five auction centers exclusively for jaggery. These markets sell only cubes. Farmers bring jaggery from different parts of Tamil Nadu to the Neikkarapatti market. Besides Neikkarapatti, Erode, Karur, Salem, Thanjavur, Gobi and Sathyamangalam are the other places in Tamil Nadu where jaggery is made. 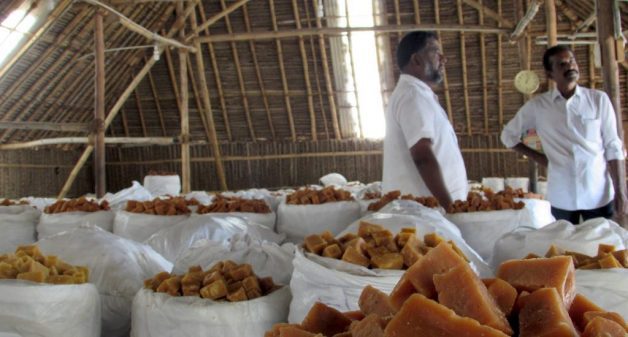 Traders at a jaggery auction center in Neikkarapatti. (Photo by Chithra Ajith)

At the auction, the price ranges between Rs 1,200 and Rs 1,500 per bag. Normally 3,000 bags reach the market on Wednesdays and 4,700 bags on Saturdays. “Apart from wholesale traders, hotels, temples and Ayurveda medicine manufacturers buy from us regularly,” Hari, a senior trader, told VillageSquare.in.

Fair rainfall makes better sugarcane. The quality of sugarcane determines the taste and color of jaggery. Rajesh, a trader, said that Kerala is their main market. According to him, each district of Kerala has a distinct preference. “Thrissur loves white jaggery whereas Kozhikode prefers pink; Kannur picks up red but Wayanad chooses black,” he told VillageSquare.in. Temples prefer brown jaggery and Ayurveda medicine making units use black.

During festival seasons the demand increases and hence the price. “Pongal is the main festival in Tamil Nadu and people make sweet pongal where jaggery is the main ingredient,” said Hari. In Kerala, the demand for jaggery increases during Sabarimala pilgrim season.

The Neikkarapatti villagers lead a simple, satisfied life. “We earn what we need,” declared Ayyavu. “We sleep early and wake up early, have simple food and work hard,” another jaggery maker told VillageSquare.in. Ayyavu admitted that their world revolves round their farm and home and that they meet other people only on market days.

The women cook food for the day in the morning. “We eat the same rice and curry for the day’s three meals,” said Ayyavu. After cooking and cleaning, the women lend a hand in the crushing, boiling, cleaning and packing. According to them, the next generation does not like the simple lifestyle and many have moved away for studies and career.

The farmers continue to make jaggery despite the tiresome process and market challenges. “Sometimes jaggery price goes down when traders purchase jaggery from other states,” said a concerned farmer. “If the government fixes some subsidy or supportive scheme for jaggery making, it will be very helpful.”

Traders have their own concerns. They said that increased competition in the market forced them to sell jaggery with a reduced profit margin. Increase in agents’ commission and transportation charges are some of the traders’ concerns.

“Traders from the North are trying to expand their market to the southern states,” Hari told VillageSquare.in. “But we are happy because we sell a healthy product that does not have an expiry date.”