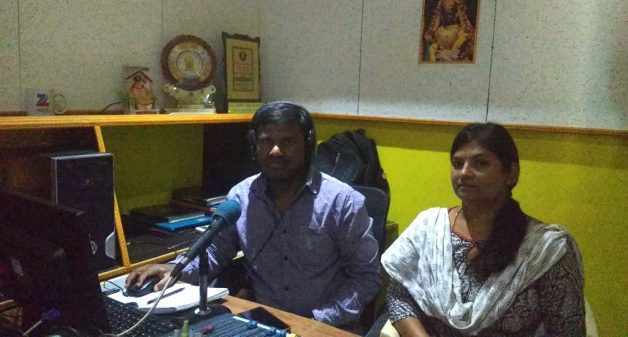 Sunil and Nagamani at the Sarathi Jhalak radio station during a program. (Photo by Sudha Narasimhachar)

Radio broadcasting has played an important role in times of wars, freedom struggles and natural disasters. Before the advent of television, radio was our greatest companion, helping us know about the world, keeping us engaged and entertained.

It is surprising how even in today’s world of 24/7 television channels, Sarathi Jhalak, a small community radio station in the Hoskote taluk of Bengaluru Rural District is creating waves. The programs have a wide audience in Malur taluk of Kolar district and in the eastern periphery of Bengaluru city like Varthur, Marathahalli and Mahadevapura that border Hoskote taluk and Hosur in Tamil Nadu.

Jhalak, meaning glimpse, offers rural listeners a glimpse into aspects on health, agriculture, literature and legal awareness, among others. The community radio benefits residents of nearly 250 villages around Anugondanahalli, where the station is located, at a distance of 30 km from Bengaluru.

Shamanthaka Mani, an experienced journalist, envisioned that radio was the best medium to penetrate the rural parts of Karnataka and reach the grassroots. She launched community radio Sarathi Jhalak FM 90.4 in August 2012 through Sarathi Trust, supported by the government of Karnataka with a seed capital of Rs 5 lakh.

Sarathi Jhalak is run primarily by women. Sunil, a graduate, who runs the station along with Nagamani, is a Dalit and a first generation literate in his family. Nagamani is a small farmer who grows vegetables, lentils, plantains and other fruits in her one acre of land and comes to the radio station thrice a week. Sunil and Nagamani, as well as the other young radio jockeys, are from the neighboring villages. 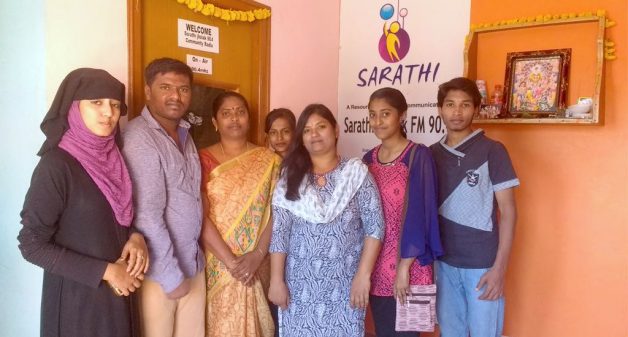 The team at Sarathi Jhalak community radio station that empowers and entertains residents of 250 villages. (Photo by Sudha Narasimhachar)

Supreetha, a college student from Devanahalli in Bengaluru Rural District, travels once a week to Anugondanahalli that is 45 km away. She travels 60 km one way to reach the radio station by changing buses five times, since the two places are not directly connected by public transport. However, she does not mind the tiresome journey. “Because I enjoy making the programs and participating in the programs of Sarathi Jhalak,” she told VillageSquare.in.

Starting at 7 am and closing at 9.30 pm, the station broadcasts programs for eight hours a day, on all weekdays, in two-hour and three-hour schedules, with breaks in between. Aimed at the rural population, most of the programs are interactive and the radio receives good response over phone and text messages on mobile phones.

Breaking stereotypes, Sarathi Jhalak produces literary programs, besides inviting eminent persons from various fields as guest speakers. The speakers motivate the village youth. As another aspect of youth programs, the team airs Kathaleyinda Belakinattha (From darkness to light) to help job seekers. The program serves as a bridge between employers and prospective candidates.

All the programs are interspersed with public interest advertisements on traffic rules, health, hygiene, and so on. The team also goes to the field and conduct vox populi programs on locale-specific problems. Connecting to its listeners beyond the air, the station conducts debates, quiz programs, painting competitions and sports meets for the children of neighboring villages.

“The recent survey by Department of Science and Technology of Government of India declared that our station has 75% listenership,” Sunil told VillageSquare.in.

The team cites many incidents, where their programs have played a pivotal role in bringing about changes in the society. “Quite a few women have thanked us that their spouses quit drinking or smoking after listening to our awareness programs,” said Sunil proudly.

Phakeeresh said he quit smoking after listening to an awareness program. “My family life was a mess because of my drinking habit,” Durgappa told VillageSquare.in. “Free of my habit, now I am a happy and healthy man.”

Arogya Khanaja, meaning health bank, focuses on health and hygiene. So far more than 15 specialist doctors have participated in this phone-in program and many listeners have received free treatment for their ailment from the same doctors.

After the station aired about needy patients with serious illnesses, and about the educational needs of merited students, listeners offered financial assistance. Guru undergoing free eye surgery, little Divya getting free speech therapy and reunion of Narayana with his family after he went missing are a few of the positive impacts of the station’s programs.

During Diwali, the team invited local panchayat officials. They requested the officials for quick action as the festival resulted in a lot of garbage. The authorities formed special teams to clean the garbage left by crackers, flowers and festoons. A local hospital started functioning properly after a radio program revealed the misuse of services, diversion of medicine and the like.

The talks by officials from the agriculture department have helped many farmers avail of various schemes of which they were not aware earlier. Villagers unaware of a central government housing subsidy for nearly 2,000 houses availed of the same.

The programs have not only benefitted rural listeners but the producers as well. The present team is the third since inception. Sarathi Jhalak has groomed them all into independent thinkers, creative producers, team leaders, socially active persons and responsible citizens.

The people who man the radio station get trained in the technical aspects and also in personality development, public speaking and leadership. Sunil says he owes his confidence and skills to Sarathi Jhalak.

Sunil and Nagamani, who were reticent villagers, speak confidently today, even in public forums. Sunil addressed a gathering at the All Karnataka Radio Meet in Puttur and won accolades. Nagamani, who attended the Network of Women in Media, India at Chennai, is proud of having been covered by national media there.

Sarathi Jhalak serves as a training ground for urban students interested in community radio. Ramsha travels from Medimallasandra village once a week since her experience at Sarathi Jhalak helps her in her journalism course. “I owe a lot to the station as I got financial assistance for my college fees because of them,” Ramsha told VillageSquare.in.

Many students who went to Sarathi Jhalak for training and hands-on experience are now placed in popular media channels as radio and disc jockeys.

Jeevitha from the outskirts of Bengaluru and Siddharth from a village near Anugondanahalli are aspiring singers. “Sarathi Jhalak provides us a platform to showcase our talents,” Jeevitha told VillageSquare.in. The youth help Sunil and Nagamani with the other programs.

The radio station is totally dependent on donations and hence funding is a challenge. Shamanthaka plans to take the community radio online, for which she needs to invest in another system. “I plan to publish select programs in print at regular intervals so that it serves as a documentation of the works that Sarathi Jhalak is doing,” Shamanthaka told VillageSquare.in. The documentation would also serve as a ready reckoner for anyone looking for reference on community radios at a later stage.

The lockdown disrupted the supply of an FPO’s carbide-free mangoes to its market in Ahmedabad. Collective action by Anand’s institutional staff enabled delivery of mangoes directly to consumers