Rainwater harvesting is the best way forward for irrigation

Exploited by their so-called masters, the folk dancers of rural Bengal have no option but to keep dancing and entertaining to escape poverty and destitution, shunned by society and with no help from the government 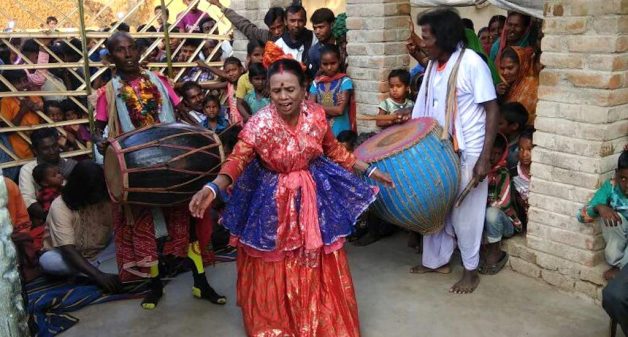 Girls become dancers to escape poverty, but end up being exploited by their masters. (Photo by Gurvinder Singh)

Bimala Devi was just five years old when her parents got her married, as they were too poor to arrange for a square meal a day for their 12 children. They thought marriage of their child was the only option that would ease their burden of feeding so many mouths.

Two years later, Bimala became a widow. She returned to her parents’ house at Bankura district of West Bengal, around 200 km from the state capital Kolkata. She then began to take up odd jobs to sustain herself.

At the age of 12, Bimala joined a dance troupe and became a nachni or nachaniya. Raghunandan Kumar, who ran the troupe, became her rashiq or master. In this traditional folk art, a woman dances to the accompaniment of dhamsa, a folk musical instrument.

There was a time when these dancers were patronized by local kings and zamindars. But those days are long gone. Now they earn a living by dancing during festivals and marriages in villages and also during winter.

At 72, Bimala is one of the oldest of the 80-odd nachnis in Purulia district of West Bengal. Most of them became dancers to escape poverty, but ended up under the control and mercy of their masters.

Raghunandan, who was thinking of starting a folk dance group, asked Bimala if she would be his group’s dancer. “I was desperately in need of money and agreed,” Bimala told VillageSquare.in. She became not only his dancer, but his possession as well, in spite of him being married.

Charu Bala was a minor when her parents got her married to a man twice her age. She suffered harassment and torture at the hands of her husband. The situation worsened when she did not have a child. “I begged him when he threw me out of the house but he didn’t listen,” she told VillageSquare.in. With tears rolling down her cheeks, she recounted how her master who had come to her village for a show agreed to take her in, since her parents were too poor to feed her.

Tales of parents selling their girls to make them dancers is common in this part of West Bengal. The so-called masters exploit the poverty of the girls’ families. They promise the girls’ parents that they would provide employment and food to their wards.

“They offer rosy dreams and purchase the girls by paying Rs 2,000 or Rs 3,000,” Posto Bala Devi Karmakar, a nachaniya, told VillageSquare.in. “After taking a girl under his tutelage, the master would sexually exploit her.” According to her, some masters force the girls to undergo birth control surgeries. “It allows them to exploit the girl for a longer period without the headache of having a child and its upbringing,” she said.

Bimala recalled adoring her master Raghunandan like God. Emphasizing that masters enjoy complete right over their dancers, she said, “I could not refuse him since he gave me food and shelter and trained me in dancing.”

According to Smarajit Jana of Durbar Mahila Samanwaya Committee, which is working for the nachaniyas in Purulia district, the dancers consider it their duty to keep their masters happy even if it amounted to sexual exploitation and having their children. “They think their masters gave them a new lease of life by providing them with bread and butter,” he told VillageSquare.in. 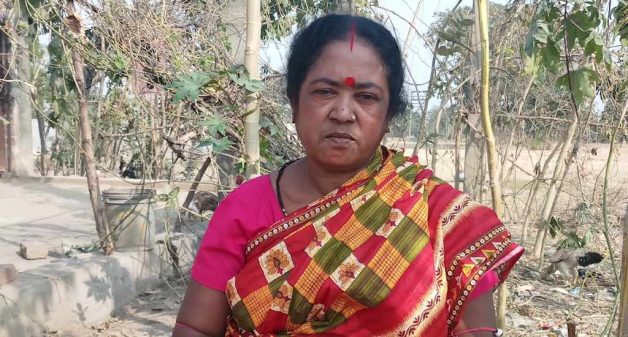 Though not formally wedded to their masters, the dancers identify themselves as married women with their vermillion marks. (Photo by Gurvinder Singh)

“Their unquestioned faith on their masters could be gauged from the fact that even without a formal marriage, they put vermillion mark on their foreheads, generally worn only by married women,” he said. With a single dancer in a troupe, the women remain loyal to their masters despite hardships.

Charu Bala’s master Shraban Kalindi dismissed allegations of sexual exploitation and said it was “natural” to have a relationship with the dancer whom they trained and provided food and shelter.

Charu Bala said that they dance continuously for many hours and get a pittance in return. “We get Rs 200 or Rs 300; the master takes the bulk and divides the rest among musicians and troupe members who number around seven,” she said.

Though they become dancers to escape poverty, it is a constant companion for many of them. The dancers’ life becomes pathetic once their masters who have been controlling them over the years pass away. Raghunandan died 26 years ago and since then Bimala has been living with her son fathered by him. She does odd jobs to make a living. 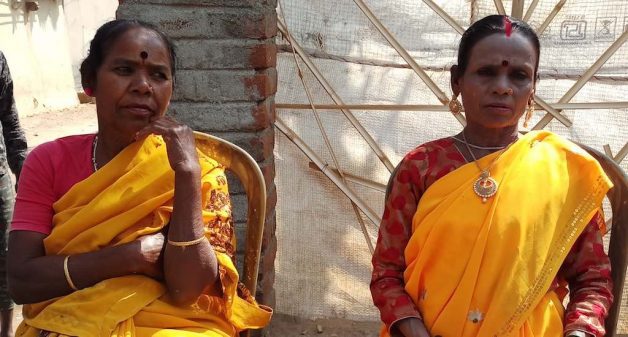 Bimala Devi and Charu Bala are among the oldest dancers, the latter at 60, who continue to perform. (Photo by Gurvinder Singh)

Society and families of the masters scorn the dancers. When Charu Bala’s master took her home, his wife assaulted Charu Bala. “She hurled abuses at me saying I snatched her husband.”

Till a few years ago, rural society considered the dancers untouchables. They were made to live outside the villages. “People considered us too impure to be burnt in the crematoriums,” Karmakar told VillageSquare.in. “The mortal remains of nachnis were tied with ropes, dragged and dumped into the burial pits.”

Despite being at the receiving end of the families of their masters and facing social stigma of the society that does not hesitate to call them concubines, the nachnis play an important role in running the family of their masters.

According to Jana, the attitude of the masters’ families towards the dancers has been changing. The masters’ family members have come to realize that the dancers are their source of income. “I know women who let the nachnis stay in the house despite being aware of her husband’s relationship with her,” said Jana. “In some cases, the entire household depends on her.”

True to Jana’s words, Shraban Kalindi’s family of 14 members depends on Charu Bala, who performs even at 60 and works at a primary school when she is not performing, “My wife now has a cordial relation with Charu, as she takes care of the financial needs of my family,” Kalindi told VillageSquare.in. “My children and grandchildren look upon her for food.”

There has been no intervention by successive governments to change the lives of these unfortunate folk dancers, apart from the monthly allowance of Rs 1,000 that the state government gives artistes.

When there are no performances or when the masters pass away, the women work as agricultural laborers or take up odd jobs.

Unfortunately, the nachnis are too illiterate to understand anything about the law that prohibits adultery; they display complete faith and loyalty to their masters.

Charu Bala, who has a daughter through Kalindi, got her married to a well-settled family in Uttar Pradesh. But most of the girls born to dancers and their masters do not get educated and are married off early. In spite of their art form having pulled them out of poverty, the women do not want their children to become dancers.