While the priority given to tomato, onion and potato (TOP) farmers by the Prime Minister is a welcome move, special attention must be given to smallholder vegetable growers, since horticulture provides a nutrition and income buffer to the rural poor 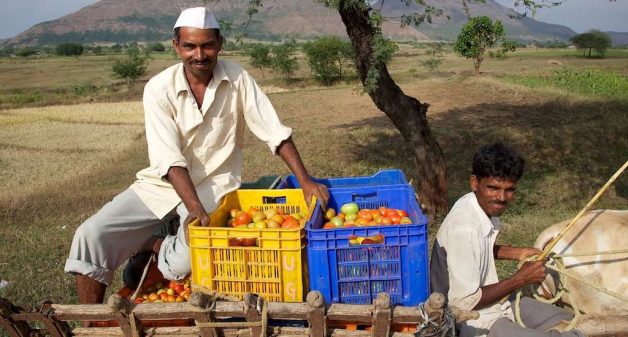 Farmers near Nashik in Maharashtra on their way to the market with their tomato harvest. (Photo by Michael Foley)

While on a recent tour of Karnataka, Prime Minister Narendra Modi in his inimitable style stated that TOP is his top priority. He was referring to creating conditions for improving and stabilizing the incomes of producers of tomato, onion and potato. As is natural, many people have since been talking about TOP and how critical it is for the farm sector.

It is indeed true that the share of cereals in total agricultural GDP has been falling and no longer contributes to less than half the agricultural economy. Milk production accounts for a huge proportion of the rest, with horticulture coming next. Within the horticulture group, TOP does account for a large proportion. Thus, there is no gainsaying the importance of TOP.

Secondly, given the repeated experience of cycles of shortage and gluts in these commodities caused by counter-cyclic behavior of production and demand, the importance of stabilizing economy of TOP crops and hence of TOP growers, too, is convincing. There is convincing circumstantial evidence to indicate that farm sector as a whole is at a disadvantage vis-à-vis services or manufacturing sector. Therefore, the dominance of relatively well-off farmers in cultivation of TOP is a tenable hypothesis that by itself is not a reason for alleging a kulak bias for those who seek to protect the TOP growers.

Even so, we believe that a focus on TOP will again dilute the focus on the bottom rung of the farming community. Since the total investible resources are limited, there is the oft-repeated conflict of interest between TOP and bottom. The very small landholders, who achieve a remarkable substitution of labor for land in the production of horticultural crops, represent the bottom.

Some of the most productive horticulture producing regions are around Biharsharif in Bihar, around Ranchi and Patamda in Jharkhand, around Nashik in Maharashtra and in the so-called grey water vegetable clusters downstream of all rivers that drain the large cities like Hyderabad, Nagpur, Pune, Ahmedabad and so on. And then there is a large number of bottom-rung producers in far-flung, rain-fed areas, often tribal or dalit farmers, who see a huge opportunity of supplementing their incomes or become more food secure by growing horticulture produce and selling it in nearby markets.

Who are these people? What do they do? Which crops do they grow? What problems do they face? And to what extent are these problems below the radar of policymakers? These are some important questions that need to be raised. We would like to call them bottom rung partly from driving the point regarding contrast between their crops and TOP, and mainly because they indeed are closer to the bottom rung of farming communities in the country.

A development worker in Nashik area emphatically asserts that trying to scale TOP production is an invitation to disaster. “It is a rare farmer who will grow tomato in 5 acres who does not incur a loss of Rs 5 lakh in the season,” he told a gathering of development professionals some time ago. His logic is this. A medium or large farmer of TOP commodities will perhaps use relatively more capital-intensive technology and hence is likely to plant his entire land meant for the purpose at the same time.

What this will do is to ensure that all his production comes at a single point in time. This creates a yo-yo like situation in his economy. If the market is starved of TOP when his crop is harvested, he makes a killing, enabling him to buy another tractor or sink another deep tube well in addition to perhaps managing to marry his daughter, etc. If the market is depressed at that time, then his investment goes for a toss and, as our friend says, he will incur a loss of Rs. 1 lakh per acre.

How does the bottom behave? The small farmer has a strong faith in diversification across time and across crops. Continuing the preaching of our development professional, the bottom rung ought not to plant more than a fortieth of an acre (one guntha) under one crop at one point in time. He may plant one guntha today, another guntha next Tuesday, a third guntha the Tuesday next and so on so long as he is within the broad time window in which such planting makes technical sense. This makes for small production lots and smaller market risks for each harvest and an overall risk diversification over the planting season. Crop diversification automatically diversifies the risk since not each of vegetable will experience a glut at the same time.

Finally, the development professional strongly advises to attempt at least one or two crops on smaller plots before or after the normal season of the crop, assuming quite correctly that off-season vegetables get better prices than in season.

The bottom has never believes in the possibility of any government to come to understand his problems and his ways of coping with them. They often evolve their own ways of maximizing their returns from small patches of land by substituting in part land and in part capital by intense labor and farm care.

The bottom deserves not only a pat on their back but substantial help. The way to help them is quite different from the way to help the TOP growers. The later involves cold storages, processing facilities, equipment subsidies and possibly price support. The TOP growers obviously have significant pull with politicians. The bottom is voiceless.

But the help that the bottom needs is of a very different order. It requires scaling down of farm implements, scaling down of packing sizes of good quality seeds, simple devices such as Varsha Shalas so thoughtfully created by the Himachal Pradesh government to help farmers protect their produce from getting wet in treacherous rains; subsidies on transport through small transport vehicles; and rayatu bazaars, which Chandrababu Naidu had started implementing long time back in undivided Andhra Pradesh.

However, being used to the neglect from every one, we do not think that the bottom will grudge the attention which the Prime Minister has promised to the TOP. That attention has shifted from six-lane highways to needs of the TOP is a good beginning. At some point in time, hopefully some one somewhere will try to some thing for the bottom as well!

Anish Kumar is part of the lead team at Transform Rural India Foundation. He was earlier a member of the leadership team of Professional Assistance for Development Action (PRADAN). Views are personal.

Anish Kumar is part of the lead team at Transform Rural India Foundation. He was earlier a member of the leadership team of Professional Assistance for Development Action (PRADAN).