Bringing more land under vegetable cultivation and using technology, farmers in Kashmir have made fresh produce available for the state in winter and for other states in summer 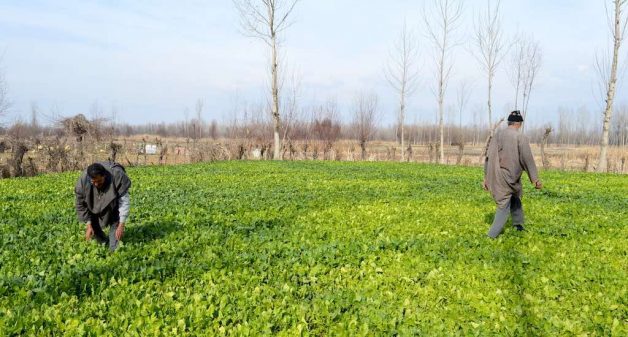 Farmers working in a vegetable farm in Ompora in Budgam ensure availability of fresh produce across the state in winter. (Photo by Athar Parvaiz)

In March last year, while visiting his ancestral agricultural land at Ompora in Budgam district, Farooq Ahmad Shah, a resident of Srinagar, was pleasantly surprised when a local farmer approached him and offered a handsome annual rent for a kanal (one-eighth of an acre) of land.

“He told me that he just wanted one kanal of land on rent for growing vegetables,” said Shah. The farmer had offered him a rent of Rs 30,000 per year with the assurance of revising every two or three years.

When Shah enquired further, he learnt that the farmer would be able to save about Rs 60,000 after paying the rent, by growing vegetables. Though he was happy about the farmer’s confidence, he could not strike a deal with the farmer as he had other plans for the land.

The farmers of Budgam are known for vegetable cultivation, with vegetable farms spread across many parts of the district. They work diligently in their farms and grow vegetables like, spinach, cabbage, potatoes, tomatoes, onions, peas, besides several others. The production has increased to an extent that they export the fresh produce to even distant southern states.

According to the statistics at Kashmir’s Department of Agriculture, Budgam district is the largest vegetable producer in Kashmir. During the Kharif or monsoon season, Budgam produces around 175 tons of vegetables, 25% of the 700 tons of vegetables produced in the entire Kashmir region.

An official of the agriculture department said that the huge potential for production of vegetables in Kashmir still remains to be fully tapped.

Javid Ahmad Bhat is ready to harvest his spinach crop whose dark green leaves have covered all of Bhat’s two-kanal vegetable farm. It took 45 days for the spinach crop to be ready for harvest. Bhat plans to grow cabbage in the land, after harvesting spinach.

“I grow vegetables four times a year on this land,” Bhat, who has two more farms of almost similar size at two different places, told VillageSquare.in. “It never stays idle.” Bhat earns around Rs 600,000 a year through vegetable farming.

Fayaz Ahmad, a farmer in Narkara-Budgam also works as a mason. “But, what I mostly rely on is the assured income from my vegetable farm of two kanals.” He said that he did not find work as a mason always, like in winter for example. 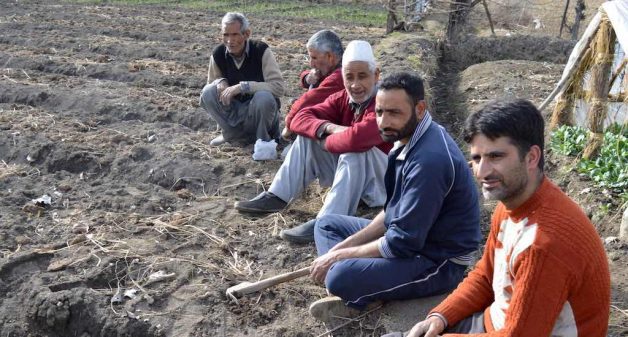 “My land helps me educate my three children, two girls and a son in local private schools,” Ahmad told VillageSquare.in. “I manage their school fee and other expenses with the money I earn from my vegetable farm.” Ahmad said he earned Rs 100,000 from selling vegetables of his farm.

For Mohammad Yousuf Paul, a 57-year-old farmer in the same village, one cow and a kanal of land, where he grows vegetables, are enough to feed his family of five. “The vegetables and the milk I sell, secure me enough money to feed my family,” said Paul. His farm accrued him over Rs 60,000 a year. His half-an-acre of paddy land fulfilled the rice needs of his family.

Reyaz Bhat, a farmer in Panzinara, about 12 km north-west of Srinagar said that he reared a herd of sheep with most of the fodder coming from his one acre of farmland. According to Bhat, his vegetable farm and his sheep ensure a steady income for his family. “The vegetables that I grow in my farm, fetch me around Rs 300,000 every year,” Reyaz Bhat told VillageSquare.in.

“It has become possible because the farmers have started using technology available for growing vegetables in controlled conditions, making organic manures and bio-pesticides and making good use of high-yielding varieties,” Parveen told VillageSquare.in.

Climatically different Kashmir valley has the unique distinction of making vegetables available to other states. Since vegetable production is rapidly increasing in Kashmir, the valley now exports vegetables to other states during summers.

Nath of KVDA said that hundreds of vegetable laden trucks are sent almost every day from Srinagar to Jammu and other states of India in summers. “We not only produce for our own consumption, we supply vegetables to other states as well.”

“We send vegetables like peas to states as far off as Tamil Nadu through air cargo,” said Nath. “Vegetable farming in Kashmir gives direct and indirect employment to over 100,000 people including vegetable farmers, vegetable sellers and transporters in Kashmir.”

“Being labor intensive, most members on a vegetable farmer’s family involve themselves in the cultivation process,” Nayeema Jabeen, a faculty member at SKUAST, told VillageSquare.in. “With good economic dividends, it plays a crucial role in their overall socio economic development.”