In an underdeveloped part of Jalukie Valley in Nagaland, the church-based Rongmei Baptist Association has gone beyond call of faith to help tribal communities uplift themselves through development interventions 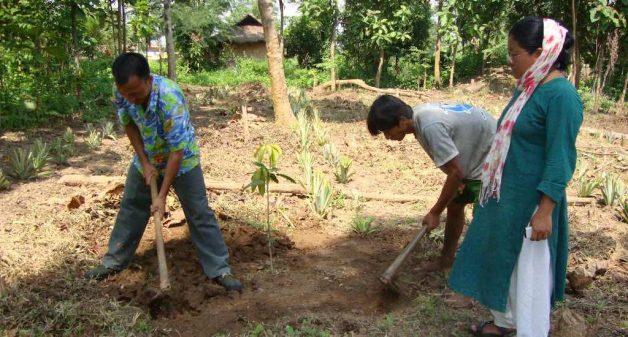 “We started our work in ensuring safe drinking water when a girl who had gone to a stream to fetch water was washed away in a flash flood,” recalled Akeina Gonmei. This tragic event was one of the incidents that gave directions to the works of Rongmei Baptist Association, where Akeina is the development secretary.

Akeina is probably the first woman from the Rongmei Naga tribe to have completed the Master of Social Work (MSW) course. After she finished her course from Nirmala Niketan, Mumbai in 1993, she had many career options, besides moving abroad. But she chose the development route, to work among her community in particular.

As the development secretary of Rongmei Baptist Association (RBA) for the last 18 years, Akeina, along with her husband Reverend H. M. Gonmei, has initiated a wide range of developmental activities. They succeeded in convincing RBA leaders that RBA’s work should not be confined to religious duties within the church. Their work among some of the Naga tribes has resulted in overall development of the community.

RBA is a church-based organization and is the apex administrative body for the Rongmei churches in Nagaland. In 1992, when RBA stepped beyond religious activities, the broad objective was to empower the rural people and reduce the rate of poverty in the region. After Akeina joined RBA in 2000 as youth secretary and development coordinator, RBA’s activities began expanding in multiple directions.

To appreciate Akeina’s work, it is imperative to understand the history of Nagaland. Before independence, the British had declared it an Excluded Area. The Naga people had almost no contact with the outside world. Headhunting practices were common till as late as the 1960s. Agriculture is still the main occupation for most of the villagers.

The most common practice of agriculture is jhum or shifting cultivation. There are more than 10 tribes consisting of Ao, Angami, Sema, Lotha, Changs, Yimchunger, Sangtam and Khiamniungans. Connectivity and lack of infrastructure are still major constraints for anyone working in Nagaland. One can imagine the situation nearly two decades back, when Akeina joined RBA.

As a young single woman, Akeina moved from Dimapur to Jalukie, a small town, about 50km away. The town in Peren district had very poor road connectivity and erratic power supply. There was only one private bus that plied daily between Dimapur and Jalukie.

Narrating her initial experience in RBA, Akeina said, “When I joined, we had no building; a handful of staff working from two rooms made up our office, besides a manual typewriter, an old cyclostyling machine and a scooter.” They shifted wooden benches in the office at night to make room for her to sleep.

Unmindful of the challenges, Akeina visited villages every day. Through the learning experience, she took comfort that she was working for the development of the community.

RBA has implemented a number of projects such as promotion of women self-help groups (SHGs), livelihood promotion, and skill building programs for youth, to name a few, each growing out of the community’s needs.

When RBA wanted to ensure access to safe drinking water, after the girl lost her life, Akeina noticed another aspect. Traditionally the dead were buried in the plot of land where the house stood. It had become unviable since population had increased and open spaces had shrunk. 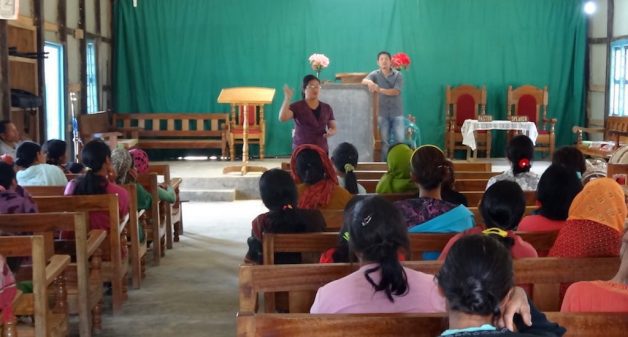 Besides taking measures such as enclosing backyard wells with concrete rings, Akeina spoke to the village council and got a piece of land allocated as the burial ground.

With agriculture being the mainstay, RBA encouraged farmers to move away from jhum cultivation that was becoming increasingly unsustainable, to horticulture or wadi cultivation, starting with pineapple orchards on hill slopes.

In the 1980s, the National Bank for Agriculture and Rural Development (NABARD) promoted wadi program in several regions of the country, including in Peren district, facilitated by RBA. They encouraged tribal families to plant mango and other fruit trees on degraded lands, to ensure regular income.

The self-help group-bank linkage program did not take off in Nagaland till 2000, in spite of several attempts. Despite NABARD’s persuasion, the commercial banks were reluctant to extend loans to women in SHGs.

When NABARD wanted to partner with a reliable NGO that understood ground realities and connected with the people, RBA was their obvious choice. RBA borrowed from NABARD, lent the money to SHGs and repaid all loans on time without any default.

NABARD and other banks found RBA’s operations transparent. Later, as a resource agency, RBA provided training to many NGOs in Nagaland who wanted to join the SHG-bank linkage program.

Traditionally villagers did not cultivate mushrooms, but collected them from the forest. During a visit to Thailand, Akeina saw mushrooms being cultivated using sawdust. RBA introduced the same among women in some villages.

Mushroom cultivation not only brings in additional income for the family, but the mushrooms offer a nutritious food supplement to women and children.

RBA has introduced better management practices in piggery, reducing animal mortality and increasing income. Women rear the pigs while taking care of household chores. The pigs consume the kitchen waste, thus reducing the solid waste load. Pork dishes being Naga delicacy and pork being imported from Punjab, this has proved to be a good livelihood intervention.

In the face of constraints such as lack of adequate technical expertise for wadi cultivation, RBA ensures that their programs have a reasonable impact on the community. Remaining accessible to the community, when not in a position to offer solutions, they guide the community to other resources, such as directing them to agriculture scientists in an instance of pest attack on crops.

According to Akeina, there is a perceptible change among the community and the church leaders, as a result of RBA’s development programs. RBA ensures that their programs encompass all, without any clan affiliations. “For us socio-economic program means a path to social harmony. We do not initiate any activity that does not promote harmony in the community.” Entire staff of RBA is drawn from the local community.

RBA’s activities are spread across 40 villages among 2,000 families in one of the most under-developed regions of Nagaland. RBA has successfully brought forward the secular developmental agenda under the aegis of the church. RBA’s experience in integrating faith and development offers insights to others travelling similar paths.

Ajit Kanitkar is a member of the research team at Vikasanvesh Foundation in Pune. Prior to this, he worked at Ford Foundation and Swiss Agency for Development and Cooperation, both in New Delhi. He taught at Institute of Rural Management, Anand, during 1992-1995.