A digital platform has helped women farmers living in the northern fringes of Sundarbans in West Bengal to sell organically grown indigenous rice and other produce directly to customers, helping them to book higher profits 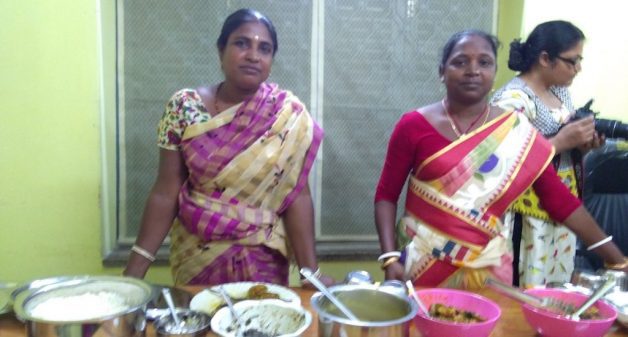 It was a Women’s Day celebration with a difference at the Kolkata office of a multinational software company. Women farmers from distant villages had arranged for lunch, cooked with the varieties of indigenous rice that they had grown organically. A sale of their produce was held after the lunch. It was an innovative way of marketing their produce.

The organic food market, with a projected compounded annual growth rate of 25% up to year 2020, finds increasing followers, as people become health conscious and appreciate quality food. But how do farmers who cultivate organic crops reach the organic food market? Amar Khamar, a digital initiative, connects a clutch of small and marginal farmers in the Sundarbans who grow long-forgotten traditional rice varieties, enabling them to sell their produce directly to customers.

Speaking to VillageSquare.in, Sujoy Chatterjee, development consultant and founder of Amar Khamar said, “Villages have a plethora of training programs regarding production techniques, but the crucial last-mile market connectivity that helps farmers realize a remunerative price for their produce is lacking.”

Amar Khamar, meaning my farm, aims to build the crucial forward and backward linkages that will make a social enterprise viable. The platform also attempts to ensure distributive justice for a broad base of small producers, so that they can sell their produce after taking care of their own food security.

Right now, Amar Khamar offers on its online platform three products — rice, pulses and turmeric — that come from three nodal outfits that are non-governmental organizations. The farmers charge a small premium on the produce, which is lower than what departmental stores charge.

The algorithm of the software is set in such a way that when a consumer orders a product, the order gets communicated to the farmer of a group that has not received orders for a certain period. The farmers arrange for the order to be delivered through a private courier within four working days. Since July 2017, the farmers have been delivering even in less accessible areas without a hitch, not missing a single order.

A majority of the 400 farmers of this initiative is women. The biggest of the three nodal organizations is Mrittika Prayas, with a base of 36 self-help Groups (SHGs) and 331 women farmers located in Sandeshkhali II block spread over Korakati, Khulna and Manipur gram panchayats in North 24 Parganas district. 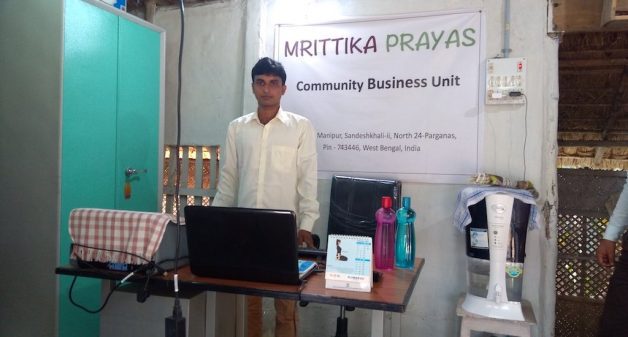 As for the quality of the organic produce, first the farmers guarantee the veracity, and thereafter the nodal agency that processes the products. Besides, the government of India has a formal process of guarantee for small farmers. The Participatory Guarantee Scheme for India offers remuneration to groups of farmers who opt for organic certification. The farmers of Hingalganj block have got their produce certified.

Farmers, especially those from Hingalganj, have always been growing organic crops, saving seeds for the next season. The present initiative helps them do it in an organized manner. “The reason for going organic was not because it fetched a better price, but because it resulted in cost savings,” Jayanta Sarkar, who coordinates with the farmers after they get the orders, told VillageSquare.in.

Farmers do not sell the entire harvest to Amar Khamar, but to wholesalers and retailers as well. “But the readiness to sell to Amar Khamar is because of the higher margins,” said Jayanta Sarkar.

The profit is divided among the producer farmer, the nodal agency and Amar Khamar for the cost of operation. A committee of the respective nodal agency decides this by mutual agreement, taking various aspects into account.

Experts in each field train the farmers, one among them being Mukut Raychaudhuri, a fisheries expert skilled in mobilizing farmers and initiating them into organic farming. “He and Sundarbans organic farmer Umapati Sarkar play a key role in training the farmers,” Santanu Chacraverti, who teaches ecosystem management, told VillageSquare.in.

The center fixes the training calendar in consultation with the trainees. It is usually done at the time of the day when the fieldwork is minimum. They avoid sowing and harvesting seasons as the activities demand maximum time at the field. Also, the trainers would be engaged in their own fields. They also avoid training on festival days. 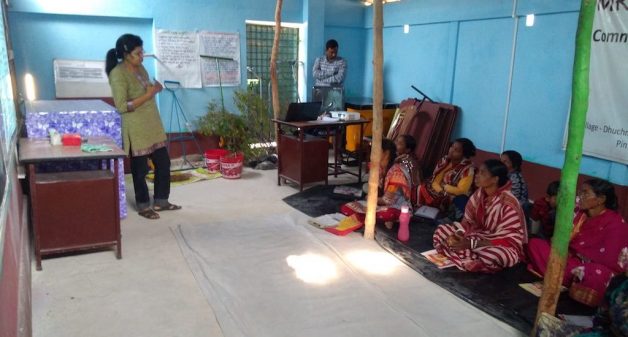 After the program, the trainers test the extent to which the farmers have learnt. “Compared to the other trainings, this is field-based and also market-linked,” Mitali Sarkar, a woman farmer and a trainer, told VillageSquare.in. As the trainers supervise the trainees at the field, other farmers also get enthused to participate in subsequent training programs. The promise of the ready market is another motivating factor.

A differentiating aspect of this social enterprise is that the consumer knows the name of the farmers’ group that produces the item that has been ordered. “This linkage helps inculcate a sense of dignity in the farmer and participate with even greater motivation in the farming process,” said Chatterjee.

Amar Khamar helps connect the rural economy with the mainstream economy. The agricultural training, an enabling digital platform and a sustainable technology that incentivizes farmers to entrepreneurship with direct access to consumers, make this a formidable initiative.

Amar Khamar is a scalable model that plans to include more nodal NGOs and farmers on its platform to ensure market connectivity. Since its launch, the peak sale has been 200 kg of rice a month at Rs 90 per kg. With the harvest of a crop, the farmers expect a boost in sale. The rate of success and scalability in the coming days will indicate the sustainability of the model.

Dhruba Das Gupta is a writer based in Kolkata.