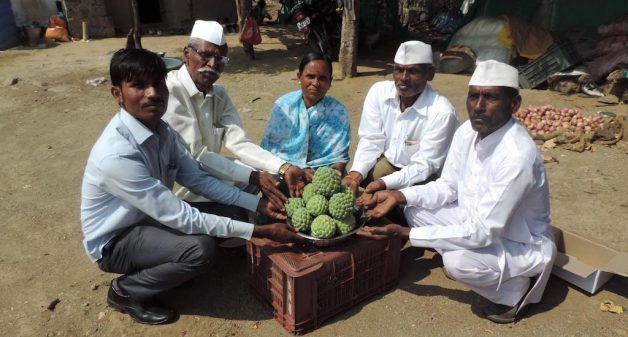 Farmers in Pimpari Dumala, with a sample of the custard apple they harvested. (Photo by Hiren Kumar Bose)

Hoardings along the dusty road leading to Pimpari Dumala, off the Ranjangaon-Ganegaon Road, stalls selling food items and scores of white — the most preferred color in rural Maharashtra — sedans parked all over the place, reflected the festivities going on in the village.

The decades-old local temple in Pimpari Dumala, about 60 km from Pune, was festooned and lavishly decorated for Shivratri. “Hundreds from neighboring villages and Pune visit the Somnath temple on this auspicious day,” said Ramesh Khaladkar, a postgraduate in agriculture.

However, the village in Shirur taluk has been gaining in popularity for a different reason – custard apples! The fruit has ushered in affluence to the 250-odd households in the village.

The village acquired its name from the scores of pimpari or banyan trees that it once had; only a few survive now, reaching majestically to five stories high, having witnessed 60-odd summers obviously.

Majority of the villagers are from the Maratha community with a handful of Mali, Dhangar and Dalit families. Irrespective of the community that they belong to, all landholders grow fruits like custard apple and pomegranate, besides onion as an intercrop.

However, it is custard apple that has brought the villagers riches. Growing them is reason enough for the educated among them not to look for livelihood elsewhere, despite the proximity of the Ranjangaon Industrial Estate that hosts manufacturing units of many well-known Indian and multinational companies.

Custard apple (Annona squamosa) or sitaphal is a woody, semi-deciduous tree that grows unattended in the semi-arid zones of several south Indian states. Introduced in Pimpari Dumala in the early 80s, it now covers more than 100 hectares. 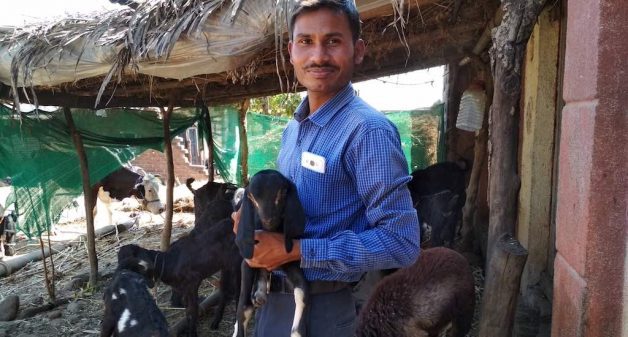 “It was one Bajirao Jagtap, a landlord who once owned almost the entire village, who began commercial cultivation of custard apple,” Bhanudas Pingale, the deputy conservator of forest of Yavatmal Forest Division, who was home to participate in the Shivratri celebrations, told VillageSquare.in. Jagtap is reported to have taken a vehicle full of custard apples to the market in Pune every day during the harvest season.

Though custard apple is grown widely in this region, it is a rarity for an entire village to take to it, and competing among themselves to have a better harvest, while continuing to use organic methods of cultivation.

Being a hardy fruit tree, custard apple thrives naturally in rocky terrain with shallow, gravelly, well-drained soils. A cross-pollinated crop, it has wide variations in forms and sizes of fruit as well as the color of the pulp.

The fact that it is called sitaphal in all major Indian languages, besides as ata in Bangla and sharifa in Punjabi is proof that it grows in varied climatic conditions.

A drought-tolerant crop, it can remain green and healthy even during protracted dry spells. Farmers said the trees do not need much water or expensive fertilizers and pesticides. It is free of most pests and diseases, but for its susceptibility to mealy bug attack that can easily be controlled by suitable botanical insecticides.

The medium-sized fruit of 250 gm to 500 gm with sweet pulp and pleasant aroma contains anti-oxidants like vitamin C and is high in potassium and magnesium.

Maharashtra leads the country in custard apple production, with 92,320 tons, followed by Gujarat, Madhya Pradesh and Chhattisgarh. It is also grown in Assam, Bihar, Odisha, Rajasthan, Uttar Pradesh, Andhra Pradesh, Telangana and Tamil Nadu. Incidentally, in Gujarat it is grown mainly as a boundary crop; it also grows widely in the forests.

In Maharashtra, more than 50,000 farmers grow the fruit in Buldhana, Bhandara, Gadchiroli, Solapur, Pune, Aurangabad, and Chandrapur districts. Like most custard apple growers in the state, Pimpari Dumala too grows the Balanagar variety that gets its name from a village in Mahbubnagar district in Telangana.

Incidentally, Mahbubnagar once famous for its custard apples now faces a decline in cultivation due to the conversion of land for real estate, and poor rainfall. “Balanagar is the most preferred variety among custard apple growers due to its aroma and taste,” Shyam Gattani, president of Maharashtra Sitaphal Growers Association, told VillageSquare.in.

Solapur-based innovative farmer and chairman of the Pune-based Custard Apple Producers Training & Research Board, Navanath Malhari Kaspate, has introduced the NMK 1 variety, known for its size.

In Pimpari Dumala custard apple is grown using drip irrigation technique. The yield is around 12 ton per acre, which is close to the national average. Each grower earns between Rs 1.5 lakh and Rs 3.5 lakh per acre.

“We have recommended doses of plant growth promoter and sowing of bajra in the month of February to maintain the field’s humidity, thus creating a microclimate for a good harvest,” Shrikant Shantaram Kulkarni, horticulturist, Arid Zone Farming, Mahatma Phule Krishi Vidyapeeth (MPKV), Rahuri told VillageSquare.in on the possibility of increasing the yield. 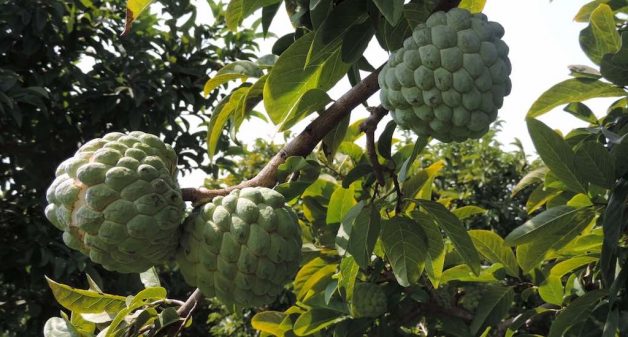 During the harvest season, each member of the family is engaged in picking, grading and packing the fruit in corrugated boxes, readying it for its journey either to Mumbai or Delhi. In 2017, the village produced around 3,000 tons of custard apple, dispatching around 180 tons to Delhi by air, between late September and November, receiving a handsome price of Rs 132 for a kilo.

“Each plant bears around 60 fruits and farmers are able to earn a profit of Rs. 1.5 lakh to Rs. 2.0 lakh a season,” Khaladkar, who grows custard apple in a 1-acre plot and secured new markets through his website and social media page, and brought buyers to his village from places as far as Delhi, told VillageSquare.in.

After harvesting the custard apple, farmers grow onion, harvesting it in February. The affluence among the villagers is obvious with every household having a motorcycle or a car. Indicating the impact, “We used to have public transport bus service from our village to Ranjangaon but it was discontinued as villagers preferred their own vehicles,” Dyaneshwar Pingale, an agriculture graduate who tends to his family’s 4-acre plot and lives with his parents in the newly built two-floor house, told VillageSquare.in.