Although digital networks have penetrated into remote rural areas, their use is still limited among villagers due to a variety of reasons, the shortcoming of local teachers not the least among them 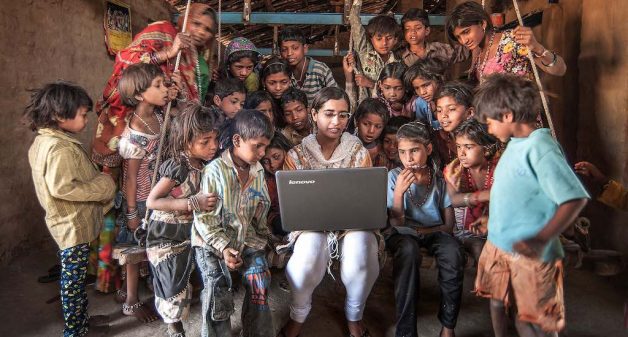 The use of computers and the Internet is not yet widespread in rural areas. (Photo by Chetan Soni)

Aside from occasional hassles connected with scandals about data breaches and its manipulative uses, digital is today the acclaimed way of life. It is therefore important now to be digitally included. A rough and ready definition of digital inclusion would be that one is able to obtain products and services through operations in the digital world with the bare necessary physical exchange as and when called for.

Officials go hoarse singing the virtues of the digital world. Digital exchanges cut time, red tape and opacity, it is said. And it is not all in the air. One can easily see these virtues in cases like doing railway reservations where they have worked for a long time now. There is a strong thrust by governments, certainly at the Centre, and in quite a few states as well, to bring in the virtues of the digital world in making administration more open, pro-people and easy.

The government of Madhya Pradesh has done a huge amount of work in this direction and so have Maharashtra and possibly many other states. I for one was thrilled to see on my computer screen the evidence (in the Form 7/12 document) of ownership of a small plot of farmland, which I have in Maharashtra. I really feel the promise of digital era governance is not hollow. Not in the least.

However, I am among the relatively smaller group of people who find it easy to be digitally included. To see the extent of digital inclusion and what prevents it from becoming a reality for all people, including those not privileged like me, we have launched a research program.

Students at Indian Institute of Management, Udaipur, did the first set of exercises. These students contacted over 1,250 persons in 104 villages across the districts of south Rajasthan. They were told to explore the extent of and barriers to digital inclusion for residents of these villages. Most of these villages are nested in the bewildering landscape of prolific but short and small hillocks of the Aravalli range. As a result, the farmlands are quite undulating.

The region is in the semi-arid tropics and receives an average of 600 mm rainfall in some 17 rainy days in a year. Maize is the principal crop of the Garasia, Patelia and Meena tribals and the Rajput and Dangi Patel farmers who till the lands here. The region scores low on human development indicators, with female literacy as low as 30% in some villages.

It is amazing to see that virtually all watercourses are privatized through encroachments. Those whose wells have a little water grow some wheat or some other crop either right there or in nearby plain lands. The entire region survives substantially on wages and remittances of literally lakhs of men who migrate each season to Ahmedabad, Surat, Mumbai and other locations.

The students reported that in all the villages mobile telephony had reached near saturation levels and data networks of variable stability and strength was available in a majority of villages. A village in this part of the world tends to be divided in several hamlets, often separated from each other by a long distance. Thus one village could mean 300-400 homes scattered in 5-6 habitations spread over 10 sq. km.

Due to the hilly undulating terrain and inadequacy of telecom towers, network strength often varied even within the same village. Students reported presence of strong 4G networks in quite a few villages. Yet, simple feature phones good for voice calls and text messages only overwhelmingly dominate. The proportion of smartphone owners in some villages is as low as 2% but rarely exceeds 40% of all mobile owners in any village.

Very few villages had any desktop computer, laptop or a tab. Some villages were provided with an E-mitra Kiosks under a public-sponsored scheme. This kiosk is meant to provide facility for reaching digitally enabled information and services to the people. It appears that people neither know what is available on the net nor feel particularly disadvantaged by this ignorance.

Physical distance between their homes and bank branches has not become shorter nor the net banking facilities made available to a large majority of customers despite the wide-scale financial inclusion under Bhamashah scheme, a state program for direct transfer of social benefits. As a result, few people have ever used the web-enabled services. Those who use any thing digital seem to be content with messaging on WhatsApp, streaming videos or songs from YouTube and infrequent chats on Google or Facebook.

Principal barriers to digital inclusion appear to be poor literacy level; near complete absence of facility with English; poor awareness of what is available on the net; limited spread of skills of using the net by inserting login id or passwords and even less ability to surf using key words; the possibly experienced based perception that despite notional digital access, the very analogue greasing of palms would be needed before benefit under any government scheme can actually be realized; and hence very weak manifest demand for digital inclusion; and a perception that data packages are exorbitantly priced.

Surprisingly, the poor quality of network or lack of access to smart devices does not feature in the list of barriers.

The preliminary inferences of this research can be summed up in these lines: the telcos have delivered. Despite their English fixation, the techies too have been delivering quite well. Thus, at least a significant part of the system has gone digital. But citizens have not become enabled due to illiteracy, poor knowledge, poverty, etc.

It is the pathetic past performance of teachers, which holds back digital inclusion. And that is the travesty: the hopelessly analogue, old and non-performing teacher and his even worse school blocks the spread of benefits of digital inclusion to the populace at large.

One message is clear: the system has gone digital for those who can use English. For the ordinary rural people, English seems to be among the principal barriers to digital inclusion. That surely can be corrected if public service providers and banks made their websites navigable in vernacular. Will they do it or remain slaves to post-colonial snobbery is a moot question.