A move to replace 15,000 mechanized boats in West Bengal’s waterways and a floating market in Kolkata have brought hope to the wooden boat makers of Hooghly, who have been languishing for want of steady demand 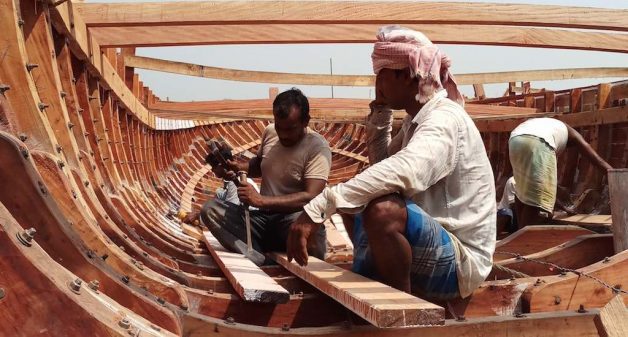 Number of boat makers in Balagarh has come down with decline in demand for wooden boats. (Photo by Gurvinder Singh)

Sheikh Kasem of Balagarh in Hooghly district finds it difficult to recollect what types of wood he used to make boats. What he however remembers that how he skillfully transformed logs of woods into sturdy boats that have sailed the rivers for years. He made enough money as a boatwright to raise his five children.

Now the 60-year-old finds it difficult to arrange for one square meal a day for his family. He suffers from severe liver infection and doctors have advised him complete rest. He refuses to pay any heed to it.

“My family would die of starvation if I don’t work,” he told VillageSquare.in.“Taking rest is a luxury that I cannot afford.” He said that he toiled for 12 to 14 hours a day and still had to sleep on an empty stomach occasionally.

“Those of us in the boat-making business are staring at a bleak future,” said the sexagenarian who looked older than his age, overburdened by constant worries. Kasem is one of the hundreds of boat makers of Balagarh who are in a similar predicament. The centuries-old craft of making wooden boats is slowly dying. With a recent government intervention, the boatwrights hope for a turn of the tide.

Boat making has been a thriving business in Balagarh since several centuries, according to Swarup Bhattacharya, a researcher on boats and curator of the Maulana Abul Kalam Azad Museum in Kolkata. “Saptagram situated a few kilometers away from Balagarh was a thriving port during ancient and medieval times,” he told VillageSquare.in. 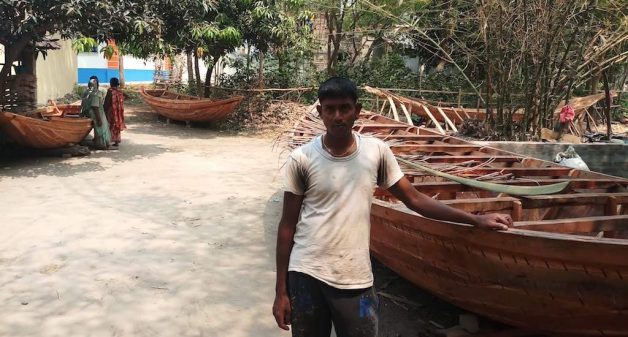 Sheikh Khokhan, a young boat maker, runs his household with his wife augmenting the family income. (Photo by Gurvinder Singh)

Whenever anchored vessels needed repairs, workers from Balagarh attended to them. “It appears that they slowly learnt the art of boat making and started building boats as they found the trade profitable,” said Bhattacharya.

With boat-making skills being passed down generations, the boatwrights of Hooghly district earned a name for themselves.

“I used to sell four or five boats a month earlier but now it is difficult to sell even one per month,” Sheikh Arjizul Haq of Das Boat Builders, who has been in the business for more than four decades, told VillageSquare.in.

It is more than two months since Sheikh Kasem’s son, 35-year-old Nasem, sold a boat for a paltry sum of Rs 20,000. It has been a steady decline for the boat makers. They began to witness a slump in demand when road and rail connectivity improved and boats were no longer the sole mode of transportation.

“It’s true that government has now built bridges and transportation has improved, but there are other reasons too,” 40-year-old Kesto Sarkar, who has been a boat maker for over two decades, told VillageSquare.in.

“It’s obvious that demands have decreased but labor crunch is also a major issue,” said Supriya Barik, whose father Nemai Chand Barik was one of the oldest and largest boat makers of Balagarh. Sarkar cites the time that a person takes to learn the craft and the salary he can earn also as contributing to the decline in trade.

“A greenhorn earns Rs 50 after working for several hours under the blazing sun, asstructuring the boats requires an intricate understanding of the waters including the depth of the river, current, wave and wind velocity,” he said. However, he can earn Rs 250-Rs 300 a day by working as laborer in a factory or as a mason. It takes many years for a boat maker to achieve perfection to command Rs 600 per day.

True to Sarkar’s words, many young men have taken up alternate livelihoods. The village that boasted of over 3,000 boat makers once, now have about 800 of them, working in 25 industrial units involved in boat manufacturing. Several of the male members of the boatwright families have already migrated to other states to earn money.

“Several of my friends have gone to other states, but I can’t as I have a small son and my wife cannot manage alone,” Sheikh Khokhan, a young boat maker told VillageSquare.in.

But their dreams sound a death knell for the boat making industry that has remained an integral part of their lives for several generations.

When Nasem sold a boat for Rs 20,000, he incurred a loss. “I had to mortgage the family’s ornaments to arrange for money to build it,” he told VillageSquare.in.They sell with the hope that the next deal would be profitable. “After all, we need cash to work and banks don’t give us a single penny as they fear that we would fail to repay the loan,” he said.

Khokhan manages to run the house as his wife tailors clothes. “With each passing day, it is becoming increasingly difficult to survive on boat making alone,” he said.

The small boat makers are no doubt finding it hard to sustain themselves, but the condition of the bulk manufacturers is no better either. Barik said that they were passing through hard times and just managed to survive.

“Monsoons are good business seasons for us as boats are much in demand in flooded areas,” Barik told VillageSquare.in.“Even government purchases them for rescue operations.”

Boat makers used only salwood earlier because of its sturdy quality but now they use babla, kapur and shirishtoo. During monsoons, some fly-by-night boat builders use inferior quality wood as they lack funds to buy good quality wood. 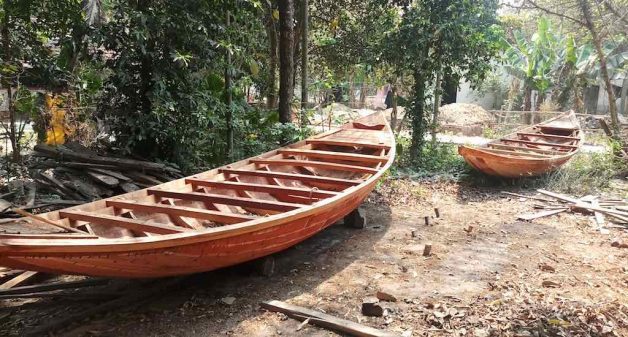 With state government launching a floating market, the boatwrights are hopeful that their boats would be in demand. (Photo by Gurvinder Singh)

The boat makers are hopeful that the state government’s decision to place orders for wooden boats for the recently built floating market in Kolkata would save the dying industry.

The government’s decision to replace 15,000bhutbhutis – as the mechanized country boats are called – plying in the state waterways, under its Jaldhara project holds additional promise. The project aims to prevent accidents due to capsizing of country boats. The government also offers Rs 1 lakh subsidy to boatmen replacing their bhutbhutis.

Das Boat Builders of Balagarh is one of the companies that have got bulk orders under the government scheme. “I am equally concerned about the small boat makers who are losing their livelihood because of decline in demand,” Haq told VillageSquare.in.“They should also be taken care of as they are the pride of Balagarh.”