By popularizing the system of root intensification and introducing sustainable agricultural practices, Anil Verma has brought a positive change in the lives of marginalized farmers in Gaya 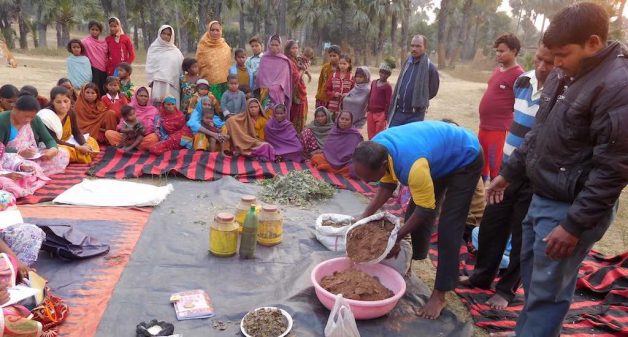 To enhance yield through root intensification, PRAN has introduced sustainable agricultural practices that farmers can implement easily. (Photo by PRAN)

“I want Preservation and Proliferation of Rural Resources and Nature (PRAN) to be a sustainable organization that would serve the oppressed in Bihar,” said Anil Verma, the founder of PRAN.

Verma started his work in Bihar with Professional Assistance for Development Action(PRADAN), a non-governmental organization, executing a special project of Bihar State Rural Livelihoods Mission, also known as Jeevika. During the project, he observed the appalling conditions of the marginalized people. With a desire to work towards their upliftment, Verma started PRAN in 2012.

Since then, PRAN has reached out to about 25,000 Scheduled Caste (SC) and Other Backward Caste (OBC) households in 300 villages across 11 administrative blocks in Gaya district and four blocks in Nalanda district.

Verma has popularized system of root intensification (SRI) in rice, wheat, mustard, maize and vegetable crops, besides popularizing non-pesticide management (NPM). He is best known for the extraordinarily large yields of rice obtained through SRI method.

Under PRAN’s guidance, the community’s highest recorded yield is 19.10 tons per hectare. The popular media credits Verma for the world record of over 22.4 tons per hectare of paddy that farmers harvested in Nalanda in Bihar.

Soon he found that his ardour to contribute to the development sector exceeded his scientific bent of mind. A year later, he quit his job in ICAR, foregoing the perks of a government job and joined PRADAN as an executive. 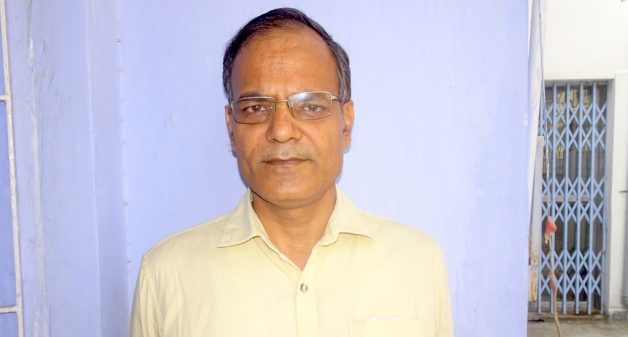 Switching from science to development, Anil Verma has been bringing about change in the lives of marginalized farmers in Bihar. (Photo by PRAN)

After an initial stint in Jharkhand and Madhya Pradesh, Verma moved to Gaya in Bihar to popularize system of rice intensification (SRI), a Jeevika project. After working among farmers for a few years, Verma felt a strong inclination to continue his work with them. As PRADAN’s work was more broad-based and Verma wished to focus on SRI, he started PRAN.

The most important principle in system of root intensification (SRI) that Verma introduced is to allow the roots of plants to have enough space to grow to their full potential. This requires spacing between plants and between rows.

Given the optimal microenvironment, the yield potential of paddy through SRI is very large. It was not a surprise for Verma, when the yield of paddy went up to 19.1 tons per hectare, when the average yield in SRI is about 9 to 12 tons, and that in non-SRI method is about six to eight tons.

Verma has applied SRI principles with great success and on a significant scale to wheat, mustard, sugarcane and several vegetables. In SRI method, reduction in seed cost is the most visible gain for farmers.

For instance, instead of 100kg of paddy seeds for a hectare, a farmer needs only 8kg in SRI method. With the need for other measures for better yield, Verma has introduced many sustainable agricultural practices.

Verma works mostly with Mahadalits, as the most marginalized in Bihar are called, and other marginal farmers whose land, if they have any, are mostly unproductive because of location, slope and types of soil.

Farmers have little, if any, investible capital, but they have abundant labor in their own household. Keeping such constraints and resources in mind, Verma chose to introduce natural insect and pest management, besides natural nutrient management on the farms.

PRAN teaches the participating farm households to prepare manure, growth regulators, insecticides and pesticides. Verma has documented preparation of these concoctions. The natural ingredients are locally and easily available, often within the farm.

The pest and insect control preparations are called astraor weapon, and the growth facilitators are called amritor nectar. “When we adopt sustainable practices and integrate them with  SRI, we get sustainably grown high yielding crops,” said Verma.

Weeding is an important part of the farming process, especially in SRI method. The weeders in use were not effective since they had fixed width. As new shoots come up and plants grow, the space between rows shrinks; running a weeder of a fixed width between the rows becomes difficult. 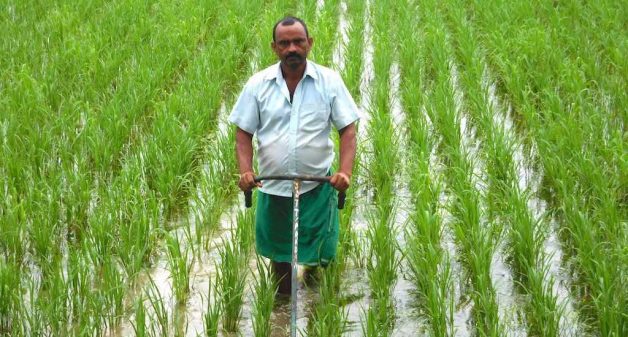 With the help of local ironsmiths Verma developed a weeder with three adjustments – the widest to be used when plants are small, the second one when they are about 15 days old and the narrowest when they are a month old or older.

Verma has developed other implements such as manual and mechanical seeding machines, and a chopper for cutting sugarcane nodes, to help farmers carry out the farm activities effectively.

Ahar pyne, the traditional irrigation systems of Bihar are now in disrepair. Even if functional, the beneficiaries were those who had lands along a pyne or in the command area.

Irrigation using 8horsepower (HP) diesel pumps was common. But the operation cost was high. Getting diesel and maintaining the pumps were difficult. With limited electric supply, PRAN installed 5HP solar pumps costing around Rs 5.5 lakh, through a loan-based model for a group of 22 marginal farmers.

The Dalit household on whose land a bore well is sunk has to give in writing, in a legally binding form, that neither he nor his heirs will claim the bore well as theirs. PRAN has implemented eight such schemes. Verma believes that it is better to implement such projects with loans, rather than waiting for government support.

Verma has evolved a unique style of promoting new agricultural practices. His extension training workshops start with mystique songs in either local Magahi language or Hindi.

The songs, set to popular tunes, often draw  from Hindu philosophy. Most of the instructions regarding farm practices are in the form of songs. Women participants sing them at the start and end of each meeting.

Verma draws a philosophical similarity between human development and plant development. “While SRI is about strengthening roots, as living entities, shouldn’t our own roots become strong?” he said. We need to make our family roots and our own social roots very strong, according to Verma. He advocates focusing on doing our duties well, for things to change slowly.