Women farmers in Manipur, who play a significant role in the state's agriculture, are struggling to grow crops in an increasingly hostile environment of north-east India 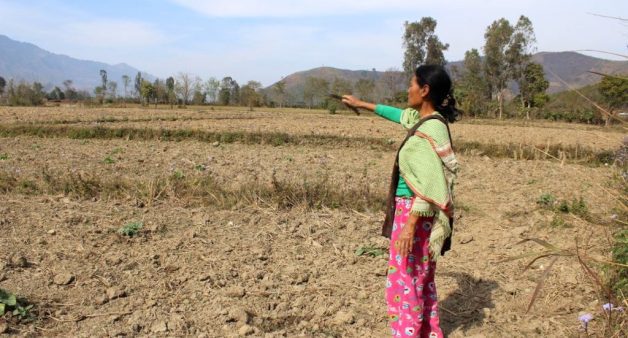 Hmouki, a farmer in Manipur, is worried about feeding her family during the dry season. (Photo by Ninglun Hanghal)

It is that time of the year when the weather is dry and windy. Hmuoki has to work even harder than usual to water and fertilise her four acres of farmland on the banks of the Khuga River in Churachandpur district of Manipur, north-east India.

Hmuoki struggles to ensure her family has enough food to eat during the dry season, which begins in November. From November till March, she plants crops like mustard, pumpkin, varieties of peas, beans, ginger and turmeric. She also supplements her food by working on farms in the hills surrounding the village, by going to Jhum fields or to collect wild fruits or herbs.

Women like Hmuoki play a major role in agriculture in Manipur. There are a large number  of women farmers working in the state, suffering from protracted conflict between authorities and armed groups. These women are also on the front line of climate change in the north-eastern state, where erratic rainfall, floods and higher temperatures are making daily life more difficult for rural farmers.

In mid February, a small group of women farmers gathered at Hmuoki’s home with a team from the civil society organisation Rural Women Upliftment Society (RWUS) to talk about their experiences in the fields and the changes they have witnessed in recent years. Hmuoki lives in Saidan village, 5 kilometres from Lamka, the main town in the district.

February is the time when women prepare for Jhum cultivation – a traditional slash and burn agriculture technique used widely in the hills of Manipur. The women are also seeing more random forest fires, set off by people who want to hunt wild animals. This causes huge damage to the land. Burning for Jhum preparation, however, does not damage soil fertility or cause environment degradation, argued the women. For Jhum preparation a small forest area is cleared, and twigs, branches and waste from the clearings are dried and eventually burned. The ash actually helps the make the soil more fertile.

Forest fires also affect their water sources – natural springs, which are slowly shrinking and drying up.

For many years now certain areas in the forest surrounding the village have been declared a “forest reserve” by the village authority (under the Chief) to preserve its resources, mostly for fuel and wood. “Due to this we had to even go farther for our Jhum cultivation,” said Thiengi, a women who dropped into the meeting on her way to the Jhum fields. “Now our Jhum cultivation field is very far from our village,” she said. There is no time rest, as she goes to Jhum fields about an hour’s walk away, to get herbs and other edible leaves and plants.

Too little, too much water

The women dread the summer, when water will be really scarce. Saidan village, with over 100 households, has three public water reservoirs, but the women say this is insufficient. Rainfall, the main source of water for domestic use, has become sporadic and this sometimes leads to drought. 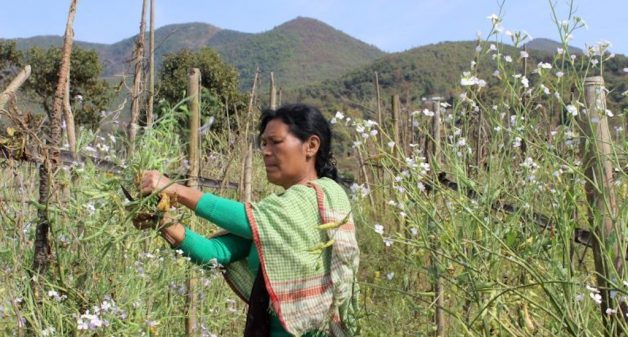 The women have also seen more frequent floods over the past decade. Floods become a major hazard during the monsoon. “My field/ farm was frequently destroyed by flood, damaging all crops in monsoon,” said Hmuoki. This is one reason why she works persistently during the winter months, struggling hard to keep her farm in good condition, so as to extend the crop-growing season.

Water for domestic use and for agriculture and irrigation is a key concern. The burden of collecting water falls on women. Besides the drying of springs, one of the major causes of water scarcity is the lack of snowfall. “Ten or twenty years back we had snowfall in winter. There is no snowfall now,” explained Hmuoki. “Snow melt makes the soil wet and fertile”.

Therefore women farmers like Hmuoki have to put even more effort into raising their crops, which is their main livelihood. At the moment, her farm is on banks of the Khuga River, which provides irrigation. But Hmuoki is worried. The Lanva, a tributary of the Khuga that runs through Lamka town, has completely dried up during winter – though it still floods causing havoc during the monsoon.

The summer months are increasingly hot, said the women from Saidan village. February, once upon a time a cool, breezy month, was already warm and sultry this year. Though rural villages in Churachandpur have to bear the summer heat without amenities, in Lamka ceiling fans and standing fan have become a necessity. In peak summer, temperatures in Churachandpur have reached over 30 degrees Celsius in recent years. Record temperatures in Manipur reached 35.6 degrees Celsius in April 2014. Many families in Manipur have also fitted air conditioners at home. These changes have been distinct in the past few years, compared to the usually pleasant and moderate climatic conditions in Manipur.

Rising temperatures have made it more difficult to preserve seeds. Traditionally, seeds were preserved by drying them out in the sun or above fireplaces and keeping them in bamboo containers. In past generations seeds would be planted directly in the soil. Now seeds have to be germinated first with manure and water in nurseries at home before being planted in the soil, to ensure crops grow well.

The hard work doesn’t end there. Once the crops grow, they come under attack from a growing number of insects and other pests. “These days we buy and use pesticides and fertilizers, our home-made manure are not sufficient,” said Hmuoki.

It’s not only crops. Mangoes, one of the common fruit plants in Churachandpur, for instance, are vulnerable to infection, said Thiengi. “Crops like peas are impossible to grow now without insecticides and pesticides,” she said.

Plants and fruits that were once delicacies for the locals have slowly disappeared. One example is the zawngtah or “stink bean” (Parkia speciosa). The bean trees have slowly dried up and been infected by pests and the price of the beans has gone up in recent years. The plant used to grow in the wild as well as being cultivated.  Now the beans have to be imported from Moreh, a town and trade hub 270 kilometres away from Lamka on the Indian-Myanmar border.

Farming has become a real struggle for these women in Manipur. They want to take advantage of recent developments in technology and modern agricultural techniques to boost their productivity and experiment with new ways of farming. They also hope to find alternative ways to earn income. For instance, introducing new varieties of climate resistant seeds, or new varieties of crops, such as pulses.

It is rural women, particularly farmers, who see and experience climate change, said Mary Beth Sanate, secretary of the Rural Women Upliftment Society. They are the ones who are preserving natural resources, but unfortunately policymakers do not consider their knowledge and skills.  “Women are not part of decision making bodies, be it at the local level, or in traditional or state bodies,” said Sanate.

This article was first published in thethirdpole.net