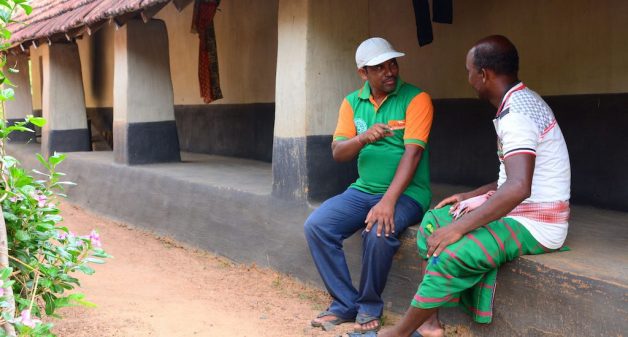 How do you define success and failure in the context of rural development? (Photo by Prasenjit De)

Most of rural development work occurs in a situation of numerous interacting social and economic conditions and involves engaging with human behavior, aspirations and responses. The intervener — in his frame of reference and beliefs about what constitutes social good and how things are related — largely defines the desired results of any development intervention.

The relationships between what the intervener does, how people respond to it, what short-term results are produced and how they lead to lasting consequences are complex and not definitive. As a result, neither the intervener nor any external observer can say with certainty whether an intervener has succeeded or failed in his intervention.

It is in this backdrop that Vijay Mahajan, founder of livelihood promotion institution BASIX, co-founder of PRADAN, which works wit India’s rural poor, and one of the most original and fertile brains of our time, used the terms “succlure” and “faiccess” in a recent talk which he gave at Bangalore.

As you can see, these terms have been coined by differently juxtaposing the alphabets in the common words success and failure. To make the intent clear to ordinary mortals like me, Vijay said that the second term is phonetically “fake-cess.”  While I borrow these terms, I am reinterpreting them in the context of rural development to suit my purpose and hence cannot hold Mahajan responsible for this column.

To me, succlure is an overpowering lure for success and all that it brings: name, fame, and pursuit of wealth. In our world of huge non-performing assets of banks and loan defaults, the moral hazards of succlure in the overall social context are familiar and prominently contemporary, so one need not elaborate on them.

Let me turn to more insidious consequences of succlure. This succlure may at times be so strong as to warp our rationale and lead us to an unstoppable flow of wishful thinking. We may assume easily that what is true for one unit is obviously true for one thousand units and with a bit of effort true for tens of millions. In effect, one mentally converts the real world into an Excel sheet and assumes that what has happened in one tiny cell can be replicated in the entire sheet by the mere act of dragging the cursor down.

The initial success and a great deal of convenient thinking can lead one to make grandiose plans. And if one has both, the persuasive ability of the salesman selling fridges to Eskimos and a profile that intimidates and dominates others, one may be able to make gullible governments or donors swallow these plans and make massive commitments of resources.

Perhaps one of the pithiest examples of succlure is a plan prepared by a renowned agricultural economist of this country in the late eighties. He suggested that if only every Sikh boy was given a crossbred cow and trained to nurture it for milk production, not only would the fat produced solve the acute problems of high edible oil import bill but also be able to control insurgency in Punjab.

But for the winds of change brought in by the Bofors kickback scandal in those times, he may well have succeeded in making the government implement the bovine strategy. Junkyard of the history of development efforts has many skeletons of grandiose plans whose origin is in succlure.  The problems of treating the world as an Excel sheet and scaling up as a process of dragging the cursor obviously are that one fails to note the input-output relationships, alternate uses of resources, including time, as well as secondary and ripple effects of the consequent social changes.

Faiccess was used by Mahajan to characterize a situation in which outputs of a program are achieved, but the mission is not. It has a more nuanced connotation to me. It lies in the failure to appreciate the time dimension and consequences over time of what one causes. On the one hand, it connotes an incomplete and possibly fallacious understanding of community needs, and on the other, it is a fallacy that favorable outputs must always lead to desirable outcomes and sought after long-term impacts.

The first is quite a common error. As a matter of fact, there are numerous occasions when the development intervener does not really make efforts to identify community needs. She relates the observations she makes about the community to his earlier life experiences and concludes what the total constellation of needs is like. And then she sets about addressing them.

In reality, the needs so identified might rank much lower in the hierarchy of intensity of felt needs of the community. As a result, the intervention may fail to take off. Greg Mortenson in his extraordinary memoir, Three Cups of Tea, narrates a classic example of this. His community in Korfe village in Gilgit Baltistan needed a bridge across the Braldu River far more intensely than they needed a school building. He had made heroic attempts to generate money and procure all the lumber and other materials for the school. So he had to store the material and work for the bridge!

The other interpretation of faiccess is about the achievement of objectives not leading to achievement of the mission. It is quite difficult to diagnose and seeps through insidiously. An infamous example relates to the zealous manner in which all open sources of water from which people filled for their domestic needs were closed in Rajasthan to control guinea worm. People were asked to take water from hand pumps. While this problem was controlled, the gradual fall in water tables saw a more than proportionate increase in total dissolved solids and worse, fluoride levels in the water leading to an intractable problem of widespread musculoskeletal fluorosis.

Slippage between outputs and outcomes

The output of the program of providing safe water to the population was achieved, the outcome of control on the guinea worm was achieved, yet the desired impacts eluded. At other times, there would be slippage between outputs and outcomes. For instance, while trying income enhancement through new crop promotion, outputs are regarding higher yield and good income from the newly promoted crop. These may come through. Outcomes are regarding net increment in family income, which may prove to be elusive due to collateral factors.

That both succlure and faiccess are common to development interveners and interventions will be quite acceptable to those who have spent years in the development sector. It is far less clear as to what would be a sure fire way of detecting possibilities of either of these happening mid-course or avoiding them altogether.