The country’s particularly vulnerable tribal groups, who live mostly in dwindling forests, have not been well served by the government’s administrative machinery, but have slowly been reduced to virtual serfdom 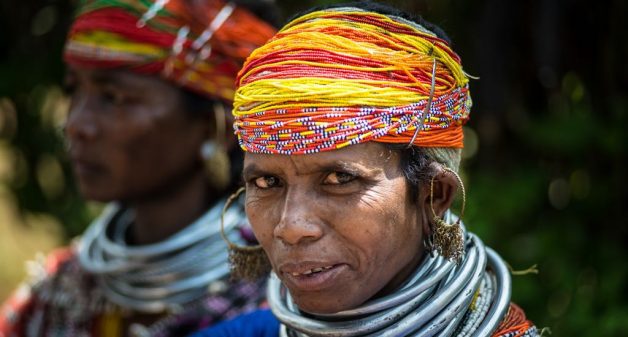 The Bondas of Malkangiri in Odisha, like other particularly vulnerable tribal groups, have been left out of India’s development story. (Photo by Saurabh Chatterjee)

Max Weber, the 19thcentury German sociologist, had extolled the virtues of bureaucracy. India used to celebrate its steel frame governing the country for decades, and which continues to rule us till date, though it is unfashionable to sing its virtues any more. Interventions and solutions, which are applicable to large numbers of people, can be well implemented through huge bureaucratic structures.

If the interventions are well designed and the implementing bureaucracy is diligent, then such solutions do provide excellent results. India’s enviable record in conducting mega-scale elections point to the efficacy of mechanically but efficiently implemented processes uniformly managed at an extraordinarily large scale.

But where the need is to engage with people with special needs, the bureaucracy appears to become an ineffective machine, and when such people with special needs are in a large number of locations scattered over a wide region and when in each of these locations they are swamped and surrounded by ordinary people who do not have those needs, the bureaucratic apparatus becomes singularly inappropriate.

There are at least three classes of rural people falling in the category. The first and perhaps the largest class is people with disabilities (PwD), including those who are now so remarkably called Divyangs, persons with development disorders and persons suffering from mental disorders.

The second class is of people who have for generations remained nomads and been living at the fringe of the main society. The third and perhaps the least visible are the persons belonging to particularly vulnerable tribal groups (PVTG).

One can fault the government with neither their intention nor the financial resources they allocate for the wellbeing of the people in these three classes. Yet the results are, to put it mildly, disappointing. In my view, the problem lies with reliance on a bureaucratic apparatus, which simply is not designed to deal with people with special needs. We will look at each of the three instances. Let us first look at people of the PVTG.

Serious attention was paid to the status of the PVTG at the behest of the National Advisory Council (NAC) of the chairperson of the erstwhile United Progressive Alliance government. The government framed policies in 2012-3 based on recommendations of the NAC. As many as 75 tribal groups with a total population of about 2.7 million were classified as PVTG. This small number of people is scattered over a large number of locations in over a dozen states of the country.

NAC defined PVTG as a group of people who practiced pre-agricultural livelihoods, who lived in forests, who eked out an existence through the subsistence mode and who exhibited stagnant if not falling populations.

Where they can, the people of the PVTG still live in forests and practice primitive forms of agriculture. However, in the main, the pressure of population growth of other communities has reduced area under dense forests and rendered the mode of living of the PVTG increasingly unviable.

The administrative structures at the cutting edge charged with the responsibilities of ensuring the wellbeing of the people of the PVTG differ from state to state. States like the undivided Andhra Pradesh had formed special agencies for their welfare. Madhya Pradesh has formed district level agencies for the welfare of the PVTG. In other places, the Tribal Development Commissioner or equivalent is charged with the responsibility of looking after them.

While funding and schemes under the tribal sub-plans of the central government are supposed to benefit the PVTG, in 2013, the government created a special window under conservation-cum-development (CCD) scheme to preserve the cultural identity and ensure development of the PVTG.

The CCD has an annual spend of about Rs 2 billion. Each state decides how the specific funds under the CCD would be spent, but in general, attention is focused more on creation of basic amenities in the habitations of the PVTG.

Virtually each of the tribal group in the PVTG class shows among the worst levels of development indicators. Literacy levels among them are very poor; malnutrition is rampant, life expectancy low and living standards poor.

There are obstacles in the way of including them in the general process of development. They are located in remote areas, often under the jurisdiction of the forest department. Electricity supply, road network and communication are poor in their habitations. The nation, its elite and the media perhaps pay more attention to the preservation of the wildlife and flora in their habitations than to the conditions of the PVTG.

Lacking the skills to survive in a competitive labor market, savvy to negotiate their way or the strength of numbers to exercise influence on political processes, the people of the PVTG have become exceedingly vulnerable.

In most areas where environmental conditions and population pressures have worked against them, they have been reduced to near serfdom, working as hapless labor in ill-paying and harsh working conditions of quarries or brick kilns. To borrow from a case study prepared by the late professor Ranjit Gupta: “These people live and that is all.”

An allegory comes to mind. Combine harvesters are powerful farm machines useful to large farmers growing field crops such as wheat or corn on large acreage of land. The machines are designed to handle huge quantities of crop. They work with mechanical precision, chopping crops, separating the grain from chaff, and cutting the chaff in small bits.

I have so far not heard of harvesters that can delicately pluck rosebuds off rose plants without damaging either the plant or the buds. Not even in a garden that has only rose plants, leave alone gardens of mixed flowers.

Folklore as well as lived-in experience regarding even a commercial crop like tea points to the need of delicate fingers and attentive workers to nurture and harvest the crop. Clearly, each type of plant needs its own kind of care and its own kind of implements. Time will tell whether governments are interested to and can employ appropriate administrative implements to further the interest of the people of the PVTG.