Forced to migrate due to poverty and recurrent droughts, and with no better life in faraway brick kilns, farmers in western Odisha have turned to watermelon cultivation, reaping rich benefits 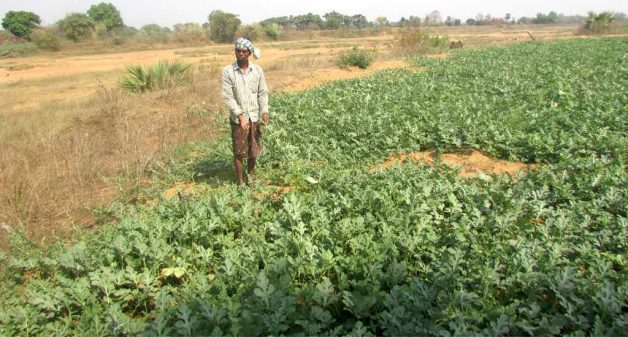 Cultivating watermelon has stemmed migration from the drought-prone western districts of Odisha. (Photo by Rakhi Ghosh)

A few years ago, Sadhu Thakur and Bharat Thakur of Raikhal village in Belpara administrative block of Balangir district decided not to migrate to Ranga Reddy district in then undivided Andhra Pradesh, to work in a brick kiln there. They did not know that their decision to remain in Raikhal to grow watermelons would change their lives.

The two former migrant laborers’ decision has not only earned them good income, but has stemmed inter-state migration of more than 200 families in Belpara block. Following the footsteps of Sadhu and Bharat, many farmers started cultivating watermelons in the lean season between July and November.

With a huge demand for Odisha’s watermelons in Raipur, Mumbai, Kolkata and Chennai, besides Bhubaneswar, the farmers who used to migrate to southern states have been reaping dividends by growing watermelon in the lean season for the past eight years.

In 2007, Adhikar, a non-governmental organization (NGO), conducted a survey and found that people from the drought-prone areas of Odisha migrated to southern states to work in brick kilns. Villagers from the western districts of Balangir, Nuapada, Kalahandi and Bargarh were migrating due to poverty, recurrent drought and lack of alternate livelihood opportunities.

According to data available with Aide et Action and other non-profits working in these districts, every year nearly three lakh people migrate to neighboring states. Most of the migrants are landless Dalits. They migrate after Nuakhai, the local harvest festival, and return with the arrival of the monsoon. They stay away from their villages for a period of six to eight months.

Seasonal migration from the western districts started in the 1960s, when single men migrated to Raipur to work as rickshaw pullers. Later they started migrating to southern states where there was a huge demand for cheap labor to work in brick kilns.

September, the month when Nuakhai is celebrated, is the time when agents contact villagers. They advance villagers around Rs 25,000 per unit consisting of a man, woman and one or two children. As the villagers of this region are good in brickmaking, every year the demand from southern states keeps increasing.

But the migrant workers face both physical and mental harassment in brick kiln sites. Kiln owners force them to work for long hours, giving low wages. The workers therefore had no money for weekly expenses, especially food. 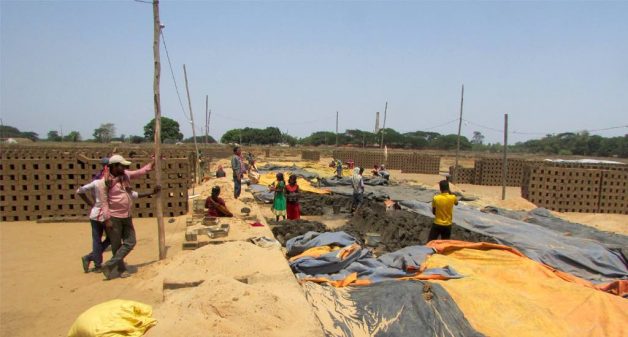 Migrating to work in brick kilns is a thing of the past as watermelon cultivation earns good income. (Photo by Rakhi Ghosh)

“We used to eat broken rice with onion or locally made pickle,” Dulamani Kharsel told VillageSquare.in.“You can imagine what kind of nutrition our children got.” If they fell ill, there was hardly any money to get medicines.

With not much of a difference in their financial status even at destination sites, the workers decided to stay back in their villages and continue farming.

Sadhu decided to grow watermelon in two acres of land after harvesting the paddy crop. Within a week all the villagers joined hands, agreeing to put their fallow lands to use. “They bought 250 gm watermelon seeds and sowed in about 60 acres of land,” Duleswar Budek, coordinator at Adhikar told VillageSquare.in.

The rivulet Lanth flowing nearby dries up in summer. As irrigation was a challenge, Adhikar provided the villagers with a kerosene water pump. They bought another pump by pooling in their money. The farmers use them to pump water from the rivulet to their watermelon fields that now spread across more than 500 acres of land.

“They worked hard from July to November, the period they usually migrated,” said Budek. Their hard work brought them good results. With good profit in the first season, farmers from neighboring villages such as Kalkikathar, Dumagota, and Katarlaga joined them.

“Due to drought and water scarcity we never thought of growing any other crop,” Sadhu Thakur told VillageSquare.in.In the very first year, he earned more than Rs 50,000, after working hard for three months. With hope, he decided to grow the fruit in some more land. Now he earns more than Rs 1 lakh from watermelon cultivation.

The same year, Lambodar Kharsel and a few other farmers of Deogaon village made a good profit growing watermelons. Some farmers worked under Mahatma Gandhi National Rural Employment Guarantee Act (MGNREGA) schemes to earn money, so as to buy watermelon seeds.

Other than an amount of Rs 4,000 the farmers spend on buying 250 gm of seed — the price having increased tenfold in the last few years — there is no other investment. “Regular watering and a little care are enough and so the profit margin is high,” Lambodar told VillageSquare.in.Women also work along with their men.

Farmers in this region grow the watermelons organically, without the use of any chemical fertilizers or pesticides. Hence the fruits are in high demand.

Initially the farmers sold the watermelons locally, in Patnagarh, Kantabanji and Balagir town markets. Now traders from other cities and states come to the farms to buy the fruits. Every day traders take about 60 truckloads of watermelon. 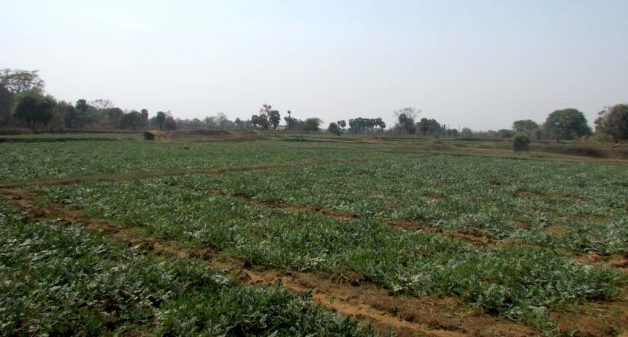 Growing watermelons has not only curbed migration but has brought about many positive changes to villages of western Odisha. (Photo by Rakhi Ghosh)

“If the state government can provide seeds on subsidized rates, we can save some money,” Kautuk Bag told VillageSquare.in.The farmers also feel the need for a cooperative group so that they can fix the price.

Presently the traders fix the price and sell the fruits outside the state for a higher margin. “Now we sell the fruits at Rs 2 per kg, but if there’s a cooperative, we can get the right price for our produce,” said Bag.

Lambodar’s two children accompanied him and his wife when they went to Andhra Pradesh to work in a brick kiln. Now he feels happy that they are enrolled in a nearby school and getting mid-day meal and immunization that they used to miss out during migration.

Some farmers have replaced their thatched huts with brick-and-mortar houses. Some have opened bank fixed deposits for their children. They also work under MGNREGA schemes and earn an additional income.

“Since we were not in the village, earlier we were left out from various government entitlements,” Dulamani Kharsel told VillageSquare.in.Now they get what is due to them. The villagers now attend village council meetings and actively take part in discussions.

The major change is that, for any festival or special occasion, they no longer borrow money from moneylenders, as they are now able to save money from their earnings. “Watermelon cultivation has made us economically sound and helped us live with dignity,” Bharat Thakur told VillageSquare.in.