Women in Odisha’s coastal fishing villages have turned to selling fish and value-added fishery products after eliminating middlemen and abolishing the home brewing of country liquor, the root cause of their problems 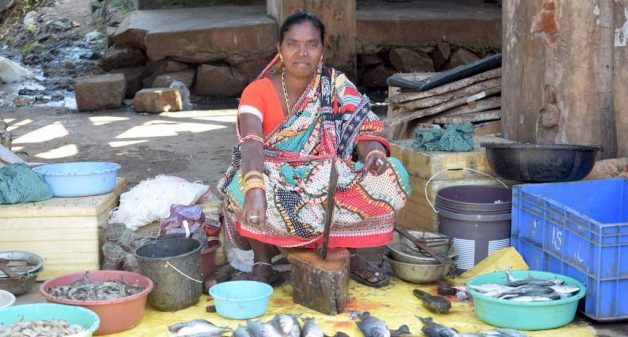 Women like Dulana came together to empower themselves as businesswomen, taking their families and community forward in the process (Photo by Basudev Mahapatra)

Selling fish at the local fish market, Dulana Das (40) of Rambha village in Odisha’s Ganjam district took pride in introducing herself as a businesswoman instead of a fisherwoman. “I buy fish every morning from fishermen who fish in Chilika Lake and the nearby sea,” Dulana told VillageSquare.in.“With a designated place for me in the market, and a 20% profit, I earn a good income.”

“Women like Dulana have not only contributed to economic progress of their families, but to improvement of their social status too,” said A. Kaleya, a young man engaged in community development work. An ignored lot, the women rooted out problems one after the other, and emerged as successful entrepreneurs. “We are now treated like human beings,” said 75-year-old B. Chittamma (75) of Kotturu village.

Decades ago, families and the community ignored their women. “Boozing being common among male members of almost all fishing villages, women didn’t get any respect, but always bore the brunt of alcoholism,” Chittamma told VillageSquare.in.

Despite standard catch, the income was low because middlemen siphoned off the profit. They never paid the fishermen on time. The fisher families had to struggle for survival under economic pressure. Whether it was lack of money or the men’s frustration caused by paucity, women were the victims.

As a first step, nine groups of fisherwomen, with 20 members in each group, were formed under Kalyani Nari Shakti Sangha in Kotturu. The number of groups soon increased to 14, when women formed five groups in an adjacent village named Arjipalli. The women first fought against brewing of country liquor and succeeded. 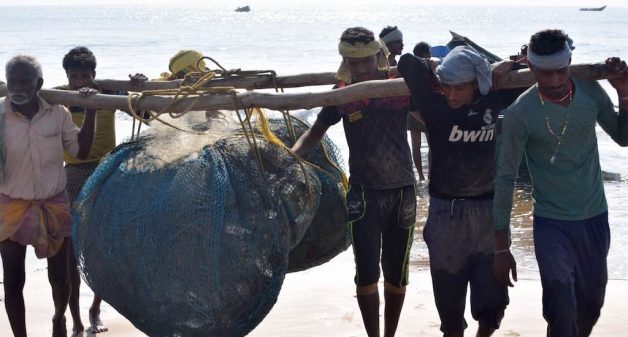 Their success in abolishing country liquor production in the villages encouraged the fisherwomen to address their financial problems next. They pooled in money and ventured into fish business in local markets.

The women paid cash immediately for the fish they purchased. They demanded outside vendors and middlemen to pay likewise while lifting the catch. “Though the vendors resisted initially, since they had to supply fish to the markets as per commitment and since our men supported us, they paid up,” said Chittamma.

“This was the game-changer,” said Mangaraj Panda. “With this positive development, women in other villages across coastal Odisha formed groups and they too fought to end exploitation by middlemen.”

There were still some issues. Every group did not have equal access to the market to sell their stock. Prices of fish differed from place to place. In order to bring all the fisherwomen under one umbrella and develop common market linkages, they formed a federation named Samudram.

In order to empower the fisherwomen as entrepreneurs, Samudram organized training sessions for them on hygienic methods of producing dry fish and other fishery-based products. “It opened up new earning opportunities for us and fetched better profit than the raw fish,” K. Eramma of Nolia Nuagaon village told VillageSquare.in.

Samudram has set up fish procurement and processing centers equipped with refrigeration and drying racks for fresh fish, besides weighing and packaging machines at different places. Women own and manage the facilities.

“Even though income was important, catching and selling fish was not all, because the catch was falling day by day,” said Chittamma. “Instead of overexploiting this marine resource, we had to ensure long-term availability.”

“We didn’t know this resource is limited and the catch may fall further, and make us go out of business,” P. Kaumudi (50) of Nolia Nuagaon told VillageSquare.in.“As experts explained the reasons for dwindling catch and actions needed, we changed our fishing practices.” The fishermen started using nets to spare the seeds and fingerlings. They declare no-fishing days periodically.

“Women also took up poultry and goat-rearing as alternate livelihoods during no-fishing months,” Kaleya told VillageSquare.in.This helped them make a living during the fishing ban from November to May, in the coastal seas of Ganjam, Puri and Kendrapara districts for the protection of Olive Ridley sea turtles during their annual nesting phenomenon called arribada.

According to fishermen, government and regulating authorities turn a blind eye to trawlers that violate norms and pose bigger threat to the ocean, its ecosystem and fish population. “Living on the coast and depending on the sea for livelihood, we have to protect the marine ecosystem and the visiting turtles to keep our sea healthy and dependable,” fisherman Kaumudi told VillageSquare.in.

Samudram now faces the toughest hurdle since the implementation of Goods and Services Tax (GST). “As GST mandates 12% tax on packaged dry fish items, prices have increased, and so many of the wholesale buyers have stopped buying,” said Panda. 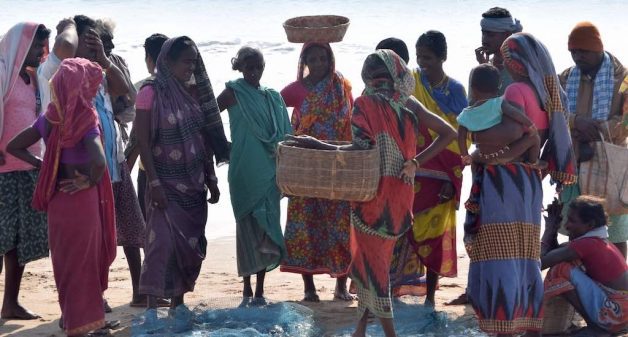 This has led to a halt in businesses by the groups and the federation. “The fisherwomen work individually now,” said Kaleya. The members contend that they are not educated enough to keep accounts and file GST. Some advised the women to hire a professional.

“It’s not feasible since we are not a corporate business, but make a living out of it,” said Chittamma. “Our progress will stop if community development and livelihood activities do not get tax exemption.”

Notwithstanding the let up in business due to GST, Samudram has not only helped the women earn, but has also empowered them to identify their potential and dream a better future for their children.

The women claimed stopping brewing of country liquor and stopping child marriage as their biggest achievements. They have helped construction of schools in villages to educate their children. “Girls go to college now, whereas they were not allowed to complete primary education earlier,” said Chittamma.

Undergraduate students like S. Puja and A. Kamla of Nolia Nuagaon are proud to be the first girls from their village to have joined college. “Our aim is to pursue higher studies and find jobs,” they said.

The groups have become sources of support to members in time of emergencies. “Samudram and the SHGs helped us overcome the damages caused by two major cyclones, namely, the Phailin in 2013 and the Hudhud in 2014,” B. Mahalaxmi (40) of Huma village told VillageSquare.in.

Basudev Mahapatra is a journalist based in Bhubaneshwar.