In an extraordinary tale of community managed ecological restoration, the residents of Poi village near Kalyan in Maharashtra adopted a degraded forest and turned it into a lush haven of biodiversity 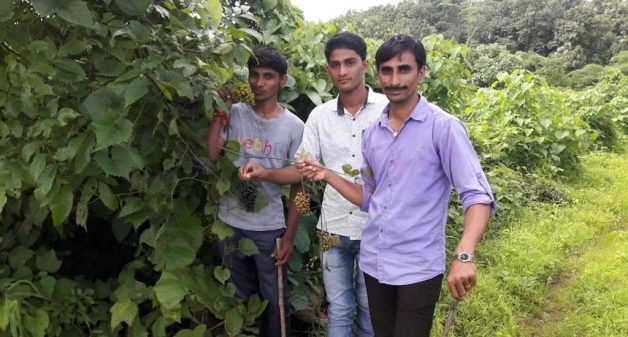 Youth from Poi village in the forest they conserved along with other villagers. (Photo by Hiren Kumar Bose)

With footfalls of over 300,000 every day, Kalyan is a busy railway station on the Central Railway corridor some 54km from Mumbai. However, if you ask for directions at the station to nearby Poi village, in all likelihood you would get a blank stare, as if you were asking the way to Mars.

Even those residing in Kalyan for decades do not know anything about Kalyan’s green lung and its best-kept secret that has existed near the bustling town with a population of over 1.5 million.

About 20km from the hustle and bustle of Kalyan city is a village that adopted a deciduous forest nearly two decades ago, increasing its tree cover and turning it into a lush green haven. Thanks to the efforts of 180-plus households in Poi, the forest on its northeast, between Kalyan and Murbad administrative blocks, has become a shining example of conservation.

What makes the villagers’ story exemplary is that while Mumbai struggles to save the Sanjay Gandhi National Park, a forest within the city, from politically influential land grabbers and depredation due to government projects, Poi with its 800-plus inhabitants has conserved a 635-hectare forest in its neighborhood without receiving any pecuniary benefits.

Predominantly a village of farmers, mainly populated by the kunbis(derived from kun and bi meaning people and seeds, or those who germinate more from a seed), Poi situated at the distant end of the Kalyan taluka in Maharashtra’s Thane District and is accessible by the loop road on National Highway 222 from Raita and Kolam villages.

The people of Poi adopted the forest located in the foothills of Sahyadri Mountain Ranges that is one of the eight biodiversity hotspots in the world in 2000, under Joint Forest Management, based on the National Forest Policy of 1988.

In 1992, the state decided to bring forest officials and villagers together to work towards conservation of environment. Initiated by Harishchandra Daji Sambre, a forest guard who has since retired from work, forest officials of Kalyan-Murbad range held a series of interactions with villagers in 1998.

The villagers learnt about the forest, besides being a habitat for mammals, birds and insects, soaked up carbon dioxide from the atmosphere, storing it in their trunks, roots, leaves, and forest soils, how it helped regulate local climate, and prevented soil erosion, thus increasing the soil fertility and helped groundwater recharge.

Following the meetings, when the villagers adopted the forest and formed the Poi Forest Management and Forest Protection Co-op Society Ltd, it was greatly degraded as residents from neighboring villages regularly cut trees to for firewood.

Now, as most villagers in this taluk have received domestic cooking gas connections, the pressure on the forest has decreased drastically, leading to drop in forest-related offences. Offenders, if any, were let off with a reprimand. 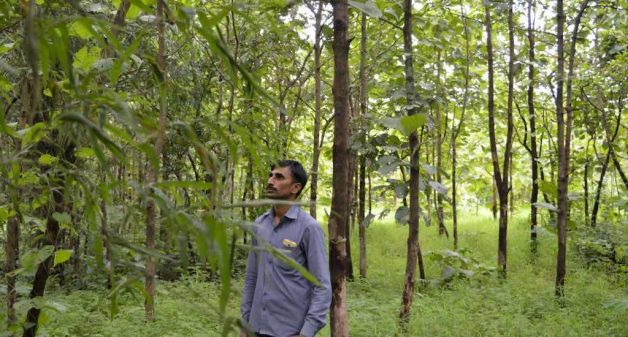 Under the joint forest management system, the forest department and Poi villagers have restored the degraded forest. (Photo by Hiren Kumar Bose)

“Since 2000, we have been taking care of the forest and witnessed a change in local temperature,” Gurunath Sambre, a teacher who quit his job to become an organic farmer, told VillageSquare.in.“In fact, from mid-October till the month of February, mornings are quite cold and one needs to wear woolens to venture out into the fields.”

Ever since then the villagers became the sentinels of the forest, they have barred the felling of trees, stopped cattle grazing, checked encroachments and prevented forest fires, resulting in increased tree cover and the return of wildlife that include wild boar, deer, jackals, hyena, peacock and many varieties of butterflies. “At times, deer have been sighted too,” informs villager Narayan Guthere, who farms on his eight-acre plot.

Poi stands tall among the 74 villages and 26 tribal habitations in Kalyan taluka for its no-tolerance policy towards alcohol, having banned its sale in its vicinity in the early 80s, motivating the villagers sharing water from the same community well despite the presence of tribal and Dalit families among its residents and laying a 2km long pipeline from Barvi River to bring water to the village, resulting in the villagers taking a second crop following the rice harvest. The beneficiary of scores of rural schemes doled out, both by central and state governments, the village have successfully reversed migration of the locals to the neighboring cities and satellite towns.

While surrounding villages like Dahagaon, Rohan, Chavare, Antade Mhasrondi, Apati and Manjarali struggle for drinking water during April and May, Poi is never short of water with its wells holding sufficient water even during the hot summer months.

Maharashtra has 12,000-odd Joint Forest Management Committees and is divided into categories A to D according to their status. Poi is in the ‘A’ category and has been the recipient of Sant Tukaram Van Gram Puraskar awarded by the State Government.

According to a Maharashtra Forest Department report, ever since the villagers adopted the forest, “the tree cover from a base of zero density has been able to recoup to 0.8 in the practically whole of the area with maximum possible 1.0 density in about 60% of the forest areas of the village.”

In a state that has failed miserably in protecting its forests, with a dip in forest cover of 22 sq. km in the last eight years, the efforts of Poi villagers is noteworthy and commendable. According to Comptroller and Auditor General (CAG) report of 2016, Maharashtra, which introduced its Forest Policy in 2008 aiming to bring 33% of the state under forest cover and having spent Rs 68.81 billion on the project, it has not witnessed any increase in its forest cover. 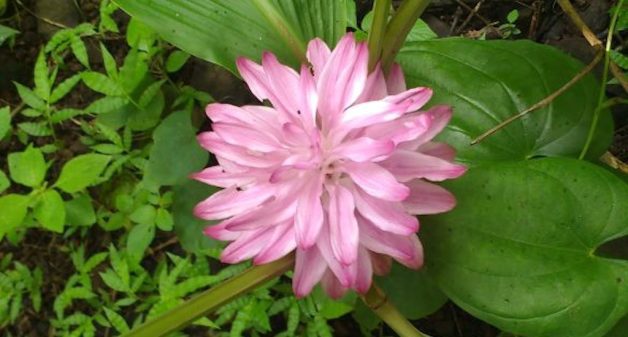 In a scenario where the state government is toying with the idea of tree credit on the lines of carbon credit to encourage afforestation, Poi villagers to have yet to benefit from any scheme of the Forest Department though they were assured of 50% on the sale proceeds of timber when it happens. If the villagers had their way, they would like the status quo to be maintained —  what they call kurhadla bandi(ban on the axing of trees).

“We would like to introduce eco-tourism in the forest so that others can appreciate our efforts besides the villagers benefitting from it monetarily,” Ravindra Narayan Ghodvinde, the village’s first graduate and presently the chairman of Kalyan Agriculture Produce Marketing Committee, told VillageSquare.in.

Though the Forest Department is open to the idea of introducing eco-tourism activities, Jitendra Ramgaonkar, deputy conservator of forest, is skeptical of its success because villagers in Poi, when not farming, engage themselves in odd jobs in the neighboring cities like Ambernath, Badlapur or Thane.

“Unless we provide them with better emoluments than what they are making today the eco-tourism project is unlikely to be a success,” he told VillageSquare.in, mentioning how an eco-tourism activity in Navatola, a village in Salekhasa tehsil in Gondia district affected by left-wing extremism, became a success when the state government built a zip line across Hazara waterfall, providing employment opportunities to local boys and girls of the village, yielding a revenue of Rs 2.5 million year collected as fees from tourists.