Although there are 27 million people in India with disabilities, of which more than 70% live in villages, they are a neglected segment of the population despite pious intentions mouthed by the central and state governments 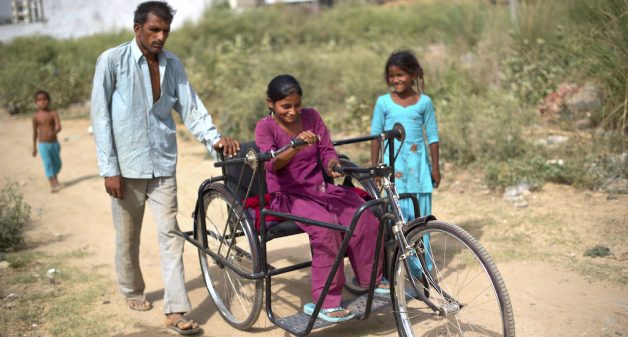 Persons with disabilities usually get short shrift across rural India. (Photo by Flickr)

A few weeks ago, I wrote about the difficulty faced by the state in looking after the welfare of the people belonging to the particularly vulnerable tribal groups (PVTG), who also happen mostly to be forest dwellers. The PVTG category comprises people who are small in number — some quarter percent of the population — who are scattered in a wide area, are swamped by people who are better endowed and better connected, and have no innate skills to negotiate with the government or the markets. See: India’s bureaucracy has failed its forest dwellers

In this article, I look at a similar category among the scattered and disenfranchised groups (S&DG), namely the category of the persons with disability (PwD). Based on the 2011 Census, a recent statistical profile of the PwD done by government of India puts the total number of PwD at 26.8 million or about 2.2% of the country’s population.

The number of PwD covers diverse forms of disabilities as defined by the Census Commissioner and includes blindness, deafness, neuro-motor disabilities, mental disorders, leprosy induced disabilities, etc. Interesting, as much as 71% of the PwD live in rural areas.

Incidentally, the sex ratio among the PwD is 787. This awful number shows that the disabled girl child has much poorer chance of survival in this country than her disabled brother. Since this sex ratio of 787 among the PwD is much worse than population sex ratio in the worst districts, I am not sure that the human hand has not compounded nature’s cruelty in making the ratio so skewed. The neglect of women with disability is also reflected in the poor literacy ratio among them.

Although the total population of the PwD is quite large, they appear to be invisible. One sees them somewhat more frequently at railway stations and at traffic signals as beggars. One may also see them in special shows organized by or for them or if one visits special institutions meant for them. However, in the course of normal social interaction one rarely sees them.

PwD have even less visibility in rural areas. The fact that the country as a whole has not created a disabled friendly infrastructure in public places is a major reason for this forced invisibility. The PwD are not seen in public simply because a large number of public places are not accessible to them.

Socially speaking, among the chief reasons for their poor visibility are insensitivity of general population towards them and a sense of stigma seen by their families. Such stigma, the families feel, will make it difficult for their other “normal” daughters and sons to find a suitable matrimonial match. This sense of stigma is perhaps much stronger for certain classes of disabilities such as neuro-motor disabilities, palsy, mental disorders and leprosy induced disabilities. The burden of this stigma and insensitivity lies particularly heavy on PwD in rural areas.

PwD have become subjects of legal enactment in India several times. Three recent legislations include the Persons with Disability Act 1995, and more recently, the Rights of Persons with Disability Act 2016, and the Mental Health Act 2016. The 1995 Act required state governments to provide for the welfare of the PwD. This obligation included making public infrastructure disabled friendly, providing for inclusive education, creating facilities and providing financial assistance for the provision of diverse aids to the disabled and for creating positive discrimination in favor of the PwD in State employment and education.

The 2016 Act was required to align national laws related to the PwD with the UN Convention on Rights of the Persons with Disability (UNCRPD). Thus the government has created the legal framework for the welfare of the PwD. The law was considered as a culmination of recognition of the PwD as legitimate claimants of entitlements as indicated in the UNCRPD by the government.

However, the budgetary provision to give a concrete substance to these intentions was kept at a bare Rs 300 crore. This somewhat of an anti-climax was explained by the logic that most welfare schemes are the responsibility of states and by increasing the share of states in resource allocation as per the recommendation of the Finance Commission the central government had really passed on the baton to the states.

The Centre continued its thrust on inclusive infrastructure, whereby it emphasized the creation of disabled friendly access to public places. It also launched the Unique Disability Identity Number (UDID) program to introduce speed, transparency and elimination of corruption in welfare schemes meant for the PwD. In about a year and half of launch of the UDID scheme, by the end of May 2018, about 750,000 PwD of the total of 27 million had registered under the UDID scheme and were allotted so-called swabhiman cards. The state sure moves slowly!

What then is the situation at the state level? Diverse schemes are run for the welfare of the PwD. These include for instance provision of mobility assistance such as a tricycle to the disabled, provision of hearing aids to the hearing impaired, financial support to organizations undertaking rehabilitation and inclusive education of the disabled, etc.

These schemes are managed, for example, in Maharashtra through the office of the Commissioner Disabilities. Presumably similar arrangements exist in other states. The budgetary allocations for the PwD are grouped in Maharashtra under the budget for the ministry of social justice. This ministry is charged with the responsibility of, among other things, people belonging to scheduled castes, nomadic tribes, PwD etc.

I was unable to lay my hands on the budget provided specifically and explicitly for the PwD, but my inference is that of the total allocation for the social justice department, more than the lion’s share goes for the welfare of the persons belonging to scheduled castes and new Buddhists in Maharashtra. Incidentally, compared with the rest of the country, which has 2.3% of the population in the PwD category, the PwD account for 2.63% of the population in Maharashtra. To me, it’s clear that the resources spent on the welfare of the PwD are not at all commensurate with their numbers.

It is time to ask why is it that state tends to be so loud in words but seemingly so indifferent in action. My sense is that scattered as they are, in no constituency do the PwD form large enough numbers to make a difference to any politician’s electoral chance.

Sociologists suggest that for a group to become mobilized and consolidated as a collective interest group, politicized identity is very important. Such an identity is lacking for the PwD. And so, they are not mobilized by anyone. As a result, no one takes an interest in these people.

If the political masters do not take an interest, then the bureaucracy is bound to take a cue from them and strives to work on other things that interest them. So, no one really takes interest in the well being of 27 million people because they are scattered. And they suffer silently in neglect.