The Bahurupis of West Bengal, who donned greasepaint and entertained the rural masses through folk and street theater by masquerading as mythological characters, have dwindled in numbers due to lack of patronage 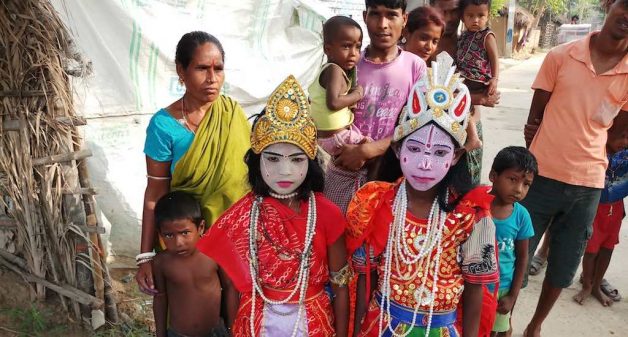 Jagannath and Jyoti are among the child Bahurupi breadwinners who miss school to perform in villages. (Photo by Gurvinder Singh)

As the chirping of birds breaks the stillness of morning hours, dark clouds hover over the sky. A gentle breeze kisses the rice fields, painting the village scenic. Jagannath, however, has no time to relish the beauty of nature. The 11-year-old has finished his morning ablutions and is being dressed by his mother inside their dingy thatched shanty made of mud and bamboo.

His mother applies cosmetics on his face and makes him wear glittering clothes, and garlands made of cheap pearls and a crown, to make him look like Lord Krishna, the Hindu god. Just outside his house, 10-year-old Jyoti’s father helps her get ready in a similar way. She would be dressed up as Radha, the love of Krishna.

The children are not going to participate in a fancy dress competition at school. The duo is the breadwinners of their families belonging to the clan of Bahurupi folk artistes of West Bengal. There are fewer visits to schools than the number of performances.

The families stay at Bishaypur village in Labpur administrative block of Birbhum district, around 200km from Kolkata. The village is just 30km away from the prestigious Visva-Bharati University founded by Rabindranath Tagore. The Bahurupis in Bishaypur still cling to the traditional art to earn their livelihood.

Roughly translated, bahurupi means a street performer who assumes disguises. They wear the costumes of Hindu gods and goddess or other characters from mythological stories and perform folk shows, in return for contributions from the audiences. They walk several kilometers every day under the blazing sun to perform, and eat whatever villagers offer.

The Bahurupis belong to Bedia community, a Scheduled Tribe that comprises around 1.25% of the Scheduled Tribe population in Birbhum district, according to Census 2011. Bishaypur village currently has around 30 families with around 70 artistes including children. 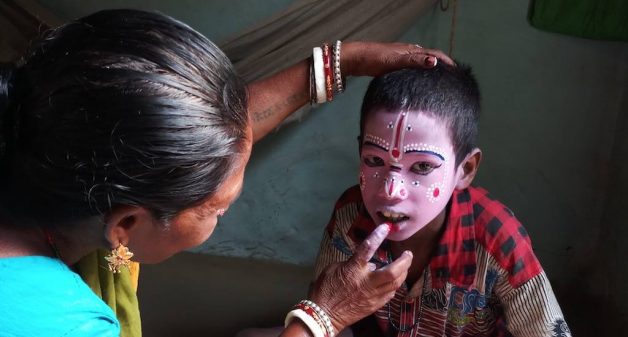 Poverty forces Bahurupis to make their children don the greasepaint to perform. (Photo by Gurvinder Singh)

According to Aditya Mukhopadhyay, a folk art researcher who has authored a book on Bahurupis titled Banglar Bahurupi (Bengal’s Bahurupis), estimates that around 70 Bahurupis are still active in Bengal, with most of them living in Bishaypur and the rest in Tarakeswar in Hooghly district and some other areas.

Sanatan Byadh Chowdhary, a 55-year-old veteran Bahurupi artiste, who now runs a small shop in the village, shared their history that he had heard from his ancestors. Expert hunters in Gujarat, the rulers of Bengal recruited them in their armies for their expertise with bows and arrows.

“However, after the end of battles, they forgot the shooters and our ancestors were forced to fend for themselves,” Sanatan told VillageSquare.in. “They got scattered in different parts of the state in search of livelihood and some took up Bahurupi to run the kitchen fire.”

Sitaram Byadh Chowdhary (34), a Bahurupi artiste for the past two decades, said that the work entailed hard labor. The artistes perform at incredibly high energy and pitches. They walk for nearly 15km every day and travel to distant villages for the shows.

Their performances in villages and even in the state capital to entertain people are based on mythological stories, told in words and rhymes. “We dress up according to the character we play,” Sitaram, who has donned the roles of Lord Shiva, Lord Ganesh and Ravana, told VillageSquare.in.

Sitaram said that women accompanied them to the performances, but would not let his three minor daughters do the same. “Illiteracy and poverty forced me into the work but I would not allow my daughters to follow my footsteps,” he said. “I manage to earn a paltry Rs 100 – Rs 200 a day and some kilos of rice and wheat after slogging for 8-10 hours under the scorching heat.”

Despite his meager income, he educates his children so that they would have a better future. Some of the Bahurupis confirmed in confidence that child marriages are common among them due to poverty.

Bahurupis unanimously rue that changing tastes of people coupled with the advent of television and social media have virtually sounded death knells, forcing them to look for alternate means of livelihood.

Chabi Chowdhury, a 45-year-old woman artiste also pointed out that losing respect among the people as one of the reasons for dwindling Bahurupis. “There were days when people touched our feet and took blessings though they knew we were just dressed as gods and goddesses,” she told VillageSquare.in. “But things have changed now and it’s painful that some have even begun to look down upon us as beggars.” 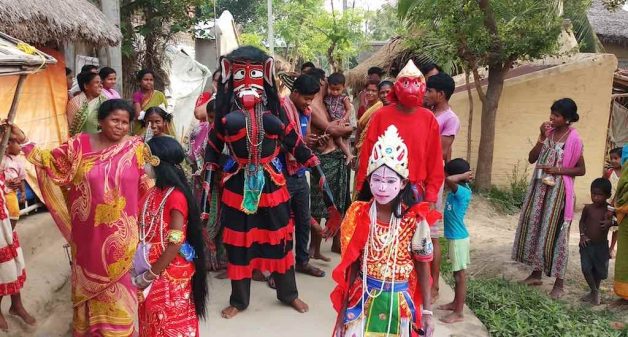 The performances of Bahurupis are based on mythological stories. (Photo by Gurvinder Singh)

According to Mukhopadhyay, poverty and illiteracy have reduced the Bahurupis to begging. “Their children do not go to school, but go for work which includes begging in trains and cities,” he told VillageSquare.in. “While the real Bahurupis lead a pathetic life, there are fake ones who don’t even belong to the community doing stage shows and making money.” Having lived as Bahurupis for many years, they find it difficult to find any other work, as most of them do not own land.

“We could have earned Rs 5,000, but programs are irregular and it is difficult to get even one or two plays a month,” Bachan Byadh Chowdhary told VillageSquare.in. Most of the Bahurupis do not have the retainership card and so they cannot get the minimal amount of Rs 1,000. “It requires a lot of formalities and continued pleas to the officials to get the card,” said Bachan.

“The Bahurupis are part of our rich heritage that we are proud of,” Ashish Ghosh (45) who teaches at Visva-Bharati University told VillageSquare.in. “We have seen performing them in our villages during our childhood days, but now we hardly see them.” He suggested that the authorities concerned should make proper efforts to change the Bahurupis’ situation, and revive the dying art of Bengal before it is lost.

As dark clouds bring heavy rains, Jagannath and Jyoti wait for the showers to stop, before resuming their long journey to perform, so as to fill the hungry mouths in their families.