The absence of most men and the nature of work in the farm and forest have left women in Mandal village of Uttarakhand with no option to spend most of their time with bent over double, which severely damages their health 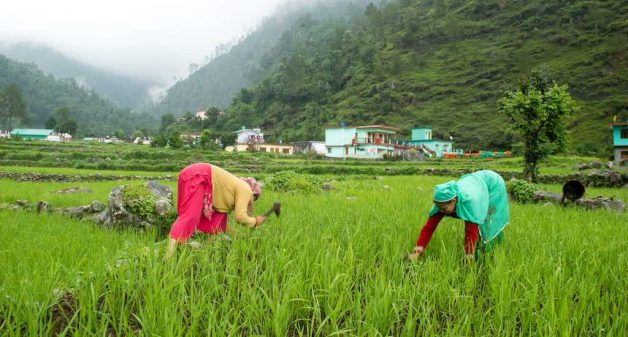 Durga Devi deftly digs up a fistful of rice saplings and transplants them on to an empty space in the pliable soil. As her hands work without a pause, so does her tongue. She chatters non-stop with Chandrakala Devi, her sister-in-law, who is transplanting rice in another corner of their field. They talk about their children, the food they have cooked, the weather, and other household matters.

“Old age caught up with us while we were working,” Chandrakala laughingly tells VillageSquare.in, as she progresses through the field. At 34, Chandrakala considers herself an old woman.

Durga and Chandrakala spend the entire time in the field bent over double, progressing a step at a time through their little plot of land in Mandal village of Chamoli district in Uttarakhand. Their work is strenuous, leaves them with aches and pains, but they must continue. They are surrounded by mountains, and a stream gurgles down the slopes near the fields. The Himalayan village is home to 108 families, and has a population of 452.

A 1991 report by the Food and Agriculture Organization, titled Most Farmers in India are Women, compared the annual work done by women, men and bullocks on a one-hectare farm in the Indian Himalayas. Women work for 3,485 hours, thrice as much as men, who put in 1,212 hours, and bullocks who are worked for 1,064 hours.

Durga and Chandrakala’s day starts at 4 am and ends at 10 pm. They start their day with livestock activities like fodder collection. They walk into the neighboring forest to collect fodder, spending four hours first thing in the morning on the labor-intensive task. This is followed by milking the cattle. 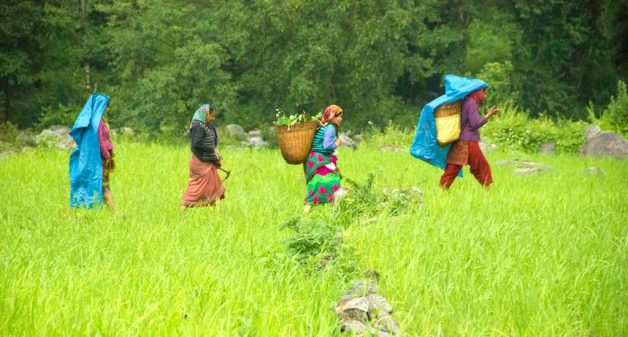 Women of Mandal village returning home after collecting fodder in the nearby forest. (Photo by Shatakshi Gawade)

Sometimes, they go a second time to collect fodder in the evening. They work in the field from 4 pm to 7 pm every day. The women grow wheat, mandua, jhingora, potato, and some vegetables on their land, apart from rice. Household work is a mainstay, as are agricultural activities.

Chandrakala’s family owns a small eatery in Mandal, which is on the Hindu pilgrimage route to Badrinath and Tungnath temples. After finishing work in the field, she works in the restaurant with her husband. But Durga says her husband doesn’t do anything.

A 2013 paper, entitled Health and Nutritional Issues of Hill Farm Women: A Socio Economic Paradigm, by the Vivekananda Institute of Hill Agriculture, Indian Council of Agricultural Research (ICAR) at Almora in Uttarakhand found that women in the hills work 14 to 16 hours daily.

Women in Uttarakhand have always been an active part of the workforce due to their active participation in agriculture, forest protection, cattle care and dairying. This workload is increasing because of the high male rural-to-urban migration for education and jobs. A study by the National Institute of Rural Development found that men constitute 86% of the migrants.

Bending over for work is an integral part of the women’s lives. Agricultural work requires them to stay bent. When they go into the forest to collect fodder for cattle, they return with loads that push them down to almost 90 degrees. Sometimes, these women carry a basket, which hangs from their head and down their back.

The sight might be quaint, but the strain it puts on the women’s back and neck is not. Chandrakala has taken and applied innumerable medicines, but the pain doesn’t go away. Her joints ache too.

The researchers of the paper Health and Nutritional Issues of Hill Farm Women: A Socio Economic Paradigm found that cutting fodder caused very strong exertion followed by harvesting (strong exertion) and weeding (somewhat exertion). The study was conducted in the neighboring Almora district, which has similar topography and climate. The researchers also recorded the muscular stress experienced by the women.

The women experienced moderate to severe pain throughout their bodies during weeding. They particularly have maximum pain in the ankle region due to the unnatural position they have to adopt. During cutting fodder, the women perceive moderate pain in the shoulder, upper back, lower back and knee region and mild pain in neck and ankle region. Meanwhile, harvesting lead to severe pain in shoulders and lower back.

The average farm size is about 0.04 acres. The land, like Chandrakala and Durga’s, is scattered in small pieces across uneven terrain, making mechanization unlikely.

Working in the rain

The thin dupatta isn’t doing a good job at keeping Durga and Chandrakala dry in the incessant drizzle. More rain-bearing clouds are rolling into the valley, but they can’t stop till they finish their quota of work for the day.

In the adjacent field, Rukmini Devi is working by herself. She is one of the few who has a plastic sheet to cover her head. But the cover isn’t a magic shield, and her face is wet. Sometimes she squats and sometimes she bends, as she roves through the field transplanting her rice. She has a cough and cold. “I’ve had this for a long time,” she told VillageSquare.in. 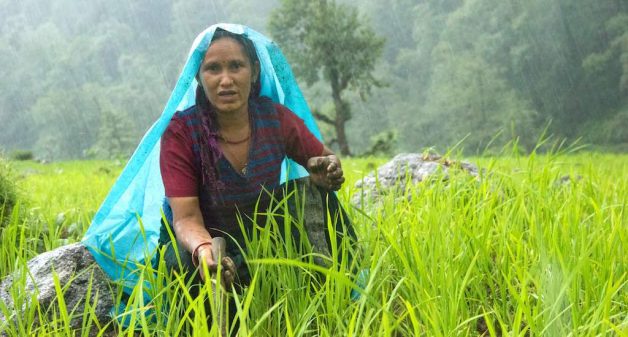 “They don’t rest even when they are unwell,” a government doctor from Chamoli, who wanted to remain anonymous, told VillageSquare.in. She has seen these women with constant cold and cough. She has also come across multiple cases of fungal infection on the skin, which is caused mainly because the women are frequently in contact with moisture and do not wash to maintain hygiene. She has observed the presence of leucorrhea, which is an indication of poor hygiene and STDs.

Most of the medicines to cure these common illnesses are available in the State Allopathic Dispensary in the village, says an ASHA (Accredited Social Health Activist) coordinator, who also did not want to be named. The ASHA too has a supply of common medicines like paracetamol and birth control pills. Common colds, fever and allergies are treated in the dispensary in the village. The women, and other villagers, have to travel 13 km over the mountainous road to the nearest government hospital in Gopeshwar for major illnesses.

Illnesses only serve to reduce working efficiency and affect family welfare. But, more dangerously, the ICAR paper points out those rural women face higher risks of morbidity and mortality because of strenuous physical work. Additionally, the paper identifies that nutritional status as well as nutritional knowledge of hill women is unsatisfactory and needs interventions.

For all this hard work and physical stress, the women say that yield from their fields is diminishing. The adjacent mountains are forested and home to monkeys and wild boar. The women allege that these monkeys aren’t theirs, that they are brought in from the city and released near their village.

“We barely get a few handfuls of produce. We end up buying the bulk of our food from the shops at steep prices,” Chandrakala told VillageSquare.in.

However, the meager returns are no reason for them to stop. Farming is an inherent part of their culture. They will not leave the land fallow. But Chandrakala doesn’t think their children will take up these backbreaking jobs.

“We might just be the last ones. The next generation doesn’t want to do this work,” she told VillageSquare.in. “Look around, you won’t see one youngster in the fields. It is just oldies like us carrying on.”

Shatakshi Gawade is a Pune-based journalist.

Shatakshi Gawade is a Pune-based journalist.