Faced with longer and hotter summers, many farmers in the Sundarbans have embraced organic farming with local crop varieties that are better adapted to a changing climate and fetch adequate returns as well 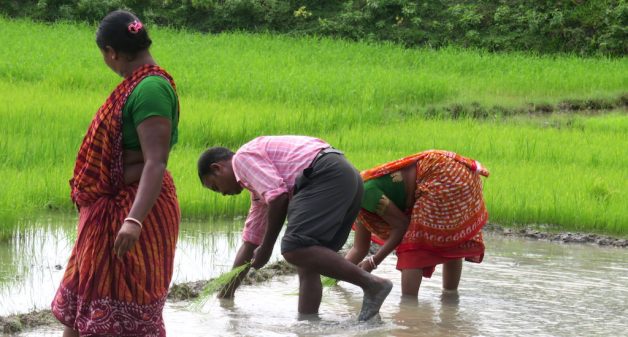 Umapati Sarkar, a progressive farmer in the Sundarbans in West Bengal who travels extensively to promote organic farming among the people, has many stories of his journeys. Sarkar, who is now in his sixties, has noticed that the climate has been changing in the Sundarbans, with shorter springs, and longer and hotter summers. Farmers have to change their farming practices to adapt and survive, he says.

“High yielding rice came into our Sundarbans villages in the early eighties, and so did urea. The government village worker in those days used to approach farmers to grow these rice varieties and even used to pay them if they were willing to grow it. And slowly, this caught on due to the high yields,” he said. “I kept on cultivating high yielding varieties till the end of 1994-95, when the cost of fertilisers and pesticides cancelled out any gains that these rice varieties brought through higher yields. I could not manage any more and slowly turned to organic.”

Sarkar said that the earnings of his uncle, who did not cultivate high-yielding varieties, remained stable. “But my soil was damaged. So from 1996-97 onwards, I have encouraged people to go organic. People often did not listen but after Cyclone Aila, they learnt the hard way that local varieties are hardy and will give them returns that can see them through in the worst of times.”

Aila, which caused extensive damage to farmlands in the Sundarbans, was a hard lesson for farmers in the region. Still, going organic took a long time. The reason was simple. “Often, market connectivity for organic produce was a problem. There had to be a situation where their food security got taken care of, and they also got good returns,” Sarkar said. “Today, we at Mrittika Prayas are trying to build a model where food security and market returns are integrated through organic farming, and we set a good example of adaptation to climate-friendly agriculture.”

Mrittika Prayas is a non-profit based in Korakathi gram panchayat (village council) area in the Sundarbans. To experiment with a market-oriented model that caters to both climate-adaptive farming and nurtures people’s knowledge of organic farming practices, it built a people’s knowledge centre called Gyan Vikas Kendra at Dhuchnikhali in Korakathi.

The centre has evolved a training module and a market-linked strategy to promote climate-friendly farming in the Sundarbans, which seems to be yielding a slow but sure switchover to organic farming of rice, turmeric, and pulses, with other items in the pipeline. The marketing channel is an online platform called Amar Khamar (which means my farm in Bengali).

A survey conducted by the centre in April 2017 found that 70% of farmers in the area practised agriculture that relied heavily on chemicals, while only 10% used organic inputs exclusively. It takes substantial convincing for people to switch to organic farming. 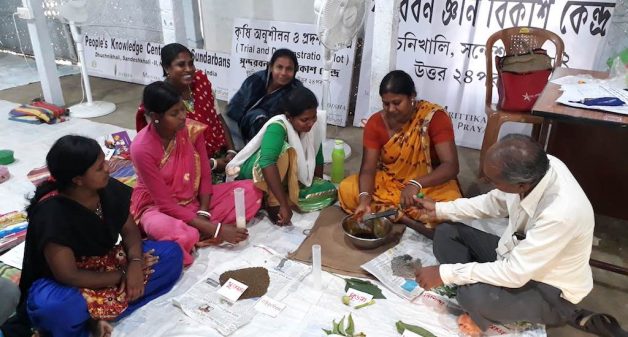 The initiative demonstrates that overuse of fertilisers damage soil health. Poor absorption of fertilisers such as urea by crops leaves a sizeable amount of ammonia unused, which adversely affects the environment. Broadly, some 40-50% of the applied urea can be utilised by a plant. “Nitrate toxicity of the soil is an inevitable outcome of application of urea,” said Monidipta Saha of Sasya Shyamala Krishi Vigyan Kendra, which provides agricultural extension services. “It affects soil health.”

Likewise, phosphate fertilisers are a source of arsenic, which can cause chronic kidney disease in humans. Chemical pesticides, applied in high quantities, also drive up the cost of farming. The cost calculations done by farmers are often partial and do not reflect the true losses by staying on with chemical input-based farming, says Sarkar.

To veer the community away slowly from chemical input-based farming, Mrittika Prayas has been running an innovatively designed training course for farmers at the people’s knowledge centre. It is a 19-day programme that trains farmers on ecosystem management, agriculture, fishery, livestock, financial literacy, entrepreneurship training and disaster management.

Although people outside the community started the knowledge centre, most of the knowledge trainers who have now taken charge are from within the community. The training is now modified to weave in local knowledge to make it rooted in ground realities. “Our previous year’s learning as trainers has helped us make the training module far more retentive,” said Aninda Sundar Das, project manager, Gyan Vikas Kendra. “We have received positive feedback for this (modified) module.”

Other innovative interventions in the training modules include teaching farmers to grow vegetables in locally improvised shady spaces during the extra hot summers for their own food security, and experimentation with honeybee culture in the fields to encourage pollination and also honey for domestic consumption.

Harekrishna Das, who teaches agriculture at the centre, points to the beneficial effects of weaning people away from high chemical input farming. “Earlier, my family may have had to spend Rs 5,000 to Rs 7,000 a year on medical expenses,” Das said. “Now, this just does not happen.”

Convinced that local varieties of rice are hardier and more adapted to survive through the vagaries of weather, Das has conserved some 140 local varieties on site. He hopes that his newly honed entrepreneurship skills, along with the supply chain that Mrittika Prayas has with online platform Amar Khamar, will enable him to sell his rice varieties profitably.

Mrittika Prayas’ executive committee members Shyamali Gayen and Sandhya Mondal are hopeful of a progressively strengthening entrepreneurship model that will be put in place through the combination of Gyan Vikas Kendra and Amar Khamar online selling platform. “The uniqueness of this training lies in the ease of its implementation and field orientation,” said Gayen.

Farming costs have also declined by adopting better practices. Today, it costs Rs 3,700 to produce organic rice over one bigha (0.33 acres) of land, while the equivalent for high yielding rice is Rs 5,500, the proponents claim. Profit for organic rice is about Rs 3,300, while for high yielding, it is about Rs 2,500, according to Jayanta Sarkar, who oversees product quality at Mrittika Prayas.

The organisation is also preparing an evaluation study to monitor the effects of one year of training in entrepreneurship through the organic farming route.

Perhaps the most important takeaway from the initiative is that community efforts are the best way forward to climate-adaptive agriculture. “This model enables us to empower farmers without political intervention and without monetary incentive,” executive committee member Harekrishna Das said. “We show farmers how they will benefit. That alone helps us to make this exercise a success. We could not ask for more.”