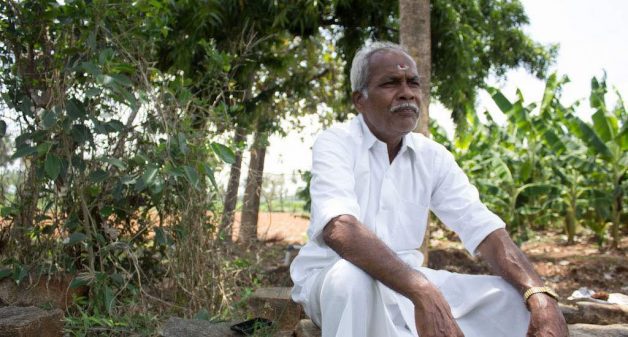 Odanthurai panchayat, which had virtually no development prior to 1996, saw dramatic changes after a panchayat president, R. Shanmugam, worked on access to basic facilities — water, energy and housing. The villagers, who were living in abject poverty, were uplifted over a decade through a host of development schemes.

Houses were built for people, and in a decade, the villages were declared hut-less, had continuous water supply, nightlights and good roads. Odanthurai, now a model panchayat, shows how an honest, corruption-free administration can bring development, and how other villages can follow this model.

Vijayalakshmi, a 48-year-old woman from Oomapalayam village in the Odanthurai Panchayat, 40 km from Coimbatore, remembers the day where her daughter, who was in class VI, travelled for a long distance to school. “There was only an elementary school in the village,” she told VillageSquare.in. “Later, a bus service was arranged by the panchayat so that rural children could go to Mettupalayam and continue their schooling.”

“Since children used to travel almost 10 km to attend school, there were many dropouts,” Shanmugam, former panchayat president of Odanthurai, told VillageSquare.in.

Development took a paradigm shift in this village council after Shanmugam won the local elections as an independent candidate in 1996. About 10 villages are under this panchayat.

“When I joined as the panchayat president, there was zero development,” Shanmugam said. “Only one village had drinking water. My immediate step was to ensure all the villages received water supply.”

After Shanmugam joined, bore wells were cleaned. “We passed a resolution for building overhead tanks. In summer, there could be water deficit as bore wells may go dry,” he told VillageSquare.in. We have the perennial Bhavani River here, so we thought, why not tap this water and supply to the villages here?”

In 1998, the panchyat gave a proposal to the government. Shanmugam says, “The government said that it was not possible to disburse funds of this large a scale for just one panchayat.”

In 1999, when the national rural drinking water program, the district collector told Shanmugam that their proposal could be submitted if money was pooled from the community. This was a community participation scheme, where 10% of the contribution was to be from the community and 90% from government of India. The World Bank supported this initiative.

“A meeting was arranged with the villagers. The community contributed Rs 4.8 lakh, and we received Rs 480 lakh from the government,” Shanmugam said. “Villagers gave whatever they could — Rs 100, Rs 500. People who had more money contributed more.”

At a national level, the plan was to implement the project in 52 districts. Tamil Nadu was announced as the first state to receive funding for this project. A water filtering station, a 13 km pipeline, and overhead tanks were built in a span of 11 months. By 2000, bacteria-free, 24/7 water was supplied to the villages. 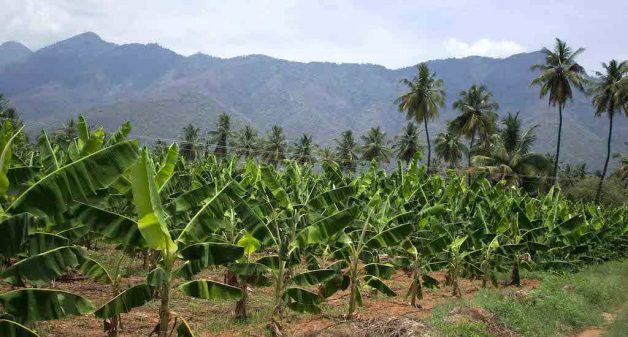 A banana farm in Odanthurai (Photo by Sharada Balasubramanian)

“Earlier, I used to go to a stream and fetch water in the dark — late evening or early morning — along with my children. The water quality was not good,” Vijayalakshmi told VillageSquare.in. “Once in a week, we carried our clothes for washing in the stream, spent the entire day there and returned home by evening.”

“Now, with water in the pipeline, right at their homes, women in these villages are finishing their work early and sending their children to school on time,” said Shanmugam. In a span of a year, the villages under the council became water-independent.

Earlier children travelled to Mettupalayam to attend school but now there is primary school, a middle school and a high school in the village council area. Shanmugam says, “As there are schools is in the village, there are no dropouts. We have given all the educational facilities here. Where 40-50 children were studying earlier, the numbers are now 350-400, and this is a huge change.”

Almost 90% of the people in the villages under the Odanthurai panchayat are agricultural laborers. Tribal communities lived here in 400-500 huts. The panchayat president said, “I thought of how we can uplift people living below the poverty line. Just then, the late Chief Minister J. Jayalalitha announced the pudhu vaazhvu thittam (empowerment and poverty reduction scheme).”

A village poverty reduction committee was set up in the panchayat, where every village had a president. Social mapping was done, and the needy and poor people were identified.

The panchayat leader then introduced a scheme through which people, in times of need, could avail small loans. “As the panchayat developed, there were other panchayats who wanted to visit us and see how things worked here,” Shanmugam told VilageSquare.in, “We asked each panchayat to pay Rs 1,000 for seeing and understanding our development model. We collected Rs 1.65 lakh like this and put in the microfinance scheme.”

This microfinance scheme was specifically for emergency expenses of individuals. “If people need smaller amount like Rs 500 or Rs 1,000 for buying school books, uniform, or for visiting a doctor, they can avail this loan by writing a request,” said Shanmugam. “The money is given on the same day with low interest. This was a scheme for bringing up individual families.”

People in need of income or jobs were also given free training. For instance, training was provided for setting up small shops, making jute bags, mats or starting a small enterprise. Bank loans were also arranged for those who wanted to start businesses.

The panchayat has also set up its own windmill and is generating income out of it. Every year the panchayat sells additional power generated from the windmill to the state electricity board and earns a revenue of Rs 19 lakh a year.

Shanmugam said, “If we can implement government schemes in an appropriate manner, we can bring development.” He believes that if the local administration in Odanthurai panchayat can transform from zero development to becoming independent in a decade, with no one below the poverty line, this is possible anywhere else in India. For Shanmugam, support from villagers was a key reason for the development.

This is also a corruption-free panchayat. Every paisa was put into development of the villages, and that is the reason for the success of this panchayat. “If any village wants to bring development, there should be no corruption, only then success is possible,” Shanmugam asserts.

When he joined, the population under the council was 1,650. Today, 9,500 people are living in these villages. “People now have access to water, energy, good roads and houses, and that is the reason why people are migrating to these villages,” Shanmugam told VillageSquare.in. “Usually people talk about rural to urban migration. However, here the reverse is happening due to all-round development.”